"We hold these truths to be self-evident, that all men are created equal, that they are endowed by their Creator with certain unalienable Rights, that among these are Life, Liberty and the pursuit of Happiness." 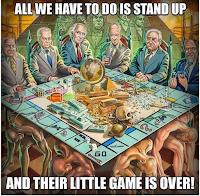 Recent events with a Chinese virus spreading through the world have resulted in unprecedented, vigorous response from governments around the planet.  To deal with this pandemic, governments have ordered businesses to be closed, people to stay home, and shut down open spaces such as parks and golf courses.


In many countries, the government has the power and authority to issue these kind of declarations, and people are used to being ordered to do things.  Its a historical and traditional thing for most nations around the world.  In the United States, the opposite is true: government is specifically and directly forbidden from doing such a thing.  The US Constitution clearly states that people may not have their rights curtailed or blocked by the government, that governments have only very specific "enumerated" or specified powers that they can carry out and nothing beyond that.

In other words, there is no legal authority to carry out these restrictions.  They cannot order us to stay home, legally or constitutionally.  Such power does not exist, and the exercise of it is illegal and nullified by the US Constitution.


However, the USA still currently has directives from government to stay out of parks, stay home, not travel except when absolutely necessary, even wear masks in public.  This isn't universal, some states still do not have these orders in place.  But most do, and the federal government strongly recommends these steps be taken.

The thing that governments and citizens of the USA are very well served to remember is that people are going along with this not out of obedience or fear of the government.  American people are not obeying or bowing to their authorities.

We are choosing to go along with what is being said out of caution and concern for our families.  We are not being forced to do this, we have unalienable rights of association and commerce which the government not only may not but cannot revoke. It is impossible for the government to take away our rights, it is only possible to attempt to limit and stop our exercise of these rights.  That is, the rights themselves are an innate part of being human, and cannot be removed.  They can only be limited in their expression.  I still have the right to liberty, even while jailed.

Americans are choosing to, voluntarily, limit the expression of our rights for the time being as it seems wisest to do so -- as was done during WW2, for example.  We chose to limit our purchases, travel, and use of resources during WW2 in order to aid with the struggle against evil.  Not out of compliance or cowering to the government's power, but because we saw it as necessary, temporarily.

When the time comes that these restrictions and limitations are no longer wise and necessary, we as a people will refuse to go along with them.  And any government or authority which seeks to retain these restrictions or expand upon them at that point should seriously reconsider.

Things are already very volatile and stressed in the USA to begin with.  People are already on edge and frustrated, angry, and feeling extremely abused by those in power and the establishment (media, academia, etc) already.  Being cooped up and constantly bombarded with fear tactics to sell advertising and manipulate politics by the media is not setting well on people.

Put simply: the governments of the USA and those in power are sitting on a powder keg and would be well advised to keep that in mind.
Posted by Christopher R Taylor at 9:59 AM