Well I'm almost finished work on a gaming supplement that's taken me years to write and edit.  Its all done and packaged except for the cover art.  I'm posting several pictures that I'm looking at using for the cover art here and I'd love it you would let me know which one(s) you think are best.

But first, what is the Jolrhos Field Guide?  Well its a gaming supplement that is part of a series of books meant to provide a full campaign setting for role playing games.  What that means is that its a book with information in it about a fantasy world, a setting for people to run games in.

For more information on what this book is about you can check the page I created for it on my website, but in brief this is a world setting with geography, economics, politics, and info on cultures and races, but also tons of details about the world other than "things to kill and loot" which most game books focus on.

For example, it has strange and unique creatures that live in the world which can be taken advantage of by players such as a porcupine like creature which keeps predators at bay, or a moss that has peppery dust on it which is released when disturbed.  And the book also has magical herbs, poisons, amazing plants, and the tradeskills which can take advantage of all this such as alchemy, engineering, leatherworking and much more.

Edit: sadly, I didn't get any feedback from the dozens of people I know saw the post, so I went with what I thought would work best. Here's the final cover design: 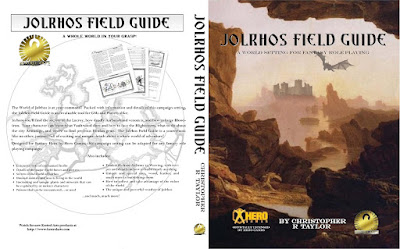 Posted by Christopher R Taylor at 11:15 AM