NOT SO SUPER, MAN

Early, Clark decided he must turn his titanic strength into channels that would benefit mankind...


I got a copy of Superman Archives 1 from the library and read it.  These are the very earliest Superman tales, his first appearances and some key early issues.  Action Comics 1-2 is in it, as well as the first appearance of Lex Luthor among several other early comics.

Its interesting stuff for a lot of reasons.  This is very early in the Superhero game; there were some costumed adventurers and crime fighters around such as The Shadow, but this was the first real superhero comic book and it borrowed heavily from an earlier novel called Gladiator by Philip Wylie. 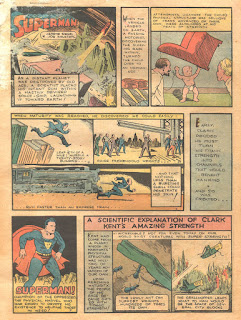 As most people know, Superman didn't have flight at first.  Most of his powers were granted him in the silver age (super-ventriloquism, etc).  At first he could just jump an eighth of a mile (660 feet, or 2 football fields) and over a 20 story building.  He wasn't completely invulnerable either, a "bursting shell" could harm him.

In fact his origin story is a bit different as well.  The Kents find the boy and turn him over to an orphanage, then decide they love him too much and take him back. The Orphanage is glad to be rid of this child who can juggle cars.  Nothing more is said of the child or his oddness by anyone.  In fact, Superman is so blatant in use of his powers that just about anyone could figure out Clark Kent is Superman.

In one issue, Clark Kent takes over for a football player he somewhat resembles and plays a few games for him, showing off his powers without any restraint.  In another he does the same for a boxer, one-shotting enemies and ignoring punches.

Some of Superman's behavior is a bit shocking as well.  In issue 2 he goes to stop a war in some fictitious nation and eventually catches one of the generals.  He just picks the guy up and hurls him "like a javelin" with all his strength over the trees.  In another he grabs someone out of a crashing plane and interrogates him, leaving everyone else in the plane to simply die.  In third instance a techno-villain hits him with lethal electricity, which he ignores, then grabs the guy frying him to death.

Superman casually ignores people's deaths around him, if they're bad guys.  Too bad for them their criminal base sunk to bottom of the ocean when I busted out.  He even kidnaps the football star and drugs him, paralyzing him so he can take his place.  Why do this?  Well he overheard some thugs talking about bringing in a ringer so they can fix the games and throw them for gambling.

Another change is that Superman starts in... Cleveland, Ohio.  He works for the Star for a while, and only when Superman gets his own comic does he end up at the Daily Planet, in Metropolis.  Lois Lane is there from the beginning, and she despises Clark Kent right away.  She is pretty cut throat, too, even trying to drug Kent to get a story.  She pulls nasty tricks on him several times trying to scoop Kent, which makes his attraction to her somewhat mystifying.

Superman's ethics are pretty heavily defined by the author, Jerry Siegel.  He's extremely anti-war and isolationist, pro-union (even protecting unions from mob influence and takeover in one episode).  He fights against a corrupt coal mine boss in a curious issue where he is almost never in costume and only uses his powers a couple of times, letting the story unfold on its own.

Superman's costume varies several times, even in the same issue sometimes.  His belt appears and disappears, his boots change, the shield on his cloak shows up and goes away.  He's barely in costume in several stories.

Back then people weren't quite as picky about that kinda stuff.  They just wanted fun adventures and frankly it was mostly little kids reading them anyway and they aren't as fixated on little details and nit picking. 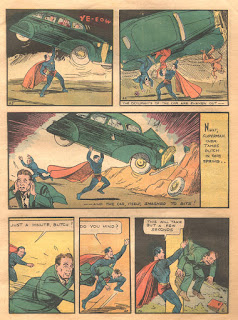 Oh, and this climactic image, so famous, that's on the cover of Action Comics 1?  Lois Lane is inside the car.  She's been kidnapped and Superman just bashes the car around with her in it bouncing around like popcorn (no seat belts back then kiddos).  She's unharmed of course, but that definitely wouldn't be the approach these days.

In a way its kind of fun to read them and imagine this being early Superman kinda learning the ropes.  He had to figure out how to best use his powers, they're still developing (by the Lex Luthor issues, he's able to jump to the edge of space!).  He doesn't always use the smartest tactics, preferring to brute force  his way around and intimidate people.

And boy does he.  Clark gets sent to a wife beating story, Superman kicks the door in and slaps around the guy like a punching bag.  Mobsters don't want to talk, so he throws them in the air then crushes a gun in his bare hands and threatens to do the same to their head.  It really feels like geek wish fulfillment: here's what I'd do if I could juggle tanks.

Overall its an interesting experience to read the old comics, particularly from a fan's point of view and someone who plays role playing games like Champions where you are a superhero.  Superman has long been thought of as the iconic good guy who knows what to do and always does right, but these old comics, he really pushes the gray areas a lot.  Its worth looking the comics over, because they're not only an interesting historical exposure to comics (the last panel of several of them is stuff like "Coming soon: BATMAN" first appearance stuff) but of the times and attitudes then.

Oh, and yes, Lex Luthor has red hair in his first appearances.
Posted by Christopher R Taylor at 9:47 PM