"We are only as strong as we are united, as weak as we are divided"
--The Goblet of Fire

There is an interesting trend in pop culture these days which grew to full form in the Obama years.  Books, music, movies, and so on started in the Clinton years showing the future as bleak, miserable, and scary.  For the first time, major films depicting a fictional president as a bad person, even criminal murderer, began to come out.

Dystopian futures have become quite popular in popular culture; a future where things have gone wrong, where tyranny, oppression, sadness, lack, and even disaster are the main themes.  Zombie apocalypses, post-nuclear holocaust, economic collapse, and so on.

And in the middle of this, young people have been fed a steady diet of dystopian novels such as Hunger Games, Maze Runner, Divergent, even Harry Potter (whose books go from somewhat sad to miserable and bleak by the seventh novel).

Running through these books is a constant theme of the weak and lowly becoming powerful; of someone who is chosen or special or uniquely gifted taking on the powerful and wealthy and triumphing over the dystopia to reshape their world.  Young snowflakes raised by helicopter parents to face no hardship or difficulty, challenges, or failure are raised on these stories of sadness and rebellion defeating the Big Evil.

For some time now, I've pondered what effect this has on psychology and how it may explain a lot of the attitudes and behavior of young people today. How being raised to never face difficulty but having your head filled with tales and psychology of misery which the few good ones overcome to triumph in a new age of wonder and light affects young minds.

Given that the fictional narratives found in novels, movies, and television shows enjoy wide public consumption, memorably convey information, minimize counter-arguing, and often emphasize politically-relevant themes, we argue that greater scholarly attention must be paid to theorizing and measuring how fiction affects political attitudes. We argue for a genre-based approach for studying fiction effects, and apply it to the popular dystopian genre. Results across three experiments are striking: we find consistent evidence that dystopian narratives enhance the willingness to justify radical—especially violent—forms of political action. Yet we find no evidence for the conventional wisdom that they reduce political trust and efficacy, illustrating that fiction’s effects may not be what they seem and underscoring the need for political scientists to take fiction seriously.

What they're saying here is what those in other disciplines have long known: the stories we grow up on shape our worldview and understanding not only of ourselves, but of the world around us.  They help mold our psychology and outlook to a profound degree.  If you grow up on a steady diet of cheerful hopeful, positive, and encouraging stories, you will tend to be more of that sort of person.

And if you look about you, it is pretty clear that young people raised on these stories of Vampires and freedom fighters and wizards forced to live under the stairs have taken these stories to heart.  They don't face difficulty or sadness; their lives are enormously blessed with riches, health, comfort, and ease.  But they have been raised to expect hardship and darkness and look for it around them.

And they think they've found it.  Remember, the teens of 1995 are now in their 30s and 40s.  They're the ones running the news room, the Hollywood studios, the Television programming.  They're the ones who are directly and most significantly impacting popular culture.  And these are the driving force behind "The Resistance" a misnamed movement if there ever was one.

Having grown up believing that the chosen one can rise up to overcome the great evil, that the future holds only bleak sadness and difficulty that the few can defeat, they are hungry for just such a world and think they found it with President Trump.  Older, cynical politicians are eager to exploit this viewpoint as well.

There's a reason that these people continually refer to events and people in terms of the books they grew up with and loved: Harry Potter most prominently.  Its not just because that's what everyone does (previous generations used to refer to the Bible, to great works of literature, to ancient myths and legends, and faerie tales).  Its because they have been raised to see the world through that lens.

Consider, in the past, stories people grew up with as compared to now.  Robin Hood is somewhat like these tales, but always from the perspective of heroism and joyful exuberance vs a single evil antagonist, not an overwhelming, crushing miserable culture of dystopian darkness.  The Bible is the story of redemption and hope.  Faerie tales are stories of wonderful things happening to help people overcome trouble.  Myths and legends tell of great deeds of power and glory.

In the past, the stories were about heroism and goodness against bad.  Now its stories of special people defeating a world of darkness.  Lord of the Rings deliberately had the protagonist the weakest and least -- the anti-Chosen One -- to fight against the rising darkness.  These new tales are always some bullied nobody, someone unknown who is mocked... that turns out to be The Greatest Of All Time, specially gifted beyond all those around them.

Older stories were about heroism, these new ones are about being owed great things.  You're not just a guy trying to make his way, Harry.  You're a Wizard surrounded by mundane nobodies who are stupid and mean.  You're the best archer ever.  You're the one character who can defeat the enemy, not out of your courage and heroism, not due to honor and hard work but innately you're just special. 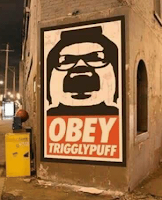 Every generation has their stories they grew up on and were shaped by; this generation has a combination of a super protected upbringing, a lack of moral compass, and dystopian tales resulting in Trigglypuff and angry professors calling for "muscle" to remove a journalist.

Remember President Obama's campaign?  "We are the ones we've been waiting for."  You are special, you will save the world, you will be the future you want to see and everything will be wonderful once all those stupid old poeple die.  Maybe we should help them along.

Never before in my lifetime has a generation so privileged and well treated acted as if they were the most put upon and miserable people of all time.  Facing a reality that isn't their snowflake upbringing, these younger people wail in despair at how unfair it is they have to pay their college loans back and that somehow an election was lost.

Even the Russia Russia Russia narrative is part of this.  We didn't really lose, a sinister evil cabal stole it from us!  There's a bad guy out there we have to as the special chosen ones, defeat and bring about a new era!

Ultimately this is a sad reminder of what we as the older generation failed in: raising children properly with moral guidance, good teaching, and challenges that force them to grow into the adults who can face the real world.  They're sad and deluded, mistaken and wrong, but they are that way because we failed them.

Not everyone of the younger generations is a mess like this, no more so than everyone of older generations avoided these failures.  There are plenty of people in my generation and older who are part of this pathetic Resistance nonsense, singing the same songs about how they'll overcome the great Hitler of their time.  I mean Trump, not Bush, who was Hitler before him and now is considered not such a bad dude.  But this time he really is, honest!

How we turn this around I have no answers for.  It may simply take some grand failure or disaster that forces people to face the world as it is instead of how they wish it or believe it to be.  911 did that for a short time.  Reality shows like Survivor plunged in popularity, for example.  People were suddenly not very interested in faked challenges when forced to look at the real challenges of life.

Barring that, I don't think there's any way to reach these people.
Posted by Christopher R Taylor at 11:21 AM