"Cities make ferocious men because they make corrupt men. The mountains, the sea, the forest, make savage men; they develop the fierce side, but often without destroying the humane side."
--Victor Hugo Les Miserables 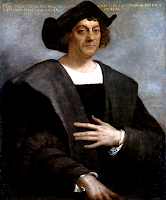 One of the most enduring myths is that of the noble savage.  This is the theory that civilization corrupts, that it causes humanity to go wrong and that in a primitive state, all is in equality and peace.  Rousseau is the most well-known proponent of this idea, although he develops it in a different direction than most today.  Rousseau argued that over time, divisions and troubles developed as people gained sophistication, and as a result civilization with its laws and social contract (I give up some small things to gain better things as a whole) develops.

"Human greatness does not lie in wealth or power, but in character and goodness. People are just people, and all people have faults and shortcomings, but all of us are born with a basic goodness."
--Anne Frank

However, there is a continuous worldview through all history and all cultures held by some which takes this idea even further.  There is a portion of humanity which believes that all people are basically, innately decent and good, but are corrupted by outside forces.  Further, since people are basically good, we need only find the proper policies and enforce the proper ideas and we can achieve paradise, a utopia of peace and happiness.

Men in a state of nature do not know good and evil, but their independence, along with “the peacefulness of their passions, and their ignorance of vice”, keep them from doing ill."--Jean-Jacques Rousseau

This worldview usually identifies the bad influence as civilization or a certain culture, religion, or a given race (jews, blacks, whites and especially males most recently) who are to blame.  If only those things were changed or eliminated everything would be wonderful!

Now, anyone over a certain age should have lived long enough and learned enough history to realize this is patent nonsense.  Any parent knows that even the tiniest baby with no influence or outside corrupting forces can be horrible for no reason at all.  What is bad is within us, not without us.  We're born with it and struggle against it all our lives.  There is no place we can go where we're away from the bad things, because we bring them with us.

This is why the old saw about a mugged liberal is told: "a conservative is a liberal who's been mugged."  Some events, some experiences are so eye opening and brutal that they force someone to reexamine their basic understanding of the world and realize it was wrong.  People are not basically good, they are not basically noble and decent.

Now, logically and philosophically this worldview falls totally to pieces with any examination.  If people are all, without exception, basically decent and good... where did bad people come from to begin with?  That is, if outside influences and people are what corrupted the first person who went bad, what is the origin of those outside influences and people?  This is like the idea of something coming from nothing: science, logic, common sense, all sources of understanding know that that is not possible.  There has to be an origin, a place the bad came from.  And that cannot be true if everyone is basically decent and good at heart and origin.

COLUMBIAN SIN
But consider a moment the date.  It was Columbus Day yesterday, where historically, Americans have celebrated the discovery of the "New world" by Christopher Columbus' little fleet in 1492.  Now, historically there were previous discoveries of parts of the Americas by Europeans.  Vikings encountered Newfoundland in roughly 1000 and even had a small settlement there.  Some writings indicate that an explorer named Brendan encountered the Americas in the sixth century AD.  Chinese apparently had landed on the Pacific coast as early as 3300 years ago.

But when Columbus landed on the Caribbean Island of San Salvador in the Bahamas, he set off a wave of exploration and colonization which the previous discoveries had not.  The Viking and Chinese settlements did not last, but the post-Columbian ones did.  And that is an incredibly significant historical event, no matter how you view history.

In the 1970s it became popular on the left to consider Columbus a monster, a villain who gave the innocent and peaceful natives diseases, enslaved them, wiped out their culture, and destroyed all that was good.  This theory teaches that the American natives were all good and peaceful and wonderful and just and true and righteous. They all ate free trade non-GMO gluten free food and were perfectly multicultural and non-judgmental, free of war and with perfect gender equality. Columbus, an evil white European showed up and ruined it all. In short, Columbus he infected the Eden-like paradise of the Americas with his Euro-masculinity.

And the origin of this theory is that of the Noble Savage.  There were people living outside the evil corrupting influence of White European Males, and Columbus found them and ruined everything.  That's why when you hear someone talking about this, they never mention the nearly-constant wars, cannibalism, human sacrifice, rape, pillaging, genocide, disease, poverty, and incredible lack of technical and scientific, artistic, and literary knowledge of the native peoples of America.

Columbus was a man of his time, and a particularly greedy one at that.  He ripped off his own people, acting as the King's supreme representative and authority in the Americas (which at the time was not known to be as vast as it is).  He took credit for what others did, he took over what they developed, he took the riches they found, and so on.  And yes, he and his men enslaved the local natives, and because of their culture of "free love" spread European venereal diseases among the natives they were not exposed to before.  Entire tribes were wiped out by the infections they had no resistances to.

Of course, the natives spread disease among the Europeans they hadn't been exposed to, either, such as Typhus and Syphilis, and the natives were murderous and killed Europeans but those are details that modern revisionist historians either ignore, gloss over, or present as a rough sort of justice: they had it coming for daring to set foot in the Eden of the Americas.

Objectively, neither side was particularly admirable, as one would expect if you understand innate and original sin.  If what's bad comes from within us rather than outside influences, then its spread evenly throughout all humanity without regard to creed, culture, race, or location.  The natives were bad because people are bad.  The Spaniards and Columbus (who was Italian) was bad, because people are bad.

PERFECTION
The worldview of the noble savage and innate goodness faces continual and brutal opposition by reality and history, but the understanding that people are basically bad and need redemption is constantly supported by reality and history.  There's no way to look at the world around you, the man in the mirror (or lady), and the history of humanity and come to any other sane conclusion.

Yet, the idea persists and throughout all time, all leftist movements and all leftist philosophies share this one common thread.  No matter when or where or what their -ism is, all leftists cling to this theory: if you give me enough power, I can make everything wonderful, even if we have to do some bad things along the way to clear the path.  From the French Revolution to Marxism to Fascism to postmodern progressivism, its a continual thread of thinking you can fix everything because people are perfectable on earth.  All it takes is the right policy and we'll all be perfect!

And in the push to make this happen, over 150 million people were put to death in the 20th century.  In the name of perfecting man and bringing about paradise, a mountain of skulls was stacked up the likes of which humanity  had never seen before.

So when you hear complaints about Columbus, ultimately, that's what this is all about.  And when people talk about indigenous people's day instead, they're presuming that the peoples of America started out there, rather than traveling there from other lands, probably Asia.  After all: how long does a people have to inhabit an area, until they become natives?  Is over 400 years long enough?
Posted by Christopher R Taylor at 8:27 AM