I apologize for the lack of content, I've been busy but not writing.  My next major project, the Jolrhos Field Guide, is getting closer to completion and I am at the stage where I am finishing off artwork.  There are quite a few little illustrations strewn through the book as well as some large pieces.  In total there are almost 200 pieces to finish, and that necessarily takes quite a bit of time.

Hence, my focus and energy has been on the book to attempt to finish that up.  By way of some compensation I'll link a few of the rough scans here so you can see a bit of what I'm doing at least.

Style wise I am influenced by the great French illustrator Moebius, and while he's five hundred times the artist I am, I love his clean lines and careful lack of shading.  A lot of artists are so heavy on big, bold blacks that it is while dramatic feels awkward to me: life almost never has that deep a black for real, its almost always shades of gray. 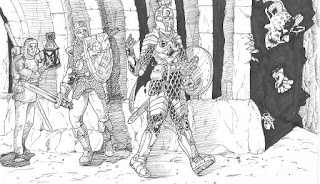 That said, some images are just better with some darkness, like the swamp image above (heavily influenced by Walt Kelly's Pogo illustrations) or the adventurers in a dark area with heavy lighting. 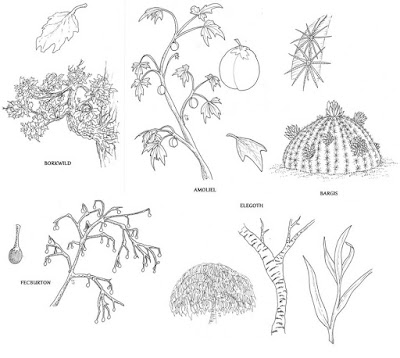 Most of the book's illustrations are small example images of various unusual or world-specific plants.  Some are magical herbs, some have some odd effect if used correctly, some are dangerous, some are sources of poisons, etc. 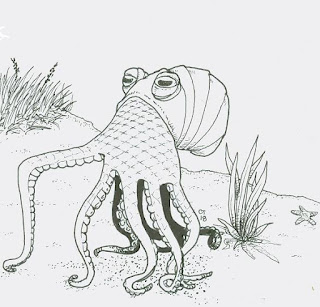 Also included are a lot of odd creatures; things that aren't truly monsters, but are useful or dangerous to players in different ways, and who fill the world up with something unique and interesting to see or interact with. 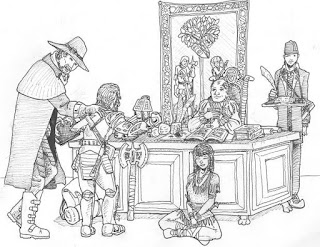 Then of course there are incidental illustrations; just pieces of art to break up a page's block of text and give a sense of what is being discussed such as finance or weather 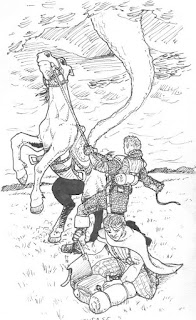 Overall, I am working hard on trying to give characters different and interesting equipment and armor, hairstyles, physical looks, and equipment while keeping them within a certain range of familiar and comfortable designs (and logical, useful ones) for a fantasy setting. 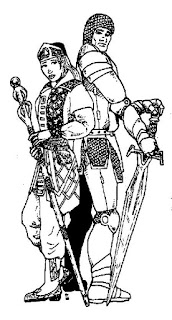 The design philosophy for me in this world is "unique but familiar" so that it is its own world and setting unlike any other... but not strange or jarring, a world that you can easily step into with your mind.  I am hoping to get this book done by the end of Autumn but we'll see.  Its been delayed quite a while already by health issues and simply being a much more monumental effort than I'd first envisioned.

And I have a certain standard, a vision of the level and quality of publication that I insist on and will not give less than, so I will see that before I put it on the shelf.  To do any less would be unfair to customers, and would not match the level of work and design I put into my other books.
Posted by Christopher R Taylor at 7:37 PM