"Cable, who would be dumb enough to pay extra to watch TV shows??" 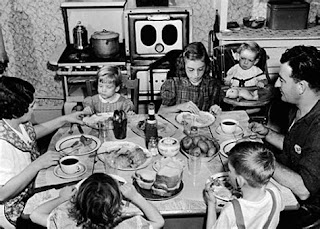 Its almost an alien concept today, but it used to be very common in the United States where a family would have one earner and have many kids.  They'd have a middle class life, with dad working at the factory or rail yard or grocery or whatever, mom staying home, and 4+ kids.

Today people look at that and are baffled, uncomprehending.  How is this even possible??  When they ponder it, they decide that the dollar doesn't buy as much as it used to, people just aren't making enough money so they can't afford kids and both have to work.

Now, inflation has taken a bite out of our money and for the last ten years or more, earning has been pretty flat, without really keeping up with inflation.  Because the economy hasn't been solid and inflation worse than the official, carefully massaged numbers we get from the US federal government our dollar doesn't go as far as it once did.

But even in economic downturns and bad times families still made it.  How was this possible, have things changed so its impossible today?  Well I'm not going to argue this is the way things must be done, nor will I argue that it is necessarily possible.  What I'm going to do here is show the differences in spending habits and lifestyle that we have now compared to back then and its up to you to come to your own conclusions.

THE NEW EXPENSES
The first big issue is that people have expenses today they never had in the past.  Just 20 years ago, a cell phone was more or less a luxury, something the rich had. Now its almost considered a necessity, not a luxury, but a minimum quality of life requirement.  Each cell phone costs hundreds of dollars individually (less as a big package) and each month, those phones all cost money to charge and pay for their "data" and phone packages. 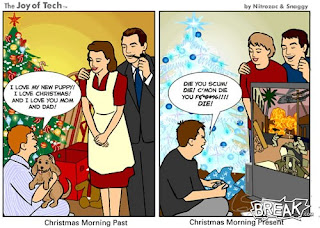 That's a couple hundred dollars extra a month that Ma and Pa Barker didn't have even in the 1990s.  Add to that the cost of TV and internet, and the price goes up even more.  Even if you don't have cable TV (as increasingly, families do not these days) that is being replaced by Hulu and Amazon Prime and Netflix and a score of other alternatives.  And none of them are free.

And on top of that are additional subscriptions.  Paying for that World of Warcraft account is just 15 a month but that's an expense that nobody had in the 90s either.  Those console games are a pretty major cost just to buy the consoles, then each game, and any Downloadable content, and with them any subscriptions and you're looking at thousands of dollars a year.  And that's just games, it doesn't include services like Spottify and other expenses for entertainment.  None of this stuff existed in the past.  They were costs that Ma and Pa Barker never even considered, let alone had the option of.

HARD CHOICES
And even things like snacks have gone up.  That "coffee" milkshake you get every morning and at lunch is ten bucks or more a day.  Even just a coffee is almost $2 at one of these places.  Dad the steel worker would get a 25 cent coffee at the diner and head to work.  Free refills.  Instead of a lunch pail with a thermos of soup and a sandwich for $1.50, he gets takeout or picks up something at the drive thru, for $10.

In this sense, the dollar doesn't reach as far.  But that's not because of inflation or cheap bosses, its because we're choosing the more expensive option for our dollar.  Shopping carefully for the best deal on the best materials can make a cumulative difference that might surprise you.

When Joey and Jilly get ready for school, its time for a whole new outfit.  New backpack.  New supplies.  That's hundreds of dollars a year for each kid to hook them up for the new school year.  But back in the day, Joey got his older brother Jack's hand-me-downs and wore the same sneakers to school he had the year before.  Styles changed a bit slower back then, so the transition was less of an issue, plus people were less concerned about wearing hand-me-downs as well.

When it came time to eat, Ma Barker would make a meal from flour, eggs, meat, veggies out of the garden (or canned the fall before), and basic supplies -- baked "from scratch."  Now cooking at home is about buying a special blue ribbon box deal that is delivered to your door for $25+ a meal.  You assemble it like a Lego kit and put it on the counter to be eaten in front of the computer/TV/console game.  Or get takeout for even more.

All of this is small enough in and of its self, but adds up to thousands a year.  Combine that with things like vacations to Disneyland, two cars (and the insurance, gas, and maintenance for them), redecorating the house to match what Martha Stewart or that Instagram picture showed, and it really piles up.  Now you really do have to have two earners, and there's no way to get by with so many kids.

A CHANGE OF LIFESTYLE
And it goes beyond purchases.  When something goes wrong with your house or your car, when your clothes begin to wear out or tear, in the past, they'd be patched up or repaired at home.  Calling an expert is very expensive, so people learned to be experts to fix what they could.  Obviously not everything was possible to handle alone, but a surprising amount of stuff was.  And yeah, while you can fix a lot on your car, a lot more now needs special equipment and a computer.  But its still feasible to some degree.

Dad could fix pretty much anything, mom could sew up pretty much anything.  Mom and dad has first aid skills and could fix a bump or a scratch, a cut or a bruise with a kiss, some bandages, and zinc oxide or rubbing alcohol, not a trip to the doctor.  Its the can-do, self-fixing attitude that helped keep costs down.  Just keeping the house clean and kept up can save a lot of money in doctor bills.

Yes I know that popular culture and entertainment strongly discourages trying to do anything yourself and mocks any attempt by dad to fix something.  But it honestly is possible to learn and to do.  It used to be passed down generation to generation by parents and grandparents.  And family was always nearby to help with tips, too.

Family is a big part of this that's largely missing today.  Even if we're close in a relationship, we're often miles away.  I have family living in Kansas, California, Louisiana, all over the nation, even in Denmark.  We can get along great, but its not like they can drop by to watch the kids in an emergency.  Having close by family and friends, a support network like church, lodge, etc makes a big difference as well.

There's a book out called The Millionaire Next Door that examines the lifestyle of modest millionaires.  They have the cash, but don't spend it conspicuously.  They live a middle class lifestyle and have lots for emergencies or special things.  Living frugally gives them all the things they need, and leaves them the money for the extras they might want, on occasion.  Its a lifestyle choice, its a conscious decision to life lower than your means that can teach us quite a bit.

Does all this add up to being able to do what they used to?  Can you have a one-earner household and several kids today without slouching into poverty and loss?  You decide, I can't run the numbers for your house or your plans or your life.  What kind of house you can get for a certain amount of money varies pretty widely based on where you buy it, for example.

DOING WITHOUT TO HAVE MORE

But does this mean a poorer, emptier lifestyle?  Not necessarily.  Your kids can get by without playing Fortnite and you can make it without the latest Assassin's Creed.  You can take a vacation somewhere closer and less expensive.  You don't need that new dress, shoes, handbag, tie, set of kicks.  You can enjoy playing with toys that are repeatable and more creative such as Tinker Toys, clay, and Spirograph.  There's no "I beat that game" with these, they're open ended as your creativity.  Books are cheap used and can be passed around.  Its surprising how much entertainment is available for not very much cost at all.  Its like the old joke of getting the cat a toy and he loves the box it came in.

Its decisions like that which made it possible for parents to have one at home and more kids in the past; the choice to do with less in order to have more family.  Almost none of what we take for granted -- such as the laptop I'm typing on or whatever device you're reading this on -- we don't really need, its just really nice to have them.

And I'm not trying to argue we ought not have this stuff or that its wasteful.  I'm just presenting the case that we can do without if we need to, depending on what our priorities are.   And that's how they did it back then; they were frugal.  They did with less in order to gain a different more.

This is part of the Depression Era Survival Kit series.
Posted by Christopher R Taylor at 12:49 PM