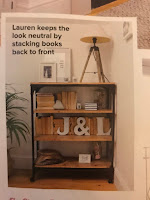 Recently a piece of news reached me through the Ace of Spades HQ blog and it made me chuckle.  It seems a Cleveland Ohio book store decided to highlight all the books by female authors (that they were aware of) by turning the books by men backward.  See, that way you can't see their titles or author, just pages.

They did it for a few weeks for "Women's History Month" according to the article at the Cleveland Scene, as a way of "silencing the male voice."  One publishing house raved:

This articulates the display’s effect admirably in terms of speaking and silence, but the visual effect—a clear picture of the gender disparity in the canon—is what’s stunning.

But are there so few female authors out there?  Are women in  disparity in publishing and literature?
As a published author with 8 books under my keyboard, I've got some experience in the publishing and literature business.  I have self-published them all, for a variety of reasons I've gone into elsewhere.  There was a time when I tried very hard to pitch my book to agents.  My theory was, self publish the first one and establish that I have readers and the ability to do it, and use that as a springboard into what at the time I thought was the "mainstream."

I noticed something while pouring through the lists of thousands of literary agents.  There was a consistent theme, a repeated fact that stood out very noticeably after a short time.

Literary agents are mostly women.  By a fairly large margin.  In fact, it became surprising to find a man who was an agent.  After a while it was kind of an amusing game, picking through the list like looking for a four leaf clover.  This is a pretty well established and known fact, one examined in this Quora article.

I was going to question whether there really are, since in general people tend to seriously overestimate the percentage of women in any mixed group, but then I checked the AAR membership list and saw that 37 of the first 50 names are indeed female.

The author claims this is some cruel trick by the publishing business to keep women down because of the "glass ceiling" of course. But if you examine publishing, you find the same phenomenon in place.  Most editors and people who work at publishing houses are also women.  That article about the bookstore above?  No men work at the shop.  In fact, women's voices are very well represented in publishing overall.

Publisher's Weekly ran an article about this phenomenon entitled Where The Boys Are Not.  They said comfortably that everybody knows that women dominate publishing:

Read more »
Posted by Christopher R Taylor at 7:55 AM No comments:

THE DEAL THAT WAS ART

Right now, special prosecutor Meuller wants to interview President Trump about Russian collusion and whatever else he can come up with, as part of an investigation.  So I have some suggestions (courtesy Sheryl Atkisson on Twitter) for how he should set up this interview.  Here are the rules:
These are the terms Trump should do the interview under.  What's that you say, that sounds unjust, rigged, even ridiculous?  There's no possibility of justice under these conditions?  That reads to you like some kind of ridiculous piece of fiction, that no prosecutor or law enforcement official would ever agree to?
That's what Comey set up for the Hillary Clinton email server and espionage law violations interview.  That's how the investigation was handled for her.  These exact, precise conditions are how her "interrogation" was agreed upon and carried out.
All that Sheryl did is say Trump should get the same deal as Hillary Clinton.
As long as there have been rich and powerful, the rich and powerful have gotten away with more than you or I could possibly consider.  The difference here is that the American system and philosophy of equality under law should be the last place on earth it should take place.
Yet what McCabe, for instance did in lying three separate times to federal officers and leaking materials to the press, we'd be in federal prison for doing.  He's still free with his pension.
And the more people come to see this happen and realize its taking place, the less likely people are to continue following and obeying the law.  If people can get away with rigging the system and breaking the law without consequence, that simply undermines any trust and faith in the law across the entire society.
You probably stopped at a stop sign or light today.  What makes people keep doing that, even when nobody is watching?  Honoring the law, trusting that its good for us, and obeying a system we agreed upon.  What happens when that honor, that obedience, and that trust is undermined far enough?
There cannot be anyone "too big" or "too important" to prosecute and punish. In fact, there's a good argument for the idea that the more powerful, public, and wealthy you are, the more the law should come down upon them for violating it. Doing so publicly and severely proves to the nation that there is no one above the law, and hence we all are treated fairly and equally. Failing to do so proves the opposite, and leads to chaos.