"One born every minute"

Remember Wonder Woman?  It was just last year.  It was the most life-affirming, important movie ever put out, a girl who beats up all the guys!  Wonder Woman proved girls can be heroes too!  Never before in the history of cinema had there been such an important film for girls to see.  Story after story of women leaving the theater glowing with joy over having finally seen someone like them being a hero!
Now its Black Panther.  This is such an important event in black history in America, the first ever film with a black hero and black cast, saving lives and being heroic.  Its making black children rejoice, changing lives, and affirming self value everywhere.  For once, finally, a black character is the star, and the big hero.

Except, as likely everyone reading this knows and is saying at least in their heads... that's all ridiculous.  There already have been many films made with strong female leads being heroic such as Supergirl, Aliens, Terminator, Ultraviolet, Foxy Brown, etc.  And there have been a host of black leading characters, even just from Marvel Comics, such as Blade.  Not to mention Hancock, Independence Day, Bad Boys, and a host of blaxploitation films from the 70s like Shaft.
What's going on here?  Why are we getting this hype, where are these stories of changed lives coming from?
Well, partly its Millennialitis, with people suffering from the ignorance of lack of memory of what came before.  Many people seem to think history started when they were around 13 years old, so what came before just never happened.  So those previous movies?  They don't count, I mean so ollld, who's even ever heard of Supergirl?
And partly its this effect.
Why go to a movie these days?  We have a screen the size of a kitchen table in our living room, with surround sound speakers that can rumble the floor.  I can grab any one of ten thousand films from online or our collection and watch them when I want, how I want, paused when I want, in the comfort of my own home without people talking, kicking my chair, throwing things, walking in front of the screen, and so on.  And it doesn't cost me $10+ a viewing.
Going to the movies is pretty unpopular these days, because there's really not much of a draw beyond "ooh, movie theater" nostalgia. So how do you get people to go see a movie?
You turn it into a cultural event.  You make it seem like its more than a movie, its a movement, it matters.  This is something addressing some great social injustice, some imbalance, some cultural lack.  This movie is something important your children should see.  This movie will make you feel better about yourself. 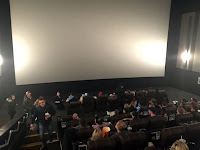 By turning these films into something more than just entertainment, movie studios are trying to get people to go see them in the theater rather than at home.  And how do you get them to go to the theater?  By making it a virtue signalling event.  Look at me, I'm seeing Black Panther.  Watch me stand in line, here's my selfie for Pinterest and Facebook.  Here's my Tweet from the seats.  I'm a good person.
And people who are swayed by press hype and entertainment -- a lot of America, and the world, really -- are easily pulled into this.  You can be convinced that this is important and meaningful to you, a historic first that you can feel special being a part of, making the world a better place being the change you want to see.
So it turns into an event.  People genuinely can feel as if its been profound and meaningful, life changing.  This is a real effect, I've seen it and felt it in person at events like a special camp or seminar.  Wow, this really made me better/happier/more self-actuated or what have you.  And for a time, it does.  But it doesn't last, because that sense is not based on truth, its based on emotion and thrill.
So you get the stories of women crying and watching Wonder Woman twice in a row, an talking about how important it was for their self esteem and understanding of life.  Because that's what they're sold and generally speaking, advertising still works.
Then after a while, they don't even remember Wonder Woman was a movie and they're back to exactly how they were before.  Lasting change doesn't come from a movie, it comes from change within you, not without.
How much longer they'll be able to pull this off, we'll see.  There are only a few more niche identity groups that can be pandered to before they start being so obscure and miniscule that it loses its cultural power.  The first wheelchair bound transgendered bisexual left hander doesn't quite have that cachet.
But ultimately, its cynical manipulation, to make money.  This isn't some important event.  Tearing down the berlin wall and freeing hundreds of millions from Communist tyranny: major event.  Movie about girl who CGI beats up bad guys: entertaining, but meaningless.

Thank you for a great read.

"Lasting change doesn't come from a movie, it comes from change within you, not without."