I also considered "Pan Spaghetti" as a name for this dish, because I'm not sure what it should be termed.  I came up with this dish one night because I noticed that my delicate innards couldn't handle marinara like they used to, and I wanted to find an alternative.
Here's what you'll need:
Its pretty simple as most good Italian themed cooking is.
GETTING STARTED
Cook up your usual batch of spaghetti in a pot while you prep and cook the other ingredients.  This should serve 3-5 people comfortably as a main dish.  While the water heats to boiling and you cook the spaghetti, chop up some veggies.  What kind?
Honestly it doesn't really matter much.  You can stay really authentic and focus on typical Italian vegetables such as peppers, onions, garlic, eggplant, mushrooms, zucchini, etc.  I even chop up some tomatoes or use stewed tomatoes, just not very many.  But really any kind work, even stuff like tomatillos, non-veggies such as turnips, and things like celery and carrots.  I know that sounds crazy but work with me here.
Chop up the vegetables fairly small, you don't want big chunks in the dish, but mixed all through. Chop em up half inch or so at the largest, so its well distributed in the final dish rather than standing out on their own.
GET COOKING
Fry up the veggies in butter, margarine or oil.  You want them cooked, but not reduced, just enough to be cooked through.  Remember when frying vegetables that they have different cooking rates: celery and turnips take longer, for instance.  Eggplant and onions take less time.  You want them all roughly the same level of cookage and texture.
Set the vegetables aside, and get the meat out.  Any meat you'd put in spaghetti normally works, I use hamburger.  Cook that almost all the way, but not quite done; chopped up so it blends well with the other ingredients.  You want the meat partly raw, so there's a little cooking to go.
As for proportions, I try to have about the same mass of vegetables and meat, so its half and half.
Mix the meat and veggies together.  Now here's a critical point: you want some kind of broth in the dish, so leaving at least some of the oil from the meat helps.  You might want to add in some butter or margarine to help with the liquid.  Stock would help as well, just not very much.  You're not making soup here, just a bit of sauce to help the final product not be dry.  Plus that helps get anything stuck to the bottom to lift off.
Spice the mixed meat and veggies, including some boullion or stock for flavor.  I use salt, garlic, and typical italian seasonings such as oregano, basil, marjoram, rosemary, parsley, etc.  If possible, use fresh herbs.  How much?  That's largely up to you, but for this first batch, use about half of your normal amount.  I've found that it takes more than you would think to get a good flavor, so don't skimp on the spices.
ASSEMBLY
Now drain the prepared spaghetti (don't be meticulous about draining it, some of the water left on it is fine) and dump it into the pan with the skillet you have the meat and veggies in.  Now add the rest of the spices you normally put in, the half you have reserved.  Remember to salt it pretty well; pasta absorbs salt like rice.
Now chop the spaghetti up with a spatula so its not huge long strands.  That works fine for some dishes, but this one serves and mixes better if not so stringy and dangly.  Mix the entire thing up, scooping the goodies from below up in to the spaghetti, blending it up as best you can. 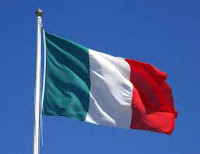 Grate or sprinkle some stinky cheese like romano and/or parmesan on top.  You can add some paprika to the top for a bit more color if you want.  Green, Red, White: an Italian Flag!
Serve in bowls, with more cheese available.  A green salad and some garlic bread goes well with this dish.  Give it a shot some time instead of the old standard alfredo or marinara tomato sauce.  Its a bit lighter and I think more flavorful.
*This is a part of the Real Men Cook series.
Posted by Christopher R Taylor at 11:32 AM