“If you tell the truth, you don't have to remember anything.”
― Mark Twain
Its been a while since I did one of these, but the examples keep rolling in and I keep taking notes to write about some time.  There are so many little things that people take for granted or presume now which are not the case, the older I get the more I wonder if anything I learned in my youth was completely accurate or true.
There is a lot of talk of "fake news" now, for example, and so many examples come out -- several a week -- of flat out falsehoods promoted by the news that has me wonder just how much utter trash we were told decades ago but nobody had a voice to counter.  Some are more benign than others, just mistakes.  Others are deliberate falsehoods meant to manipulate public opinion and policy.
So here's another wrap up of various things we generally believe to be so... that aren't.
WRIGHT BROTHERS 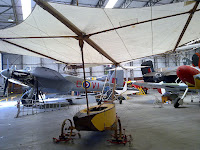 It is generally assumed that the Wright Brothers invented the first airplane, and flew it at Kitty Hawk on December 17, 1903 after several failed previous attempts.  And its true, they did fly a plane then.  It was a historic first; they flew the first manned, powered air plane on earth.
However, there were airplanes built and flown before that.  Decades earlier in the 1840s, a British engineer named George Cayley invented the first known and functional aircraft, a biplane glider which he had a teenaged boy test.  It was successfully tested in public in 1853 but was abandoned as a curiosity and definitely considered dangerous.
MARTIN LUTHER KING'S POLITICS
It is generally presumed these days that a black man is a Democrat in the USA, and in elections, Democrats can expect 80-90% of the black vote without even campaigning.  Obviously, MLK jr must have been a Democrat, right?
Well the truth is, nobody knows.  There's been no confirmation what party MLK belonged to although he did vote in Republican primary elections early in life (and almost all primary elections require you vote only for the party you belong to).  It is very likely that at least most of his life, King was a Republican, because the Democrats were still the party of southern bigotry and racism.  Democrats had been the party that defended and fought for slavery, set up Jim Crow laws, and were so associated with the Klan that they had open marches as late as the 1920s for Democrats.  Republicans were, after all, the party of Lincoln, and almost all blacks were Republicans up into the 1960s.  It is believed that late in his life, he changed parties to the Democrats, as the party began to shift its politics away from its past and to more progressivist, leftist ideals.  So he was probably both, but most of his life, Republican yet we do not really know.
All I know is, we shouldn't try to turn people into our mascots to present as some moral argument for our politics.
THE BIBLE AND RACISM

There are more than a few people who accuse Christianity and the Bible in general as being the source of much racism.  Some claim the Bible specifically supports racism, and prohibits interracial marriage. As Deuteronomy 7:3 says "You shall not intermarry with them, giving your daughters to their sons or taking their daughters for your sons."  There is also a line about being "unequally yoked" which some take as further admonition against "mixed race" marriages.  Is this true?
Short answer: no.  Long answer: the law in Deuteronomy has nothing to do with mixed races.  Israelites were surrounded by cousins and fellow Semites, of the same "race*" of humanity and the law was for the Hebrew people to not marry them, which has nothing to do with mixing other "races."  The purpose behind this law is expressed in the very next verse: "...for they would turn away your sons from following me, to serve other gods." The concern was not mixing "races" or genetics, but with blending with other cultures and destroying Hebrew faith to God and bringing in other worship.  And, as I've noted in the past in other essays: the Jewish Civil Law (which this is part of) was only for the nation of Israel, it is not binding on anyone except them at that time in that covenant.
In truth, the Bible makes it clear that Christians, because of the adoption into God's family, are all the same peoples without distinction by ethnic or social backgrounds, and all those divisions are wiped out.  "There is neither slave nor free, Jew nor Gentile."
Is slavery accepted in the Bible?  Yes, but that's a long topic (hint: nothing to do with race, doesn't mean what people think of slavery today, etc) for another post.
ISLAM IS THE BLACK MAN'S RELIGION
This is taught by the Nation of Islam and is pretty commonly handed around in prisons as fact.  Many blacks seem to view Islam as being more black and Christianity more white.  It is even generally portrayed in literature that slaves in Muslim areas were better treated than in Christian areas.
The sad fact is, slavery was horrible to everyone to one degree or another, and in Islam it was no more noble or "humanitarian" than anywhere else.  While the Koran does require masters to be humane to slaves, in practice that was not truly the case any more than how the Bible requires masters to be so with Christian slave owners.
Muslims took more than 25 million slaves from Africa (as opposed to around 11 million to the Americas), and even more died on the trip to the middle east than across the ocean to America.  The males were castrated to keep them from breeding, the females were, if attractive, put in harems.  There's a reason that the Middle East has so few blacks living in it despite the vast numbers of blacks enslaved and brought there.  Islam is an Arabic religion, and while it is willing to take in anyone, it is very Arab-centric both in culture and in dogma.  There is a lot of information out there about this topic, such as this video, interviewing African author x.  Slavery is still going on in Muslim-controlled areas, and the word for Sudanese people in Arabic is "Abeed" which is plural for Abd: "slave" because that was a place from which many Arabic peoples took slaves from.
THE FLAT EARTH 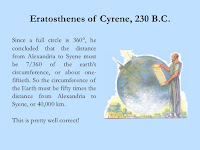 There are some who believe that Columbus proved the world was round with his trip.  It is even said that some think that Columbus was trying to prove the world round, by sailing around it to the Indies for the spice trade (they already had ships going east, and he wanted to go west).
This is easy to disprove: Columbus was not trying to prove anything about the shape of the world.  They already knew it was round, he was just trying to find a western route which would make him and the nation he found it for incredibly wealthy.  What they were not sure about was how big the world was.  Every sailor knew the world was round because they could not only see the rounded horizon of the ocean, but they could sail so far out that land would dip beneath the horizon, as if going over a rounded earth.
As early as the Phoenicans in 600 BC there were reports of how the stars began to shift down to the horizon the further south or north you went; something only possible on a sphere.  Pythagoras is believed to be the first philosopher to have stated the world had to be round, in the 500s BC.  The round shape of the earth was generally understood to be the case among educated men and those who experienced it at sea.  Columbus knew that as a famous sailor, and scholar.
What he apparently didn't know and should have was that in the 200s BC, Eratosthenes had very accurately measured the earth by taking two measurements of shadows from identical staves at the same time in two distant locations.  Eratosthenes was only off by about 100 miles!
HENRY FORD INVENTED THE CAR

This one is quick and easy: No.  A German did, named Karl Benz (yeah the Mercedes-Benz guy) came up with the first gasoline-powered internal combustion engine vehicle with four wheels in 1886.  Henry Ford was alive then, but not inventing cars.  The first wheeled self-propelled, drivable vehicle was made by Frenchman Nicolas-Joseph Cugnot in 1768; a steam tractor.  Even before that, A Flemish inventor and Jesuit missionary named Ferdinand Verbiest invented the first known wheeled, self-propelled device (steam, again) for the Chinese emperor in 1672, but it was a model and a toy, not driveable or possible to be ridden.
The first internal combustion engine was by a British inventor named Robert Street, in 1794, although a turbine version had been invented even earlier by fellow Brit John Barber (1791).  What Henry Ford did was take the concept of the production line and perfect it.  The Assembly line was already in use since Frenchman Marc Isambard Brunel and Brit Henry Maudslay put the first known one in practice in the Portsmouth Block Mills in 1801, but the first modern concept was by Ransom Olds in 1901 to make his latest Oldsmobile car.  Ford made greater use of it, made it more efficient, and made complete cars more rapidly and effectively than ever before with the system.
Well, that's enough for now.  Lots more in the hopper for later.
*I keep using "race" in quotes in this context because the term presumes that there's some difference in humanity between, say, Negroid and Mongloid, which is ridiculous.  Minor differences in appearance and slight genetic shifts do not make a different people.
*This is part of the Common Knowledge series: things we know that ain't so.
Posted by Christopher R Taylor at 12:54 PM