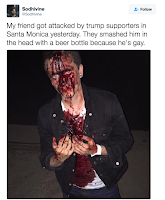 And we come to 2016, when things got really crazy.  More fake hate crimes are reported this year than any previous one, especially with an explosion of them after Donald Trump is elected president of the United States.
This is part of the Faux Hate series.
Posted by Christopher R Taylor at 7:00 AM No comments: 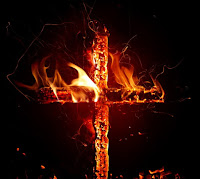 It was May in 1992 when Azalea Cooley said that vandals had spray-painted a swastika and "Burn, Nigger, Burn" on her house. Cooley, a black 40 year old former corrections officer won instant support from those living in the Portland, Oregon area. The mayor, the Police Bureau, the Urban League, the Anti-Bigotry Coalition, the Metropolitan Human Rights Commission all expressed their outrage and fury at the hate crime, and it was on the national news.
She claimed to get threatening letters. A black doll with a .38 bullet in its forehead was found on her porch. Swastikas painted on the property and finally a burning cross was found in her yard. Chris Woodgate writes in Willamette Week:


On Nov. 1, supporters held a rally to "Take a Stand Against Hate," which began with a spiritual "wombing," after which Azalea, in her wheelchair, led a throng of 500 protesters in a march across the Hawthorne Bridge to Pioneer Courthouse Square.

Those protesters had no idea that a secret police videotape from that very morning showed a woman with close-cropped hair step past her wheelchair, stick a wooden cross in a flower pot on her back porch, and set it alight.

When detectives confronted her with the evidence, she slashed her wrists and was hospitalized. A week later, she penned a handwritten note, confessing that the incidents had been staged, and admitting that she didn't have cancer or need a wheelchair.

As Woodgate puts it: black woman in a wheelchair? She was the perfect victim. Nobody even questioned her claims. And it was all lies, from start to finish. She was the first fake hate crime victim I remember hearing about, although there had been plenty invented to demonize the south in the past. As if the lynchings and church burnings weren't bad enough, people invented more to make the civil rights struggles more dramatic and horrible, I suppose.

I'm actually having a hard time remembering the last valid 'hate crime' even assuming the category has the slightest shred of credibility. It doesn't of course, its just a crime. Only Big Brother type tyrants would insist on making a crime worse based on the bigotry of the perpetrator. As if killing someone is not as bad because you failed to harbor some special bigotry.

The litany of fake hate crimes, of course, is long and pathetic. Here's a quick rundown of the faked hate crimes of our times in years past:

Read more »
Posted by Christopher R Taylor at 7:00 AM 4 comments: