Oh, were it mine with sacred Maro’s art
To wake to sympathy the feeling heart,
Then might I with unrivalled strains deplore
Th'impervious horrors of a leeward shore.
-William Mowatt (from The Ionian Mission) 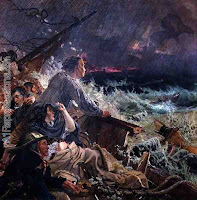 It may be hard to believe, but conservatives such as myself are big fans of immigration.  My grandfather immigrated here from Denmark, and all people living in the USA, including those designated "Native American" tribes, at one point immigrated to this land.
This nation built by immigration, however, is one built also by the rule of law and a love of freedom.  And this is where conservatives part ways with other groups, in a love of both of these things, in proper perspective, without ignoring either.
Illegal immigration ignores the rule of law in favor of freedom.  Closed borders ignores liberty to focus only upon the rule of law.  These two pressures can be viewed as negatives as well: imagine a ship sailing through a narrow channel, with jagged rocks and cliffs on either side, beneath the choppy seas are hidden reefs and shoals.
So, if you would, consider with me an analogy that helps understand this tension and perspective.
THE ANALOGY
Think of the nation as the great ship America, a sailing ship from the times of wooden ships and iron men.  It sails down a passage between jagged, lethal rocks on either side, manned by sailors of independence and personal ambition, working together to move ahead in this treacherous channel.
The main passage, through the center of these deadly cliffs, is freedom.  To stay on course toward liberty is to stay away from the ruinous shores on either side.  Shores which, if examined closely, can be found to meet beneath the hull of the ship, hidden deep by the waves.
On the port side is the evil of tyranny, in which liberty is destroyed.  On the starboard side is anarchy, in which law is abandoned.  Charting a course between these two evils that destroy civilization and happiness is a treacherous and dangerous job.
For centuries, this nation has been piloted through that narrow channel with a rudder called the Constitution and captained by leaders of integrity and wisdom.  To veer too close to one side or the other means the ship is wrecked, and as we pass through the years, we can see the skeletons of ships that veered one way or the other too far.  Nations destroyed by abandoning the rule of law or tyranny litter the passage of history.
To drift too far to port crushes the ship of our nation on tyranny, grinding its hull to pieces on laws that control us, rules that dominate us, and a culture that obliterates liberty, ambition, creativity, productivity, and even hope.  This tyranny can come to us in many forms, and always, without exception, is presented as being better for us, for our own good, and from well-meaning notions such as equality, safety, or morality.

Drifting too far to starboard eliminates law and order, creating only chaos and anarchy.  This demolishes the nation with rioting, violence, instability, crime, and disorder.  Anarchy need not be a wild man with a bomb, or a mob rising in fury.  It comes from leaders who ignore laws, from laws which the nation refuses to heed, and from exasperation, frustration, or rage at leaders who will not lead or listen.  Anarchy can come from a culture so comfortable with ignoring ethics that it mocks virtues and avoids order.
Anarchy is when every man does what is right in his own eyes, and every woman lives her own life without regard for anyone else. It comes to us in the name of equality and freedom, but in the end only gives us bondage when after all the violence and madness, the people cry for strong leadership to bring us safety and order -- leadership which is tyrannical.
For these two extremes are like a circle: tyranny often leads to revolution and anarchy, which leads to tyranny.  Anarchy leads to tyranny when people cry for strength and order.  The two evils are incestuous, connected with tentacles of corruption and injustice that reach far into the past and, if we are not careful, our future.  There is no safe port to either side.  Both lead only to rocks, destruction, and misery.
THE PROPER COURSE
Following the course between these two extremes leads ever onward to a future of liberty, prosperity, safety, comfort, ambition, achievement, equality and all the virtues of free civilization,  All of the benefits we are told lie on either side can be found down this course.
At times our ship will be tossed by the storms of war and the doldrums of economic difficulty, but these difficulties are far better than the rocky doom of either shore.  These troubles are short-lived and the benefits are great, if only we keep this course.
A wise captain will chart a course between jutting rocks and shoals from port or starboard that we must navigate between.  At times we will need to pilot the ship more to one side or the other, but always through the middle course, and never too close.
When faced with temporary difficulties, often voices call us like the siren to pull to one side or the other.  "Come to the side of tyranny, where you can give up the burdens of personal liberty" they cry; "steer toward the harbor of anarchy, where you can abandon the harsh demands of laws" they implore.  Often they do so out of ignorance, not knowing the terrors they call for.  Sometimes they do so out of malice, hoping to command the ship once the captain is undone.
THE MUTINOUS WHISPERS

When hardships or down times come sailing through the safe, true course, some aboard ship will grumble, hoping to mutiny and move us to one side or the other.  Their arguments may sound emotionally persuasive.  For those without the perspective of history and reason, these mutinous voices can be very compelling.
"Let us steer toward tyranny," they murmur below decks.  "There are those among us who do not have as much as others, surely this inequality is unfair.  If only there was some force to compel those who have more to give of what they have to those who do not have as much!  If only we could force equality of treatment and outcome, a strong leader, a controlling central council, a government that made sure no one felt bad, felt wrong, felt out of place."
"No, let us steer toward anarchy," another whispers in your ear.  "The chains of law and other people's standards are keeping you from having fun.  Imagine what you could do if only we abandoned these old, outdated morals.  Think of what you could have if you just stopped following their rules.  Are you not tired of this course driven by others?  Do you not wish to find your own way, without guidance or rules?"
And each of these would sound strong, if you could not but turn and look back to see where others have crashed, or looked to the side closer, to see the jagged rocks, the flash of bones, and the ribs of ruined ships that have gone before.  These arguments sound stronger when the economy slows or when war arises.  They can seem compelling in times of hardship, and only wise, sure leadership can move us through those epochs without disaster.
OUR PRESENT COURSE

Too easily we are moving to one side or the other, wildly veering about.  Wisdom and integrity are gone at the wheel.  We have no captains of virtue and honor.  We have no schoolmasters who teach us the evils of the past others have fallen prey to.  We have only voices of outrage and fury that they do not get their own way.
The entire concept of liberty as our dearest heirloom, bought at such a terrible price by those who have gone before, is abandoned.  Never do you hear politicians or pundits mention it any longer.  Our rudder is in tatters, broken and brought aboard only to bludgeon those we disagree with, not to guide us.
Our future inevitably, surely lies upon the rocks on either side -- and in the end, it matters not which, for they all lead to the same place.  Only through generations who move back into the proper course have we a future or hope as a nation.  Only by having children, teaching them well, and demonstrating the wisdom of this teaching in our lives can we hope to correct this course, repair the rudder, and replace our captains.
How close are we to the rocks?  I can hear the waves pounding in my ears.  I can see the spray of foam off the hull to the side.  I can see their slick, deadly surface dead ahead.  How much time do we have?  How much are we willing to do in order to right the ship?
I know what it took long ago when this nation was founded.
Posted by Christopher R Taylor at 7:13 AM

Came over from Ace's place after reading your lament of no traffic. Really good analogy in the above essay, and I will bookmark this site so I can find it again, but right now dinner beckons!