THE MORAL INFANCY OF GEORGE LUCAS

"Let me say here once and for all: [Jar Jar Binks] was the best damn character in any of the six movies. He was by far my favorite."
-George Lucas

So I was watching the Star Wars commentary track recently.  This is sometimes very interesting and informative, but sometimes very unfortunate.  For example: Die Hard track, pretty great.  James Bond tracks: terrific.  But I almost shot myself after listening to the endless stupidity and sermons on diversity on the Lord of the Rings commentary tracks, and it turns out that Kirsten Dunst is dumb as a bag of wet sand based on the Spider-Man commentary track.  I lost IQ points listening to her.
The technical guys are terrific.  They have lots of details of how they set up a shot, what they used to get an effect, how the sound was designed, costuming, on and on.  They never disappoint.  But the directors and actors are usually vapid and pompous at best, and it goes downhill from there.  I've lost tremendous amounts of admiration and respect for directors and actors from having to sit through their self congratulation and grossly overblown sense of significance and meaning.
Star Wars was no different.  I didn't have a very high opinion of George Lucas to begin with.  I mean, he's a great idea guy and he really pushed the boundaries of film making technology, but he's an idiot and a terrible director and writer.  The guy claims he had this huge overarching story worked out in the same breath as explaining that they had to make stuff up to fill in the movies because the original script and story idea for Star Wars was so limited.
Basically he wrote a story for Star Wars, then rewrites and better writers cleaned it up, so he used unused parts for concepts for the later movies.  He never had a huge long story in mind, just one Saturday Matinee-style space opera/fantasy.  Then he started thinking he was as cool and important as his fans said.
But what really struck me was how morally immature and lost Lucas is.  He's really an infant when it comes to issues of ethics and morality, almost completely unconsidered but absolutely certain.
ABSOLUTES
George Lucas went on at some length about the significance of costuming and coloration in the Return of the Jedi commentary.
He said that it was significant that the Empire wore black and white, because they were so absolutist, and the rebels all wore earth tones, because they were so organic.  Now putting aside the bright red Imperial guard in that film, and the various grays the pilots wore in the Empire, putting aside the pure white costume Leia wore in the first film, consider.
This statement on "organic" vs "absolute" was repeated overtly in the dialog of Revenge of the Sith with Obi Wan quipping "Only the Sith deal in absolutes"  OK, sure, that was its self a tautology: an absolute statement denying he belives in absolutes.  But the problems go deeper than that.
George Lucas would say that the Emperor is evil.  That destroying Alderaan was an evil act.  Absolutely.  He further would not agree with the idea that "organic" morality allows us to support slave trading like Jabba the Hut engaged in.

The same writer that made the stupid "absolutes" statement also had Yoda quip in a faux zen statement "there is no try.  There is only do and do not."  Again, an absolute statement, in direct contradiction to Anakin's childish line.
REDEMPTION
This moral confusion and lack of awareness continues through the entire commentary.  Lucas makes some grand statements about redemption and moral redemption in the Han Solo character arc where he goes from allegedly cold-hearted mercenary to heroic savior in A New Hope.  But there's no arc.  he just suddenly shows up Deus Ex Machina style when he's needed.  There is no explanation, no scene showing his transition, no moment of realization.  There's no story to it.  He just suddenly cares more about his friends than money and his own life.
Lucas goes on about this, comparing the Lando Calrissian character to Han Solo: both are self focused, both are money hungry cold men, then become better men through a story arc of redemption.  Yet again, Calrissian has no such story.  The deal he made to save his friends falls through with Darth Vader, so he takes action against the Empire.  There's no transition.  He doesn't change his mind.  If anything, he's just being consistent.
Lucas doesn't have any idea what it takes to depict morality or redemption, because he doesn't understand good and evil or what redemption really even means.
Consider his depiction of Anakin Skywalker's fall in the latest trilogy, episodes I-III.  There's no real story of how he goes evil.  The kid is just a lucky kid in the first movie, a petulant brat in the second, then an apparently insane individual who almost murders his own wife out of the fear that she'll get hurt, then joins with the man who caused her danger because... well its never really explained.  he just is, because that's how he ends up in Episode IV, as Darth Vader.
Lucas doesn't understand the whole idea of corruption beyond a term.  Anakin doesn't naturally and "organically" end up as Darth Vader.  He ends up that way not out of a character progression, but out of the necessity for the story to end that way.
THE CAVE
The most significant moral scene in the films is the Cave scene in the Swamps at Degobah.  Plato had his analogy of the cave trying to explain the depth of meaning and how only through enlightenment by someone else can a person understand more than what they see around them.  Lucas uses the cave to... well it depends on who you ask.
Lucas thought the cave scene was obvious.  Yoda tells Luke he won't need his weapons to go into the cave, but Luke isn't so sure.  Yoda looks sad.  Lucas makes a statement about how clearly this was him showing weakness, that his need of a gun showed how weak and small Luke was.
Lucas further went on to say how clearly it was if he took the gun into the cave, then he'd need to fight.  Obviously.  Then he met Vader, who showed that the violence in his heart was making him more like Vader, who he might turn into!
Except... nobody else got that out of the scene.  Not because its an implausible explanation, but because its not explained or even hinted at.  Yoda is disappointed, but why?  Because Luke doesn't trust him?  Because Luke doesn't rely on the force (the explanation most commonly given) instead?  Because Luke is too rash and won't stop and listen to instruction?  There's no way of knowing.
After all its a swamp full of snakes and water monsters, who knows what is in there?  Taking a tool belt including weapons along into an unknown cave on a wild alien planet doesn't strike me as particularly rash or foolish.  It seems completely rational, only the presumption that Yoda is right, a challenging one based on his bizarrely almost childish and annoying behavior when they first meet, makes you think Luke should obey him.
I get that Lucas had a short time to establish Yoda as a wise person, but since he spent a large portion of their scenes together establishing Yoda as whimsical and annoying, that doesn't come across well.  Which is again his poor writing skills on display. 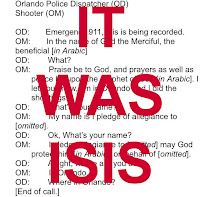 So we get NRA and Republicans and Christians all blamed.  Not because it makes any sense, but because those are the bad guys their moral system contains, so bad must go through the round hole, no matter how hard they have to pound on the star-shaped block.
This lack of moral maturity and awareness makes an informed, intelligent, mature, and proper response impossible.  They haven't the tools or understanding to react properly, so we get confusion, contradiction, anger, fear, and inconsistency.
Even more recently, the response to the UK leaving the EU has generated the same wild, flailing nonsense. It was all stupid white old racists!!!!  They were ignorant!!!  The very idea that someone might disagree out of an informed and reasoned response is not even a category; that cannot even be considered.  It doesn't exist as an option.  Its monsters or nothing.
OUT OF THIS
The only way to address this weakness is to face our own system and test it.  What do I believe, really, and why?  When I ask myself that question far back enough, what do I come to?  What is my ultimate foundation for thought?  Or do I even have one?
Can my ideas and system even face the real world, or do they require an idealized one where things all work out, somehow, despite human nature?  Have I constructed a fantasy world in my head where I can carry out my worldview or will it stand reality?  Have I confronted my beliefs with other people's and tried them out to see which is stronger or better?
Without doing this, all we have is our ego and traditions - old or new - that we insist upon without knowing.  At the very least, we need to read and learn from those who have challenged their ideas successfully in the past.
Yet in a world where the very idea of truth and reason are disregarded as sexist white European oppression, how can anyone even attempt a way out?  In short; they cannot, without rejecting this nonsense and the sources of it.
Perhaps, just perhaps, its worth considering that older people who are part of a long-established, trusted, an tried system of ethics might know what they are talking about as well.
FINAL THOUGHT
Incidentally a friend with Hollywood connections told me in fall of 1978 that Darth Vader was Luke's dad  I was in junior high at the time and thought he was crazy.  Lucas claimed nobody knew that, nobody, until it was finally revealed in Empire Strikes Back in 1980.  The guy was shown not even aware what Jar Jar Binks' name was in the filming of Phantom Menace, so I doubt he even remember what he ate for breakfast the day before.
Posted by Christopher R Taylor at 2:23 PM

Great analysis as always. As a companion to your takedown of Lucas is this masterpiece from Red Letter Media. It's goofy and funny at parts but really just rips into the whole prequel. https://youtu.be/FxKtZmQgxrI