"Those who torment us for our own good will torment us without end for they do so with the approval of their own conscience." 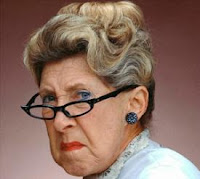 As some of you already know, I'm an avid gamer - the real kind, with paper and dice and figures, role playing - and write gaming supplements as well as fiction.  I've noticed a shift in attitudes very recently in gaming, though and its indicative of culture as well as my hobby.
In the exceptional Champions supplement Strike Force, Aaron Allston included various types of gamers that a GM should be aware of and work with in their campaign.  One of those types is the "rules rapist" who abuses every system and violates every intent of the game's rules to get an advantage.
Well, welcome to 2016, where using this term caused someone to be banned on popular gaming forum RPG.net.  Someone posted this:

Frankly, exploiting and abusing rules loopholes is a d*ck move and a player issue. To use the Strike Force category, those folks are Rules Rapists. Mind you, that doesn't absolve a system's designers from working as hard as they can to close loopholes, but when you have the nearly infinite complexity that (for example) HERO has, loopholes are essentially inevitable and HERO is pretty up front about the fact that it's everyone's responsibility to play nicely with each other.

and got a ban notice saying this:

Don't compare people who play differently from you to rapists. That's a group attack, and in very poor taste. I'm suspending you for three days. Plese [sic] don't post in this thread when you return.

Now, its obvious to any objective, sane reader that this person was not A) calling people rapists or B) claiming that anyone wanted to violently force sexual activity on an unwilling person.  Yet there we have it: instant ban for saying an unword.
Yet some are defending the ban, saying things like "If you don't get what's so awful about that phrase even after people here have tried to explain it to you, then there's nothing more I can say that'll likely convince you."
It seems to me, this is yet another example of the loss of freedom in our society, based on a worldview that tries to be all-inclusive and controlling.  It seems to me that its one thing to, on a case-by-case basis and out of compassion and politeness, to adjust your language around people if they are offended or hurt by what you are saying.  That's a personal reaction and choice.  It is another thing entirely to punish people for saying what might upset or offend other people.
This is just a gaming forum, but its happening around us all the time.  The most recent example is a professor at Marquette University who noted that refusing to even allow any debate or dissent on a topic is not exactly good for learning or freedom (the topic is homosexual behavior).  He was suspended without pay and is being told he must admit his guilt and apologize for the blog post, or be fired.
Or take the Student Senator at USC who is being punished for "violating Principles of Community" by daring to invite homosexual conservative Milo Yiannapolis to the campus to give a talk.
There's a big difference between reasonable expectation of politeness, disapproval of rudeness, and simply enforcing one's personal code of behavior one everyone else.  The truth is, just because you don't like something is not grounds for stopping other people from doing it.
This is something the left has long rightly condemned Christians for doing in culture (by outlawing homosexual activity, for example, or banning work on Sundays) but now engages in regularly and without the slightest hint of shame.
Again, this is the result of a competing religious worldview taking over and crushing all dissent or criticism of its tenets.  The new blasphemy is being enforced, under the guise of being kind or caring.  Just as someone would condemn saying the Lord's name in vain out of concern for their eternal soul, some words and phrases may not be uttered any longer out of concern for peoples' feelings.
Today, people don't say "hey, could you not do that" they run to a parent, a school authority, a moderator, a commissar, and demand that the person doing it be punished for doing so - or, worse, set up devices by which they won't have to run to someone else (witness what's happening with Twitter lately).
RELATED

That reference to the ban came up in a discussion of the health of Hero Games and how well it is doing as a company.  There are some people who are upset, even angry, that the company isn't spending enough time and money to advertise and make its self more popular.
I and some others have tried to point out that a hobby like gaming doesn't spread through advertising and corporate marketing, but through enthusiastic, passionate advocates.  People who love to play chess get converts and spread the joy through their love, not through Milton Bradley doing a multi-million dollar ad campaign during the Superbowl.  And gaming companies aren't a corporation with an office and lots of employees, they are usually one or two guys hiring lots of freelancers out of their home.
But the divide here is more significant than it seems.  Because its a split between those who demand that someone else give them what they want, and those who ask "what can I do to get what I want?"  One expects the company to solve their concerns, the other is trying to find ways to find solutions on their own.
And that's a pretty stark divide in our culture that goes far beyond gaming.  Those who want and take vs those who build and make. Now, obviously this can be overstated, but I thought that was pretty noteworthy when I considered it last night.
THE FUTURE OF CREATIVITY
Gaming as it now exists is pretty free and open.  Game companies create rules and design products that let a group do whatever they want, without restrictions or concern - how you use their product is none of their business.  People create characters with whatever personality, motivations, and behavior they want, and run about in an imaginary world with other players creating situations and interacting.
This kind of attitude toward gaming - demanding other people give me stuff without me having to do anything for it and protect me from anything that makes me uncomfortable - is incredibly corrosive to the creativity and freedom of the game.
I can easily foresee a time in which people require all involved to sign waivers and statements of declaration about what will and will not be permitted.  You cannot have these situations, these words, these types of characters. Sign this and then se can begin.
And its not just in role playing games.  Books, art, movies, any creative endeavor, anything creative period will suffer from this crushing totalitarianism in the guise of being nice.  If you're not free to express yourself, you cannot truly be creative.  And in the end, all you get is the kind of propagandistic art that tyrannies of the past have puked up: stirring in one sense, but without a soul or creative spark.
I'll finish with what C.S. Lewis said about oppression:

Of all tyrannies, a tyranny sincerely exercised for the good of its victims may be the most oppressive. It would be better to live under robber barons than under omnipotent moral busybodies. The robber baron's cruelty may sometimes sleep, his cupidity may at some point be satiated; but those who torment us for our own good will torment us without end for they do so with the approval of their own conscience.

Posted by Christopher R Taylor at 7:51 AM