There's a couple of stats flying around about mass shootings I want to examine here, since I have a platform for an extended analysis.
The first is from multiple right-leaning sources and it looks like this: 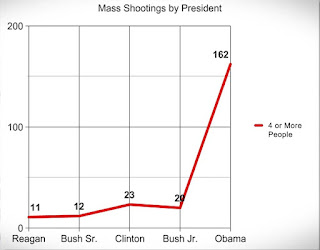 The other is from the website "shooting tracker" as reported on by NBC News.  It claims that in the year of 2015 so far, there have been 355 mass shootings (as defined by 4 or more victims).
Mother Jones has a useful chart of data from the FBI, showing what they consider mass killings going back as far as 1982.  It contradicts the two tables above as well, giving us a third source with statistics.
So which is true, and what's up with all this?  How do we know what is going on? This kind of thing is very frustrating to me and it happens all too often with stats and people throw them around like grenades to destroy their political or ideological opponents.
First off, the FBI defines "mass killings" as "a number of murders (four or more) occurring during the same incident, with no distinctive time period between the murders."  They are using a very specific definition here, which some people are playing a bit fast and loose with.
As Stephen Gutowski notes at the Free Beacon:

Though the FBI does not officially count mass shootings, it has studied “active shooter incidents” that involve “an individual actively engaged in killing or attempting to kill people in a confined and populated area.” In a report released last year, the FBI found over a thirteen year period, between 2000 and 2013, there were 160 “active shooter incidents.” Those incidents do not include gang-related shootings, but do include incidents where nobody was shot or killed.

So that's where the 160 number seems to have come from: incidents with someone with a gun in an area attempting to kill folks.  But that's over a 13 year period, which puts it back into the Bush administration. Those kind of events are, however on the rise: 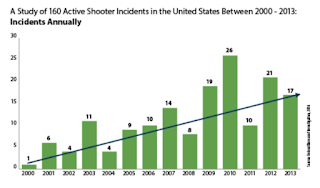 What about that 355 number being thrown around?  Well, the FBI does not consider almost any of those to be "mass killings" because they were extended over a long time period, involved family member shootings, were gang- or drug- related, or otherwise involved in other criminal activity.
See, there's a difference both criminally and logically between someone going around with the intent to just shoot a lot of people... and someone who's breaking and entering, then shoots the whole family or a drug deal that goes wrong and 5 people get killed.  Its even different from a serial killer who kills groups of people as part of a personal sickness.
The "mass killer" is someone who goes into an area just looking for people to murder, usually at random, for no other cause or purpose than to kill and/or cause terror.  And most of the killings that "Shooting Tracker" lists are not that kind. So the data is very skewed.  For their purposes, 4 people in a suicide pact would be on the list, because their only criteria is "4 or more people injured or killed with a gun."
So what's the real number of mass killings, according to the FBI?
Since President Obama took office in 2009, there have been 426 casualties, 224 of them lethal in 28 mass killings. In the previous 8 years, there were just 15 shootings, with 121 lethalities and 211 total casualties.
Of those, five were Muslim terrorist strikes, including the Boston Marathon bombing and yesterday's killings.  During the Bush administration four happened, including 9/11 and the DC Sniper.
So not 355, not even 160.  But a lot, and way too many.  This doesn't include the numbers fewer than 4, of which there were many more Muslim attacks and attempts at attacks in the USA.
But no matter which one is the best information or how you spin it... this kind of shooting is absolutely on the rise and so are terrorist attacks.  And the change is because of a shift in attitude by the leaders and top officials in law enforcement - President, attorney general, etc - as well as the press.  Their actions and rhetoric are encouraging lawless behavior and getting what they encourage.
It is painfully obvious that what the current leadership in America are doing is not working, and is making matters worse.  Its time for a change, not more of the same. Its time for a different approach.
Posted by Christopher R Taylor at 11:16 AM