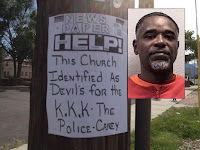 As part of my continuing coverage of faked hate crimes, we look at just the year 2015 this time.  For 2015, the main theme of fake hate crimes were anti-Muslim attacks which turned out to often be by Muslims.  There were even more than the previous year, as the craziness ramped up.


This is part of the Faux Hate series.
Posted by Christopher R Taylor at 7:00 AM