"What a stupid time to be alive" 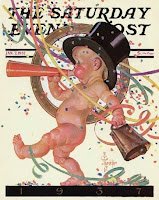 I posted a lot less in 2015 than previous years, but still had a few major popular articles.
The most popular WATN bit was "A Mad World Run By Fools" in which I tried to lay out what its like to be a conservative in the world today, for those who think we're just over reacting or hysterical.  That article hit home for a lot of people and to date is the one that got the most hits, the most shares, and the most links of anything I've ever written on this blog.  Thousands of people came by a day for almost a week to read the article.  It got shared a lot on Facebook too, judging by where many people came from to read it.
Another popular piece was "Just Because," wherein I tried to show how the left is honestly trying to replace the old structures and ethical foundations that they destroyed, but have nothing to work with.  In an ideology that changes daily, even hourly, and is infinitely "progressive" you cannot truly build a foundation or structure at all.
"Don't Stand So Close To Me" was very popular but I feel I can only take a small part of the credit for that.  The rest has to be given to Dave Chapelle's brilliant examination of the whore's costume and what it means.  Modesty does matter.
The very first piece I wrote for 2015 was "The Black Ban" that examined the way black culture and racism is used and understood in America, not by blacks but by whites.  You can insult someone by saying they are "very white" and compliment someone by saying how black they are, but we're still told white people are oppressive rulers and blacks are oppressed helpless, crushed, and marginalized.
Next year looks to be even more troubling and upsetting than this one, but remember.  It is too easy to be dragged down by politics and fears and grit your teeth in frustration wanting to know what you can do to fix things.  Sometimes all you can do is live your life properly, raise your children wisely, and pray to God, because He's in charge, not us, not politicians, and not the popular culture.
I'll keep posting what comes to me and I think should be heard, and I hope you all keep visiting and reading.
Posted by Christopher R Taylor at 8:40 AM

Please keep posting - your insights are unique and thought provoking. It makes for a better world, if not in general, surely on my personal level.