"There is no true Scotsman"

Several times on this blog in the past I've pointed out that President Barack Husein Obama is not a Christian despite claiming to be so.  I do so because his claim to be Christian is absolutely not backed up with any actual Christian beliefs or doctrine.  In fact, he defines sin, God, truth, and basically every other fundamental Christian doctrine differently than Christianity does.  I doubt he has any religion at all, other than Obamaism, where he is the supreme being.
However, on the whole, I do not like to pontificate on other people's religion.  KKK members claim to be Chistian, and while their racist, idiotic behavior defies that, they may otherwise be quite faithful.  The Westboro Baptist members claim to be Christian, and perhaps at least some of them are - I do not know their hearts or the rest of their beliefs or actions.  Only God does.  In the end, if someone claims to be of a faith, and their beliefs and statements of faith do not conflict with their confession, I think we have to take them at their word.
Which brings us to Islam, wherein the President of the United States and many perhaps (more on this later) well-meaning leftists insist that terrorists cannot be Muslim.  Every time a Muslim does something horrific, they instantly declare this to not be terrorism, or if it is, not really the act of a Muslim, no matter what they say.  Yes, technically they may have been screaming "Allahu Akbar" and be a regular Mosque attendee who owns and reveres a Koran, but they're a false Muslim.  That's the line, always.
And to me it seems incredibly arrogant and condescending.  IS -- Islamic States -- has ISLAMIC in the name, yet somehow they're not real Muslims, according to the left.  Recently a fellow named Faisal Saeed Al Mutar wrote about this phenomenon and I want to quote the facebook post in its entirety:

It must be incredibly frustrating as an Islamic terrorist not to have your views and motives taken seriously by the societies you terrorize, even after you have explicitly and repeatedly stated them. Even worse, those on the regressive left, in their endless capacity for masochism and self-loathing, have attempted to shift blame inwardly on themselves, denying the terrorists even the satisfaction of claiming responsibility.
It's like a bad Monty Python sketch:

"We did this because our holy texts exhort us to to do it."
"No you didn't."
"Wait, what? Yes we did..."
"No, this has nothing to do with religion. You guys are just using religion as a front for social and geopolitical reasons."
"WHAT!? Did you even read our official statement? We give explicit Quranic justification. This is jihad, a holy crusade against pagans, blasphemers, and disbelievers."
"No, this is definitely not a Muslim thing. You guys are not true Muslims, and you defame a great religion by saying so."
"Huh!? Who are you to tell us we're not true Muslims!? Islam is literally at the core of everything we do, and we have implemented the truest most literal and honest interpretation of its founding texts. It is our very reason for being."
"Nope. We created you. We installed a social and economic system that alienates and disenfranchises you, and that's why you did this. We're sorry."
"What? Why are you apologizing? We just slaughtered you mercilessly in the streets. We targeted unwitting civilians - disenfranchisement doesn't even enter into it!"
"Listen, it's our fault. We don't blame you for feeling unwelcome and lashing out."
"Seriously, stop taking credit for this! We worked really hard to pull this off, and we're not going to let you take it away from us."
"No, we nourished your extremism. We accept full blame."

"OMG, how many people do we have to kill around here to finally get our message across?"

Its insulting and idiotic.  They claim some Muslim clerics condemn these actions and people, but then some cheer, support, and encourage it (more than the few that condemn it, from what I've seen).  They claim that the Koran condemns this kind of behavior, and it does.  But the Koran also supports and encourages it.
And what's more, the Hadith and the later teachings of Muslim scholars support and encourage these evil acts.  And unlike Protestant Christianity, Islam teaches that the Koran is not the exclusive and complete word of God, but that later teachings add to and expand Islam.  Those statements by Sharia Court clerics aren't just legal statements, they become part of official Muslim doctrine, they are Islamic religion now. 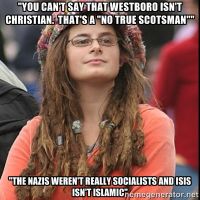 So why do the left insist on this idiotic, vapid, and unsupportable nonsense?  Why repeat this lie?  Well, I believe there's a variety of reasons
First, they are more afraid and concerned about backlash and reprisals against Muslims than they are the actual terrorist attacks.  They're so afraid that stupid knuckle-dragging right wingers are going to start lynching Muslims that they feel the need to make this defenseless lie about their true state of faith.
Second, they are afraid of being racist, or seeming racist, which in their somewhat lunatic mindset, opposing Islam becomes.  For them, Islam is another race, or at least represents people of another race, so that opposition to it becomes racism.  And that's the ultimate sin to a leftist, who wants to be seen as the good guy in the room as opposed to all of you people.
Third, they are worried that admitting and condemning Muslim radicalism means support for war, and they are using the Drum Principle in which you recognize evil but do not condemn it because that might be used for support of something you don't like.  So they condemn terrorism but make sure its in a way that can't be used to take any actual tangible action (other than something absurd like gun control - given that Paris has heavy gun control and all the weapons used were already illegal).
Fourth, they tend to view Muslims as an oppressed "other" minority, who only do bad things because they are cruelly abused by the oppressor (white male Europeans), and must be defended against this cruelty.  By declaring the bad guys un-Muslim, then they are not part of the group that must be protected.
Fifth, they're playing for the team.  They step back, see who is cheering for what, and go with that.  The right condemns Muslim radicalism?  Well then that must be incorrect, because everything the other team does and says is necessarily wrong.
Sixth, the left feels that if they deny bad guys are Muslim, they are supporting who they view as "moderate" Muslims that claim the same thing, and think this lends legitimacy to the claim as well as moral support and encouragement to the good guys.
Finally, the left relies on Muslim immigration for votes and support for their plans to undermine and destroy capitalism, the given culture, traditions, and past of a nation, to clear the way for their golden utopian schemes.  So they need to pander to Muslims and protect them for the votes.
So you get this stupid, insane line about Muslims not being actual Muslims.  After all, they're only brown people and we on the left know better than they do what they think.
*UPDATE: A brief video showing how idiotically silly all this is:

Posted by Christopher R Taylor at 10:29 AM