There's a new sort of protest in town, and its name is "Crybullying."  The first place I saw that name was in The Spectator, where they described its use across America:

This is the age of the Cry-Bully, a hideous hybrid of victim and victor, weeper and walloper. They are everywhere, these duplicit Pushmi-Pullyus of the personal and the political, from Celebrity Big Brother to the frontline of Islamism. Jeremy Clarkson is a prime cry bully, punching a producer and then whining in The Sunday Times about ‘losing my baby’ (The baby being Top Gear). Perez Hilton, recently of the CBB house, is a good example too, screaming abuse at his wretched room-mates until they snapped and hit back, at which point he would dissolve in floods of tears and flee to the Diary Room to claim that he felt ‘unsafe’. Stephen Fry is one, forever banging on about his own mental fragility yet mocking Stephen Hawking’s voice at a recent awards ceremony.
Crymobs will “safebait” by yelling and pushing and then whining that the people they’re shoving make them feel unsafe. One crybully safebaiting tactic is to yell loudly, forcing anyone talking back to them to raise their voice. That’s when other crybullies begin shouting, “Don’t yell at her.” Crybullies will push into you and cry that you’re making them feel unsafe. They will hit you and when you raise your hands in self-defense, they will scream that you’re putting your hands on them.

The article goes on about Social Media calling for enemies to be attacked and their homes publicized, then whining when people respond negatively, or Muslims hacking heads off then whining about Islamophobia.
But there is a new and particularly virulent sort displayed by the modern college student protester, as shown in several very recent incidents.  One such example is Dartmouth, where "Black Lives Matter" activists went into athe Baker-Berry Library and began verbally assaulting, mocking, and swearing at white students trying to study there.

What supposedly had been a protest about changing a display in the student center turned into an all out assault, complete with racism. 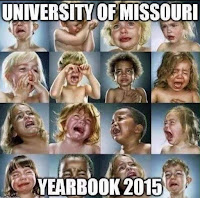 Another example is University of Missouri ("Mizzou"), where students shoved, hit, and yelled at astudent journalist trying to document their "protest" then cried "don't yell at me" when he raised his voice to be heard -- almost exactly what Julie Burchill noted in the Spectator piece above.  They were supposedly there to protest, but turned violent and angry at someone like mobs tend to do.
Or at University of Texas-Austin where "protesters" disrupted an Israeli Studies event, shouting slogans including "long live the intafada" (in which palestinans are called to stab and kill Israelis).  The university took swift action to... apologize to the ones who disrupted the event and start an investigation into civil rights violations by the filthy Joo lovers Israeli Studies students and profs.
Crybullies are not protesting anything so much as just trying to intimidate and attack people they disagree with and do not like.  They try to frame it in terms of safe spaces and being oppressed, but in the end, all this is about is silencing and destroying what you do not like.  Or, as Mizzou vice president of the Missouri Students Association, Brenda Smith-Lezama puts it "I personally am tired of hearing that First Amendment rights protect students when they are creating a hostile and unsafe learning environment for myself and for other students here."
The rash of faux hate crimes wherein people stage a "hate crime" and then call attention to it, demanding action taken against their enemies, is reaching epidemic state.  Its a useful tool in a college environment where the administration is as leftist and radical as the students and always willing to take strong actions against the politically incorrect, sometimes in the face of all evidence and facts.
Instead of standing against some perceived injustice, students are now starting to do injustice, against their enemies, then cry foul when someone disagrees or protests.  The entire dynamic has shifted from Martin Luther King-era peaceful protests to late 60's violent riots.  As I wrote about in the Common Knowledge series, the Kent State shootings were in response to over a week of arson, violence, destruction of property, and chaos on campus, spilling into town.  There's even audio evidence of someone shooting at the national guardsmen before they open fire.

Apparently knowing that coverage of these antics will harm their cause, these crybullies try to ban journalists from being present at their events, such as at Mizzou above and Loyola University.  "Black Lives Matter" activists at Mizzou later decided that only journalists who'd report on them supportively and positively should be allowed.
Its the same approach as people who actively try to destroy businesses that will now bow to their demands and cry victimhood in the process.  Its the kind of madness in which a person claims their civil rights are being violated because a business they want to destroy won't sell them what they insist upon.
But increasingly, the radical left is moving from peaceful hippie types to violent, angry types who want to destroy and break rather than create and unite.  They claim racism, but the only racism on display is by them.  They claim oppression, but they're the only ones that demonstrate it.  And in the end, they are everything they supposedly stand against - every tactic, every evil - in the name of being better and more right than their opponents.
Because, after all, the ends justify the means, right?
Posted by Christopher R Taylor at 11:12 AM