"You shouldn’t silence them by saying, ‘You can’t come because I’m too sensitive to hear what you have to say.’ That’s not the way we learn either.”
-President Barack Hussein Obama 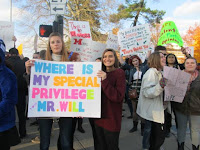 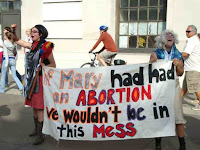 This is true on all sides.  Christians presuming non-Christians are corrupt, sinful, and immoral.  Atheists presuming Christians are retarded inbred losers.  Conservatives thinking all leftists are America-hating communist subversives who want to take away their guns while requiring them to be homosexual.  Leftists thinking Conservatives are all anti science Bible-worshiping morons who want to oppress women and minorities while taking away all their rights.
And it all boils down to one thing:
I don't know this group so they must be worse than me in every way.
Deliberately isolating yourself from people you disagree with, deliberately blocking off all difference of opinion will tend to result in you becoming not just ignorant of your political and ideological foes and rivals, but human nature will tend to lead to you dehumanizing them as well.  We will go from "they're wrong" to "they're bad people" in a hurry.  And worse, we'll tend to assume  the worst could be and even must be true about these bad people.
Read an article that confirms your biases against some group and We're much less likely to scrutinize or doubt it than one that contradicts it.  Our first reaction will tend to be "that's probaby true" rather than "that doesn't sound likely."  And why check if your enemy is as bad as you thought or not?  Its more fun to scream at the picture of Emmanuel Goldstein with all your friends.
This has always been a tendency of people, but modern technology makes it so easy.  Its very simple to find only friends and online connections that think like you.  Its easy to block off and avoid different ideas.  The process is self-rewarding and self-enforcing.  Kick your enemy in the teeth and your side yells "yay!" while the opposition hits the block and unfriend button.  Sooner or later, everyone agrees with you!
With the modern division becoming stronger and stronger, its easy to find "conservative" or "progressive" versions of all kinds of things.  Watch Boondocks and Daily Show, not Fox News!  Listen to Rush Limbaugh, not Stephen Colbert!  Fund your project with this site, not that one.  Get your fried chicken at this fast food joint, not that one!
So we are able to isolate ourselves faster and easier than ever.  We learn a list of people that are bad (always a moving target, but easy to list from the top of yourself) and good (again variable but easy to think of) and avoid the one while leaning toward the other.  Bad actor, good actor.  Bad singer, good singer.  We define morality and wisdom in terms of what appeals to or agrees with our ideology, rather than seeking and learning from a variety of sources.
And the result is that our culture is becoming increasingly divided and separate.  We're a people who are less and less united and connected.  There is no longer a common, shared US culture at large, its becoming two almost warring cultures.  And a nation cannot continue this way.
The place that this should least happen and be most avoided is the university and college campus, but that is the very location that this movement is being led from.  Absolutely no conservative ideas, not from faculty, not from students, not from guests, not from materials or curriculum ever.  That's the slogan of far too many of these bodies.
And they're producing students who agree with and embrace this concept far too readily.  Bombarded constantly with one viewpoint from peers, entertainment, teachers, and culture at large, young people are utterly unable and unprepared to even muster a defense in all but exceptionally rare cases.
And whereas once, when you left college, the real world would tend to shape, temper, and even reverse that trend, today it is too easy to just keep things going as they are comfortable to young people.  So you don't get the tendency of young people to become less radicalized and leftist as they enter the workplace, particularly as "triggering" and "microagression" fears move into the working world.
What's needed is a meeting of minds, not separation.  What's needed is an openness to other ideas and influences, not a hate-packed condemnation and shunning of it.  Because it turns out almost all people have pretty good reasons and bases for what they think and believe.  Its too easy to presume people are idiots for disagreeing with you, but that's not very often the case.  Its too easy to assign evil to the motives of those who think differently but that's almost never what happens.
And until we move away from this tendency - one I feel strongly and surrender to, far too often - to isolate ourselves from different ideas, things are only going to get more heated, more divided, and more angry.
If history has taught us anything, its that this never ends in amity and friendship, but almost always in blood and misery.
Posted by Christopher R Taylor at 11:06 AM