WHY I DON'T GIVE A DAMN ANY MORE


Syria has been torn by civil war and invading forces trying to take over for years now.  When it first started up, the USA and other countries had an opportunity to lean on the nation and help keep things under control.  NATO and the UN have been somewhat successful in the past in controlling violence in these situations, and even calming a country down.
But despite several "red lines" drawn by President Obama, and a hapless group of ill-trained rebels sent in by the United States to be slaughtered, nothing was done for good or ill.  So the situation has gotten increasingly worse as IS sends troops into Syria to take it over.
Now, the place has become such a disaster that thousands of refugees are fleeing the country, accompanied by at least some thousands of radical Muslim invaders posing as refugees.  Their travel patterns are conspicuously non-refugee: 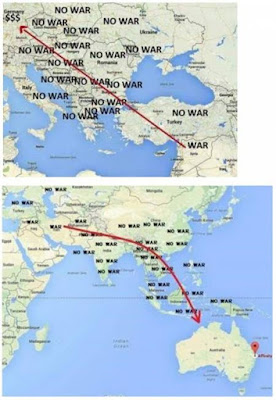 These "refugees" among the real ones are heading for places they can get welfare money and change the culture to be Muslim - and they aren't very grateful or nice people, either. Still, Syria is in terrible shape, and I don't blame people for wanting to get out.  As rebels hide among the population, the Asad government - never one to let morality or human decency get in the way - is bombing the population where they figure rebels might be.
And calls for the USA to do something are rising.  Presidential Candidate Marco Rubio says we should let Syrian refugees into America.  And Michael Totten pointed out in an article about IS and Palmyra recently:

But I’ll never forget what he said next.

Six months later, the United States invaded Afghanistan after the most devastating attack on American soil in history.

I was right. But so was he.

The Taliban’s cultural genocide was just a prelude to what would come later.

The danger is real that an evil like that in a region like that will reach out and cause us trouble later.  And certainly the argument of "deal with them abroad so we don't have to at home" is compelling.  So is the argument that we have a certain responsibility as a world leader, and as a rich, powerful nation.
But I say no.
In the past, certainly I would have agreed.  To this day I understand why invading Iraq was the right move at the right time - something history will probably prove.  I think invading Afghanistan to destroy the Taliban was the right thing to do.  The fact that later on, treasonous scum undermined our efforts in the west and a presidential successor that is incompetent and hapless in foreign policy has virtually erased all the US gained in those nations doesn't make what we did wrong or bad.
No, the reason I reject any US interference or involvement anywhere in any situation around the world has nothing to do with failure in Iraq or worries about "nation building" that ignorant people throw around*.
My position is quite simple.  When Saddam Hussein was building a gigantic army, committing genocide on his own people, committing ghastly acts of horrific human rights violations, jailing children to control parents, making corrupt deals with the UN to buy forbidden goods, violating the cease fire agreement in 91 dozens of times, and maintaining a stockpile of WMDs he was forbidden to have, the world cried out "why doesn't someone do something??
In fact every time there's a horrific dictator doing evil things to his people and neighbors, the world cries for action, for leadership, and for the US to stand up and take action.  And I agreed, leaders lead.  It should be done.  Justice cries out for punishment.
So the US took action.  Leading a coalition from every continent on earth save Antarctica, from over 4 dozen nations and following up on several UN resolutions with congressional approval, the United States under President Bush moved in and demolished Saddam Hussein's military forces, obliterated his evil government, and put him on trial for his crimes against humanity and his own people.

And the world... turned on the US.  It called President Bush a warmongering monster.  It declared the action illegal and horrible, called US soldiers baby killing murderers.  The news was full every day with hordes of people protesting and crying for the US to get out of Iraq.  Protesters and politicians called for war crimes trials against the US presidential administration.  To this day, merely supporting the Iraq war in public gets you called names.

The world called for action, and when it got what it wanted, turned on the people who took action and demonized them.
Well enough.  If that's what you think, then you can eat it.  Enjoy the world you wanted.  This is what you get when you reject attempts to do right, bring justice, and help people.  You claim you wanted it to end, but when it ended, you attacked the very people who did it.

So this is what you get.  Enjoy your new world without US "interference" and "imperialism" you pathetic wretches.  No more spending American blood and American dollars to help anyone, anywhere, for any reason, at any time, unless it has direct, tangible, and specific US interest and people.  No more invasions, kinetic actions, air strikes, UN involvement, NATO assistance.  Nothing. 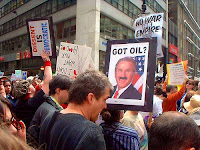 I think the USA should yank its world bases out of nations that treat us with contempt and hatred. Leave only a few scattered bases in strategic locations, and pull all those US dollars and spenders out of the region.  No more contracts, no more soldiers buying goods, no more taxes for land, nothing.  This is what you wanted, its what you get.

I don't want one more young man to bleed or die for ungrateful scum that cannot seem to understand what it takes to bring liberty and safety to the world.  No more, for you.  You had your chance, and you blew it.  You showed contempt and spat on us for doing what you asked.  Why should we do it again?  We spent ourselves into a crater of debt for you, taking nothing from Iraq when we could easily have taken it all.  All we asked for is a little support and you gave us hate. 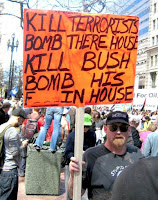 Never again, no matter how awful things get.  Invade us, and you'll catch sheer hell.  But leave us alone and we'll leave you alone.
Do I care about what is happening?  Yes.  I want things to be better. I pray for peace.  I think individual groups trying to bring help, food, and medical care to these areas are doing well.  Russia seems to think it should handle this stuff now, and good luck to them.  They can spend their money and die there for people that will hate them for it and a world that will spit on them.
*Nation building is when you move into an area to fix it, ala Somalia and Yugoslavia.  Invading a nation to destroy a terrorist supporting, funding, and harboring dictator hostile to America then rebuilding it is completely different.
Posted by Christopher R Taylor at 8:54 AM

I'd prefer it if we let Europe commit suicide without joining in with them.

Well said and I totally agree. All we had to do was maintain about 30k troops in Iraq and all this nonsense would have been prevented. It would have been relatively low cost and been a monstrous deterrent to those who are now creating problems thousands of miles away.

Neither Iraq nor Afghanistan were mistakes - with information available at the time or in hindsight.