"Americans want Congress to end the lawlessness, but this bill would have us surrender to it"
-Jeff Sessions (R-Alabama) 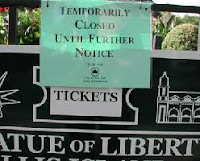 The United States, like a lot of western nations, is facing a bit of a crisis in terms of immigration.
Having ignored immigration laws and encouraged people to flood across the border from poorer nations for decades, the US is dealing with the weight of these new people.
These new immigrants have often ended up on welfare, taking advantage of the generosity of the government which every year extends more and more benefits to not only non-citizens, but people who have crossed the border in violation of immigration law. The resulting expense is burying the nation as a whole and many individual states in debt.  With an estimated 11 million (the actual number is likely as much as 20) illegal immigrants in the country the cost has gotten out of control.
Further, while most of these immigrants are good people who work hard, at the very least every single one of them has come to the country by breaking the law, and some break the law a lot. Every few weeks another ghastly murder, rape, or other severe crime takes place by an illegal immigrant, since not everyone who crossed the border is a nice person.
Illegal Immigrants make up about 25% of the prison population in the United States, according to the Government Accounting Office.  At American Thinker, Randall Hoven points out illegals are more criminal than the average US citizen, that they don't commit minor crimes, either:

The Government Accountability Office has data that show otherwise. Here is the leading sentence from a 2011 GAO report (GAO-11-187, Criminal Alien Statistics, March 2011).

(SCAAP is the State Criminal Alien Assistance Program and in this context means “illegal aliens” – a GAO term meaning “Noncitizens whom ICE verified were [or whom states and local jurisdictions believe to be] illegally in the United States at the time of incarceration”.)

Of course getting hard numbers on illegals in general is difficult since by their legal status makes them unwilling to admit it to anyone who seems remotely official.
It is true, however, that the greatest bulk of illegals in the USA are there to work, build a better life, and make a future in the USA.  While it is true that immigrant families in the US sent over $20,000,000,000 to Mexico alone last year, they also are a positive for the US economy.  Much of the work done is "off the books" in the form of work for cash, which means no taxes paid or contributions to Social Security, for example, but not all of it.
And immigration has always been a delight for America, not a frustration.  There were no indigenous people in the American continents originally, all who live here came from other lands, even back long ago when the first Indio-Asian groups arrived.  They bring new ideas, cultural flavor, food, music, dance, poetry, art, language, and much more to blend into the American melting pot.  While some are slower to assimilate, eventually after a few generations, they become American and the nation as a whole is stronger for it.
THE REASON
However, immigration law as it stands now is frankly terrible.  Tales of how awful, slow, expensive, and ridiculous it is to enter the United States legally make coming into the country illegally seem frankly attractive and logical.  It takes so long and is so expensive that the system clearly is a mess and needs streamlining, which I've written about in the past. 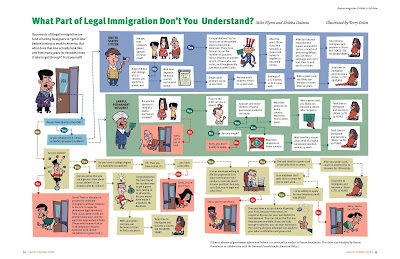 But the biggest problem with immigration in the USA is that the nation has for decades basically ignored its own immigration laws, and over the last decade or so has been even more determined to do so.  Recently, President Obama deliberately flew thousands of families into the country in the name of sanctuary for refugees, and called them children - but of course, their parents, uncles, grandparents, and so on all came along.
So people are talking about walls and boxcars full of families driven out of the country and jailing people and so on.  Deportations, tougher laws, towers and drones patrolling the border, on and on.  But the thing is, simply enforcing the law and cracking down on businesses that hire cheap illegal labor for low pay and no benefits would actually work to pressure immigrants to self deport.  Take away the jobs and the welfare goodies, and people will go on their own.
What about the people who've been here for years and are working in the society, people who are settled in?  I have a suggestion, based on existing law that is long-established in our legal system, to be implemented once all the other things have been done (enforcing law, cracking down on businesses, fixing immigration law, etc).
STATUE OF LIMITATIONS
When you commit any non-capitol crime such as theft, there is a "statute of limitations" or similar concept which cuts off the point at which someone may be held accountable for their crime.  The principle behind this is that after a certain point testimony and evidence is so unreliable or unavailable that a fair trial cannot be held.
So basically: commit most crimes, hold out long enough, and you walk.  This may seem unjust, but it really isn't; ten years after you shoplifted, the store is no longer damaged and nobody's around to question or remember details, anyway.  Its not like in the movies, if you ask someone in real life where they were on January 15th 2005, they are not going to have a clue.
So I propose that we apply this to immigration.  If an illegal immigrant has been in the country for a certain amount of time - ten years, fifteen, whatever seems best - and has not committed any felonies or additional immigration crime and have demonstrable work and status in their community, then they are treated as if they came to the country legally and may then begin to work toward becoming a citizen, from the point at which they are granted legal status.  In other words, as if they have just arrived.
Naturally a lot of details would have to be worked out, such as what crimes would negate the deal (identity crimes like fake ID probably should not, if done in an attempt to live legally and properly in the country) and who is covered, and what consists of status and employment, but this seems a decent approach.  Perhaps requiring basic familiarity and use of English as a language would also be a useful requirement - demonstrating a desire to fit in and be part of the culture rather than taking advantage of it but remaining part of one's former country.
AMNESTY 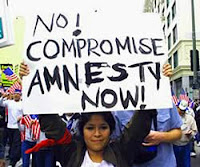 Yes, I hear you yelling "amnesty" which, technically this could be called.  Except it isn't.  Amnesty is law enforcement blanket agreeing to ignore your crimes.  This is following previously established legal concepts and precedent.  If you've been a productive, useful citizen and are a useful member of your community then you've proved that you are a benefit to the country and are given a new chance.
Its true that previous statements of immigration law changes have included these concepts, but usually they were too broadly written (anyone who has been in the US a certain amount of time) or were to be established first, rather than after - or in the place of - any other changes.
I think of this not as a compromise, but as a useful addition to law to change the way immigration is treated in the country.  Not as something given up in exchange for something we want, but something that is a logical and proper feature of the law.
THE RESULT
A result of this would be not very significant in terms of encouraging people to come to the country illegally.  If you have to dodge tougher immigration enforcement, have a harder time finding a job, get no welfare or driver's license, and have to stay in the country for a decade or more to qualify, that's not a very attractive concept.  But it is estimated that if all illegals paid taxes, they would increase tax revenues by as much as 77%.  Now, only a fraction of illegals would qualify - certainly fewer than a third - but that's still a noteworthy benefit to the country.
Further, it would allow neighbors, friends, and even family who live here in uncertain status to become full members of society rather than at its fringes or in the shadows of the law.  And that is a benefit to communities across the nation.
I know this concept is pretty controversial but I think it would be a good idea that would make a big difference to the nation and allow the culture to move forward positively from this era of foolishly unrestrained immigration.  But I'm sure you have a lot of tomatoes to throw.
Posted by Christopher R Taylor at 2:30 PM