"Hell isn't merely paved with good intentions; it's walled and roofed with them. Yes, and furnished too."
-Aldous Huxley

Recently, the EPA went to investigate potential environmental damage from a mine that was closed down in 1923.  Before they were done, the Animas River beneath the mine turned from this: 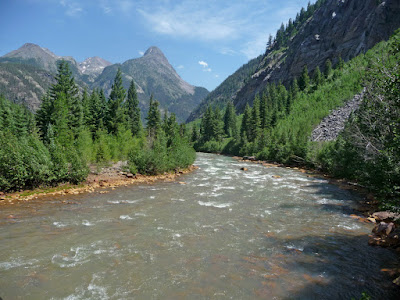 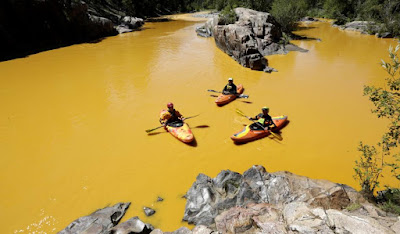 Levels of  lead, arsenic, beryllium, cadmium and mercury are up to ten times the acceptable levels that the EPA has established.  Most legacy media outlets are decrying a "mining accident" and not mentioning the EPA at all.  It took almost a week for CNN to mention the EPA as in the article linked above.
Let's say United Allied Mining Consolidated (UAMC), big mining company, had caused this gigantic spill, polluting a popular vacation spot and fishing, boating, and swimming scenic area with millions of gallons of poisons and chemicals.
How long would it be before the EPA had them in court and was fining them for millions of dollars in addition to the costs of cleanup?  How much would this cost the company?  How much would environmentalist groups condemn the action, and how many news stories would there be about the evils of mining accidents and how sloppy they are?
How long would Jon Stewart have done a segment on them, rolling his eyes and mugging for the camera?  How many Daily Kos, Huffington Post, Talking Points Memo, etc posts would there be about the wicked mining company's negligence and evil activities?
As it is, here's what we see at the Sierra Club:

Amusingly, the link they give goes to a page that immediately blames the EPA, not "an abandoned mine" whose ghosts apparently caused the leak, if the Sierra Club is to be believed.
Now imagine if you will, what the penalty will be for the EPA.
Go ahead, I'll give you a few moments...
That's right: nothing. At worst, some sacrificial lamb will be fired.  The cost of cleanup will be put on the shoulders of the taxpayers, although some especially clever and corrupt agency drone may try to sue the descendents of former mine owners for it.
The EPA will not pay a bit for what happens here.  They aren't even being shamed by the people who claim to care most about the environment.
This makes a pretty critical point about economics, politics, policy and culture for me.
I'm what you'd call an environmentalist.  I've posted about this before; I got our church to start recycling old papers, I pick up trash when I go for a walk.  I'm all for cleanup and blocking pollution.  I want us to be wise, concerned, and responsible stewards of the beautiful world we've been given, not rape it for all its worth.
The Gold King Mine is not a nice place.  Its leaking toxic crud into the nearby creek slowly and needed cleaning up.  I don't see where the US Constitution empowers the federal government to take tax dollars and do so with the EPA, but the job needs doing. This massive gush of death into the water is a bad thing.
And for me, its bad when this happens no matter who does it.  I don't have anyone in particular I want to shield from consequences or penalty in this fight.  Big business, small business, private citizen, government, it doesn't matter.  Its wrong and should be punished.
But the fact is, a business faces more penalties and consequences than government when it does exactly the same thing.  They are fined, sued, penalized, and punished.  What's more, the media makes sure they are shamed and publicly humiliated for their actions - and rightly so, that's one of the best functions of the fourth estate.
In other words, businesses are accountable for what they do.  They pay a price when they do wrong.  That's part of the function of a market as well as legal and moral function of a society, when someone does wrong, they pay a price.  It can take a while, and sometimes they get away with it, but there is still accountability.
Contrast that with government.  Politicians can pay a price for enraging their constituents, by being voted out, but that doesn't happen very often.  Particularly the higher up in office you get, the less often there's a price to pay.  2014 was one of the most shocking and extensive bloodbaths in American history, with voters changing the majority party in office in the Senate and heavily increasing it in the House. Yet still, over 95% of sitting legislators were reelected.  This, despite a roughly 14% approval rating of congress.  And its usually a higher reelection level for incumbents.
And while politicians may come and go, people working in the guts of government - staffers, agency heads, secretaries, etc - stay.  They stay through administration changes, party changes, they stay for decades.  They do not pay a price when the nation gets sick of one party or another, one politician or another.
In other words, government is not accountable.  What would ruin a company causes minor shrugs in government.  Watch, and see if there's even a demotion at the EPA for this debacle.  I bet nothing at all will happen.
And that's the key to understanding conservativism when it comes to markets and business.  Leftists distrust business - and that's good, they should.  But they trust government, and that's naive and foolish.  It might even be corrupt, since many leftists work at government.  Chamber of Commerce Republicans like Jeb Bush and Carly Fiorina distrust government, which is good, but they trust business, which is naive and foolish, or even corrupt.
Conservatives should and usually do, distrust both.  But we recognize that while business is accountable and pays a price for its misdeeds, government almost never does, and when it does, its in a minor and meaningless way.
And that's just wise to recognize.
Posted by Christopher R Taylor at 8:44 AM

In God we trust, everyone else...not so much.

In the early to mid 80's the BBC had an excellent series called Yes Minister, followed by Yes Prime Minister. It is all about the people behind the scenes in government, the people who are not elected, who are lifetime political powers and how they manipulate and destroy the country from within, with just as you say absolutely no accountability. This is one problem with term limits, the people behind the scenes won't go anywhere. A healthy distrust of anything that human beings have to do with is wise.