WORDS AROUND THE NET 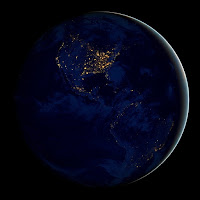 Back when I started Word Around the Net about nine years ago, I was mostly reacting to comments, and trying to highlight the most interesting ones I found on the many blogs I scrolled through each day.  I'd noticed that often, the commenters were more interesting, informative, thoughtful, and useful than the blog posts themselves, or at least as much so.
Over time, the blog developed more into my thoughts on topics, and having read a lot about how to build an audience, I tried to get 4-5 things up every day, scrounging for topics and things to write about.  As a result, a lot of it was, if not filler, at least not the finest and freshest material possible.  There's always a lot to rant and comment about, but rarely anything truly meaningful and important to say.
For years I pushed this model, and built up to around 500 readers a day; not great, but better than about 80% or more of the blogs out there.  The whole thing crashed, hard in 2008 and I lost about half or more of my readers.  Still, I was able to keep the numbers up to around 200 a day most of the time, and then in 2012 I just lost interest.  So did most readers.  And my Google account blew up and I couldn't access my own blog for months.  I lost more readers.  Now I'm lucky to get 75 a day, and usually its lower.
Honestly the numbers don't concern me much any more.  Although I managed to turn my blogging into two paying jobs, they both blew up after a few months and I've never been offered anything more.  I discovered something though: if I post ten times a week or two, I get about the same number of hits.  And I suspect that about half or more of the hits I was seeing on my counter were drive bys, spammers, and search engine visits.  As in: not really readers anyway.
In fact, it appears that I have a core of readers that hasn't really changed much for almost a decade, who waits for content and comes by to read when there's something to read.
So my philosophy has shifted.  Instead of trying to put content up every day or follow a regular tight schedule as I did for years, instead I'm focusing on trying to hit a home run each time I post; trying to post only when something particularly interests me and I have a great deal of passion and something to say about it.
That won't preclude something goofy once in a while, although I tend to use my facebook page for that, or twitter.  But mostly I'm trying to post only when I really have something in me, rather than just to get content up.
And with my other writing taking up so much of the limited energy and time I have to work, the blog sort of waits until I can get there.  So I apologize if you want more stuff on here, but I think blog reading has shifted significantly.
In 2006 when I started, people read blogs.  They'd go to a blog and read its contents each day.  There were avid blog readers.  These days, I think most people use feeds and go to aggregate sites and pick stories to read.  So instead of being a fan of Bob's Big Blog, people are fans of Bob and read stories rather than check each day.
Maybe I'm off base, but that certainly seems to be the way things are going right now.  The age of the blog was about 2004-2008 or so, a tight window when you could get in and really fire up the interest.  Now, blogs are pretty low on peoples' priority list.  They don't fit as well on a phone and let's be honest, not many people are really readers these days.
So, that's an update on what's going on here at Word Around the Net.  Take care, and thanks for dropping by, however you do it.
Posted by Christopher R Taylor at 4:10 PM

I appreciate the homerun philosophy. I would prefer to read something that has some meat to it then just content for the sake of content. Gerard over at American Digest is who turned me on to you and so I added you to my feedly. I enjoy your writing and your attention to the details of stories. Your Common Knowledge series is my favorite I would say. Keep up the good work.

I stop by now and again and always leave with at least a little new insight and often a better way to express things that are common to both our philosophies.

I don't do TV and very seldom bother with movies either delivered to the home or in a theater. The latter involves being part of a big collection of humans all together and that doesn't appeal much anymore. It's also perceived by some as a target.

So, staying at home, going to work, and working about the home are the daytime activities. Evenings are filled with reading and mostly the internet. The reading began with Chex News on the back of cereal boxes when a kid and it's still there stronger than ever.

What you do is important and I appreciate your efforts. Whatever you write I will usually read all the way through. If you choose quality over quantity, that's fine. You give something of value for free - this guy is in no position to complain.