"Maybe we could chug on over to namby-pamby land, where maybe we could find some self-confidence for you, ya jackwagon!"


So some guy has come up with a new movement and is posting images about men and culture like this: 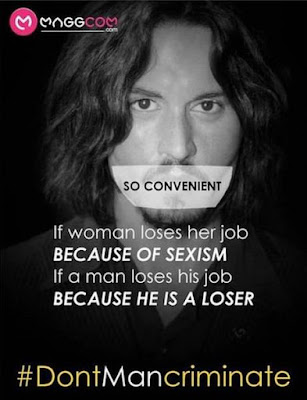 Basically its all about what men face in society and the cultural things that are assumed about them.  Things like emotionally restrained (the fault of society), how men don't get free drinks, etc. 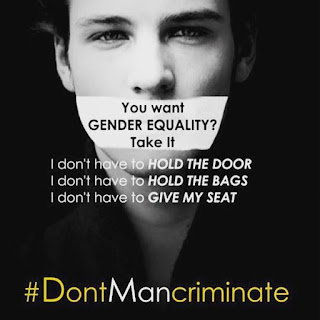 Its hard to say if this is meant seriously or as a joke.  Is he really trying to create a movement for men's rights or being silly to make fun of the way feminists act today?  I'm leaning toward the latter, but even if he isn't, this is a perfect satire of the way leftist women get the vapors over everything.
But if he's serious, this is a perfect example of the victim/oppressor ideology I posted about yesterday.  A man takes responsibility of their life and takes on the problems they face, they don't whine about it.  A man shrugs at women being treated well - even better than himself - because that's how he wants it.  A man doesn't feel diminished or sad by people's opinions, because he's his own person, not defined by their reactions.
If this is serious, its man whining about being a victim of an oppressor society, which is ridiculous and pathetic.  Its not that the things he says are not an accurate statement about our culture.  Its that a man doesn't care, or if he does, he changes things.  He doesn't whimper online and make a hashtag, because he's grown up and deals with problems rather than weeping on the world's shoulder about them.
Yet for every giggle or mockery these images prompt, every sneering disregard, that's the same response that the feminist trash about "manspreading" and "thought rape" should prompt.  Instead of being taken seriously and acted upon, this feminist insanity should be given at most a little quiet chuckle and then forgotten.  Because its just as pathetic, pointless, and infantile.
Posted by Christopher R Taylor at 8:30 AM