"Who the hell green-lit that??" 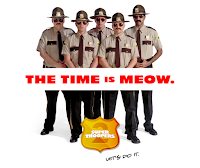 Super Troopers is one of the funniest comedies in the last 20 years, let alone the history of film.  I would rank it up there with Blazing Saddles, Duck Soup, and Office Space.  Its so quotable and rewatchable that it really is a classic.  Super Troopers almost didn't get made; and you can see why.  A comedy starring and written by five unknowns was just not worth investing in for the big studios.
And back when it was made, independent studios were uninterested in something that "commercial" and lacking in artsy feel.  Finally a friend found a backer, a retired investment banker who took a gamble on the script and history was made.  Well that's probably overstating it, but they did make quite a funny film.
Now the team is making a sequel, and their problem this time out is less getting money than having control over the film.  Studios will back a sequel to a huge hit, but they won't do it without control over the script, casting, etc, and so on.
Another problem is that in today's movie market, the studios want sure things, and big sure things at that.  Jay Chandrasekhar wrote an article in the Daily Beast about funding Super Troopers 2 and in it he quoted a studio friend:

See, the big studios are corporations that answer to a board of stock holders.  And the stockholders aren't interested in great film making, they are interested in making money off their stocks.
So the Broken Lizards guys went to crowdfunding to raise money for their film, and have done quite well.  They did so well that they don't need a big bunch of studio dollars and interference to make the movie.
But here's where it gets really interesting.  See, crowdfunding sites raise money by offering goodies and the joy of helping a product succeed.  They are not investment sites so much as a chance to be a patron of something you want to see on the market as well as a chance to get something from the company.  Free copies, a mention in the book, a token in the game named after you, and so on.
Well that's all about to change in a big way.
Jay Chandrasekhar writes:

At our meeting, I vented to Slava about my perception of crowdfunding. I told him I wished people could invest in the movie and then own an equity piece of the backend. He said, “I totally agree.” That’s when we hit it off. He said that there is legislation in Washington, as we speak, that if signed, will make equity-based crowdfunding a reality. Think about that.

I'm with Jay here.  Think about that.  Its very likely that soon you will be able to donate to a crowdfunded project and get money back from its sales.  In other words, it will actually be an investment, not just patronizing.
This is a huge key in changing the way that media gets made.  All those projects the studios and TV channels pass on because it isn't hot or doesn't make sense to them?  If this happens, they can have a chance.
Ever notice how some stuff that used to be really hot disappeared after a while?  You almost never see westerns any longer, because the studios and such decided they just don't make enough money.  Wish there were more goofy comedies without grossout and sex?  Wish someone would make the real Red Harvest instead of knockoffs like Yojimbo and Last Man Standing?  Want to see a film made about your favorite comic book?
Well crowd funding investments can make that possible.  Instead of just asking for money from people willing to donate out of a love of the product and maybe some goodies, now you can start attracting serious investors for serious projects.
And while the payback isn't likely to be much - .01% of the profits isn't a lot, after Hollywood accounting - its more than you can get now.  Further, it lets people bypass the system.  Hollywood studios will distribute films it isn't interested in making.  In fact, it will distribute films it despises, like The Passion of Christ and that means people can get films made about topics and involving stories that don't fit the narrative.
All those war movies that could be made about the war on terrorism?  Those could be made.  Films that depict America as a positive force instead of a miserable place of racism and crushing oppression could be made.  It basically opens up the entire process to film makers and writers instead of studio stockholders.
And it turns the financial side of films over to the public and their desires for films rather than what studios think people desire.  And finally, it makes film making have a more local character.  It used to be true that studios were concerned about "Ma and Pa Kettle in Indiana" when they would make a film: how would this alleged American heartland family react?  Usually they had a caricature of these people in mind, but they were genuinely worried about how Americans would like a film, because that was their audience.  Annoy Americans, lose money.
Today, the film making business is international and they're more worried about what upsets China than they are America.  You can kick America in the teeth all day long for laughs, but if you do something that upsets China's government, you lose that market and millions of potential dollars in ticket sales.
Crowdfunding would be more localized and less international, and shift the focus to American ideals and sensibilities rather than, say, Chinese.  Which means a remake of Red Dawn could have a Chinese invader instead of North Korean (??).  And when someone makes a film of a book like The Sum of All Fears  the bad guy can be Muslim radicals in the Middle East, not a militia of white supremacists (??).
This changes everything in entertainment, because it shifts the funding and hence creation of projects such as television, theater, music, and movies away from a small group of powerful corporations and to the general public at large.
Posted by Christopher R Taylor at 11:22 AM

Great concept but why is legislation necessary for crowdfunding equity to be "legal"?

The legislation is necessary because of very tight laws requiring full disclosure by way of an expensive Prospectus from the dude who wants to raise money before he is allowed to raise pubic equity money.

Lawyers working for the dude who wants to raise money write Prospectuses.

Lawyers who work for the government vet and approve those Prospectuses.

Lawyers are very well paid for securities work on Prospectuses.

Lawyers are the largest group amongst members of Congress.

There is no hope whatever that equity crowd funding will be allowed without lawyers getting a huge piece of the action.

Yeah I think that its not so much permission as working out the laws involving taxes and investment, regulations etc.

Crowdfunding equity is known as "investing" under the law. Many, many conmen have stolen many, many fortunes from unsuspecting people over the years, particularly during the 1920s.

Therefore, the regulations around issuing investments are *extremely* clear, and in particular, one must have a large amount of money already in order to make early investments, on the assumption that rich people can eat the losses better than poor people.

Well from a Hollywood exec's point of view, its not so much about the money made overall, its about moving stock. See, those smaller movies that make decent money will earn you cash, but won't make your stock grow.

Stockholders control the big studios, and they want to make more money off their stocks. So films that do this are what they prefer over films that don't. At least, that's what this exec told Super Troopers, and it seems pretty plausible.

From an investing point of view, crowd-sourcing is about the safest possible option. You are billed absolutely nothing, not one penny of your money goes into the product unless the source goal is achieved.

Yojimbo a knockoff? That's a bit harsh, don't you think?

NOt at all, its a Japanese setting remake of Red Harvest, the original book by Dashiell Hammett. A good flick but... not the original :)