DON'T STAND SO CLOSE TO ME

"It’s a double standard to ban leggings as they are only worn by women."


You've probably seen this, if not had a friend post about it on social media.  A girl wore this outfit and got sent home from her high school for inappropriate clothing. 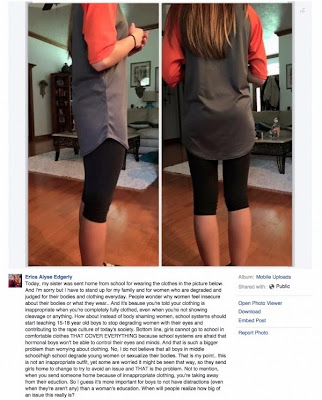 The text is small to read in the image unless you click on it, but in part it reads


How about instead of body shaming women, school systems should start teaching 15-18 year olds to stop degrading women with their eyes and contributing to the rape culture of today's society.  Bottom line, girls cannot go to school in comfortable clothes THAT COVER EVERYTHING because school systems are afraid that hormonal boys won't be able to control their eyes and their minds.  And that is such a bigger problem than worrying about clothing

That just sounds so reasonable and empowering and socially just, right?  Wrong.
Putting aside how this person clearly doesn't understand the Social Justice Warrior catch phrase "body shaming," and is dropping popular current college womyn's studies course terms like they're the mailman in Better Off Dead, let's consider this a moment.
This girl wore leggings so tight they may as well have been body paint, then threw a longish shirt over the top of them and went to school.  I'm not going to post images but you can definitely find them online what it looks like when girls wear "yoga pants" (aka stretch pants etc before some marketer got a hold of them) and its not "covering everything" in all caps or not.
I don't know what this school's policy is on clothing, but they all have one.  Its possible the school simply has a "no leggings/yoga pants" rule.  If so; tough, go home and change.  Welcome to life, it rarely makes sense and you have to do things you don't like no matter how cute you thought you looked in the mirror.
But stop a moment.  This girl is technically wearing clothing on all of her bits, but the clothing is the kind that is going to excite and attract attention.  She's doing it on purpose because she wants positive attention and appreciation for how she looks.  If she's like most girls, she's been raised on billions of compliments on how pretty she is and that's what she shapes her reality around.  And that's a problem, but its a separate one from the issue at hand.  But its not like she put it on by accident or closed her eyes, spun, and grabbed the first three objects in the room to wear.
And that attention is what she'll get.  Because, and I know this is going to be tough for some to handle, but that's how men and women are made.  Guys like how women look.  That's the way we're hard wired.  And the more we can see, the more we like.  Some stuff we get to see has a specific kind of biological and psychological reaction.  This is not some learned cruelty or rape culture, its actually quite beneficial to us as a people.  It helps us continue breeding and existing on this earth.
Liking girl parts means guys and girls will be more likely to have sex and have children.  This is a good thing.  Giving guys more intimate and direct glimpses of these parts has a specific and predictable result.  The younger the man, the less self control, maturity, and familiarity he'll have with these bits, and the more overwhelming the reaction is.  Make no mistake, male teachers have to deal with this too.
Every guy that reads this knows that wearing a really short skirt or a tight top or wearing super clingy thin stretch pants around a boy is going to necessarily and without exception generate a certain kind of response from the guys.  That's not possible to "train out" of kids.  It just isn't.  You can teach them to be more quiet about it but you can't make it stop.
In other words, whining that guys need to learn to not letch on girls who dress in a lecherous fashion is simply ignorant and foolish.  You need to get a better grip on life.  Its like whining that every time you drop the barbell on your foot it hurts, and someone needs to teach that barbell to be less heavy instead of watching where your foot is.  Its like complaining that your hair gets wet when it rains and the water should stop hitting your head, rather than you wearing a hat or use an umbrella.
The problem is with you dear girl, not the guys.  You're deliberately wearing something that provokes a certain inevitable and necessary reaction from the guys.  That's not possible to avoid.
There's a joke by Dave Chapelle that covers this.  He's telling a story about a girl that dressed really trashy and goes on to say:

Wearing a whorish outfit doesn't make you a whore.  That said, doing so with the intention of getting laid and having nice gifts given to you... might.
This outfit is inappropriate for school.  It is an outfit that you ought not wear for obvious reasons.  The complaint that schoolboys are being all hormonal and need to be sent to camps to be reeducated so they stop is idiotic and what's more contradictory and hypocritical.  How many billions of times have we been told that women are prisoners of their hormones and guys must just put up with it?  That we have to deal with it because they cannot help themselves?  Yeah.
The truth is, every time in this culture something restricts a woman's personal whims and desires then its the man that must change.  Every time.  Just because I'm wearing 4" heels, a thong, and nipple clips doesn't mean you should lust at me, rapist!  There's no sense that a girl should rethink what she's wearing, only that guys are scum and potential rapists for reacting to it.
And I know that more than a few conservatives reading this and seeing the report elsewhere responded much the way the rest of the culture did: its not that bad!  They're being mean!  Its oppressive!  That girl should be able to wear what she wants!
Those people either never were high school boys or have no memory of what it was like back then.  You cannot blame the victim for being assaulted or groped - the wrong done is always the fault of the wrongdoer.  But if you walk down a dark alley in Detroit counting a brick of fifties you shouldn't be surprised if someone does wrong to you.
There is such a thing as wisdom, discernment, restraint, and common sense.  If you're doing something to provoke a reaction - even if that reaction is wrong - then you should not be surprised when that reaction happens.  Just like the Texas art show provoked an angry reaction by drawing Muhammad, you have to temper liberty with wisdom.  Is this wise, is this proper?
Sometimes it is.  Sometimes you have to do something provocative and shocking in order to achieve a great goal.  The entire principle of civil disobedience is based on this idea: to challenge injustice and wrong by provoking a response.  But the cause has to be very good, very important, and very just.  Wearing that cute outfit?  Not so much.
Posted by Christopher R Taylor at 10:22 AM

IMO, that outfit is more modest than jeans and a tucked in shirt. Kinda of a stretch to call it whorish. All parts are really well covered except mid thigh down. I don't see it.

I wouldn't really call it whorish either, I used an extreme argument to make a point that might otherwise be missed. Her clothes aren't right for school, but not trashy.

What that girl is wearing is just plain sloppy and no explanation is required. Her parents should be punched in the face for buying her those rags.

Miniskirts were in style when I was in high school, and I walked around in constant state of elevated blood pressure with intermittent bursts of steam coming out my ears, yet I never touched a girl that didn't first advance to contact with me. The pictured outfit is a lot tamer than what I saw every day when I was a teen.

Isn't it ironic that in this hyper-sexualized society in which untrammelled sex is considered by a great many to be the greatest good and an absolute right the feminists that initially demanded a woman's right to rut like a man now demand absolute monastic chastity of them? Women were always able to control men just fine using their natural feminine wiles; this new attempt at power and control is just plain stupid and will utterly fail.

"Just like the Texas art show provoked an angry reaction by drawing Muhammad, you have to temper liberty with wisdom. Is this wise, is this proper?"

I would say that protecting the absolute right of freedom of speech and freedom to criticize bad ideas is absolutely right and proper. How are we supposed to have a free society if we can't even speak our own minds for fear of having our heads blown off? What kind of society will we be living in if we simply cede the ground to whoever whines the loudest?

Oh wait, I forgot, we already know the answer to that one, because we live there. We have a PC society, and it's because we're willing to shut up and apologize the moment someone starts screaming that they're offended, regardless of the justice or even the sanity of their complaint. Muslims just scream more violently than leftists, that's all.