"Feminism was established so as to permit unattractive women easier access to the mainstream."
-Rush Limbaugh


So, the "nutritional supplement" company Protein World put out an ad for their products that looks like this: 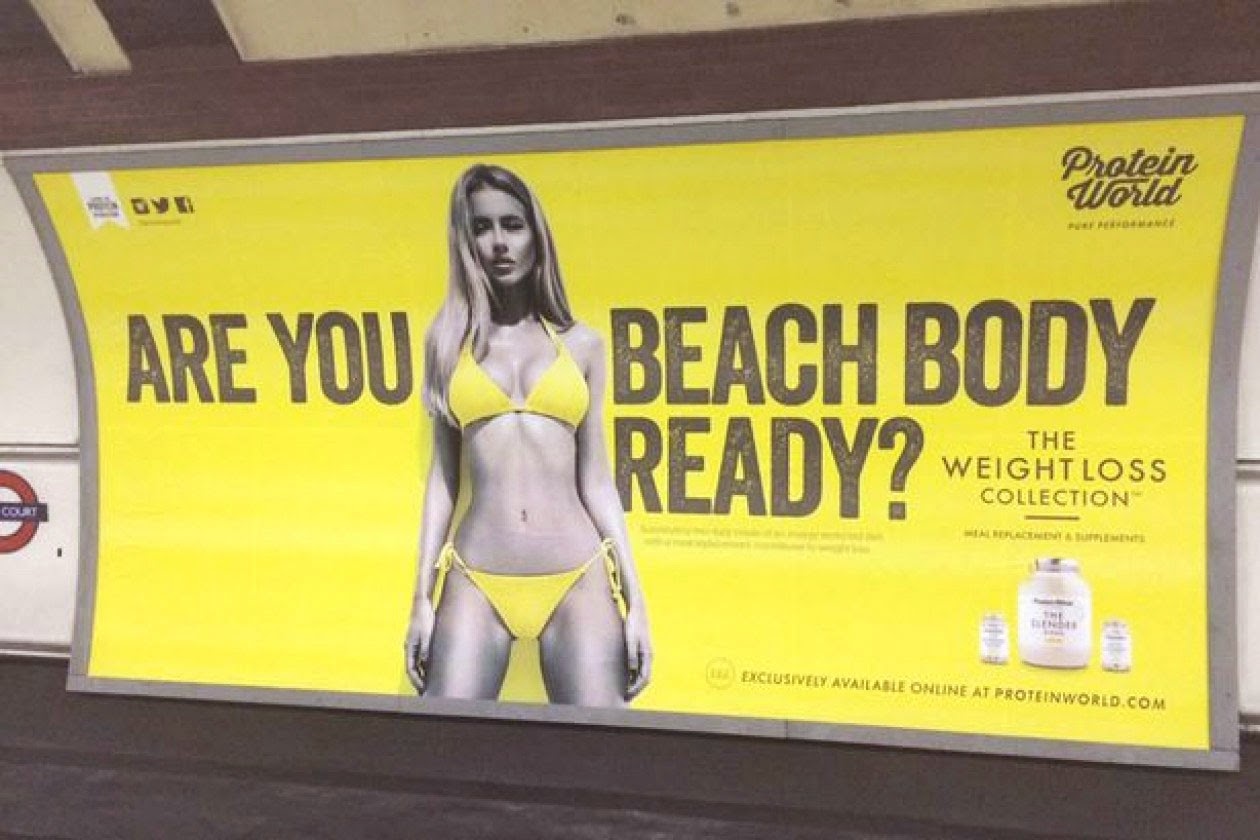 That's pretty non-sensational, and thousands of ads like it have been put out in the past along the same lines.  Women came up with the term "beach body" to refer to one they think looks good in skimpy clothing such as that worn on the beach.
Well, this time a 'feminist' threw a fit when she saw the ad on a bus.  It offended her sensibilities!  How dare they suggest their products using a female-invented term and concept?!?  She fired off an angry tweet, to which the company suggested she not impose her insecurities on them, and off the story went.  The outrage machine was cranked up to 11 and the screaming and death threats sent to the company started up.
The company stood its ground, probably because as they report, they're making a lot of money off the added free publicity in increased sales.  The ad is being shown everywhere, for free, and generating business for Protein World.  Well played, I guess.
But here's where it gets ugly.
The Guardian ran a bit* attacking Protein World for being sexist and terrible for daring to run such an ad, and petitions started cycling about. In response, the UK government took swift, decisive action and... banned the ad.
They declared the advertisement sexist, and hence illegal under the guidelines and rules set up under Tony Blair and Trevor Phillips.
Now, the ad might be annoying and some women might feel insecure about their looks because a pretty slim girl is pictured, but that's not sexism.  The fact that someone reacts poorly to an image is their problem, not the image's problem. That's why when someone puts up a piece of junk as art such as a crucifix in a jar of urine, I don't say "there oughta be a law" or "this needs to be banned" but rather "this isn't art, this is trash."
Because my offense is mine, and what I feel or how offended I am is subjective and internal, with no bearing on how others must be compelled to behave.  Social pressure to stop doing obnoxious things is one thing.  Government power to silence them is another entirely.
The ad isn't sexist, but even if it was, that's not cause for banning.  Its deeply saddening to me that the first nation on earth with a real, codified guarantee of free speech (England, Magna Carta) is the one that is banning an ad because it says something they don't like.
Sexism in an advertisement may be wrong or ugly but its not something the government has the slightest right to take legal action against.  If freedom means anything, it has to mean letting people do something that I don't care for.  Simply upsetting or annoying me is not cause enough to silence or stop someone else, especially with the power of the government.
Alcoholics have booze advertised and publicly displayed all around them.  Christians put up with immorality and mockery of God on a regular basis - indeed, in language almost constantly.  Former smokers have to deal with cigarette machines and smokers nearby.  Being exposed to things that make you uncomfortable or feel bad about yourself is part of life.
Whining and running to the government to make the bad thing to go away is just wrong, pathetic, childish, and tyrannical.  And it seems like more and more pretty things are being attacked for being pretty.  Robert Stacey McCain wrote recently on how feminists seem outraged by beauty and want it stopped.
Why would anyone want to stamp out beauty?  Because its 'unfair' and 'unegalitarian.'  Some have an advantage that others do not - beauty is innately attractive and pleasing to others, so they gain a benefit that some lack. And this concept enrages the marxist and the radical leftst: beauty in some and no others results in unequal results, and that's a violation of their philosophy and guiding principles.
How much of this philosophy is behind the attack on this ad and how much is just some overly protected snowflake Millennial whining that she feels bad is unclear.  In the end, the result is the same: tyranny to crush something that one political side doesn't like.
*The piece in the Guardian claimed that Cuba has no public advertisements - which is utterly false and ridiculous.  The quote was 'It was only after visiting Cuba, a totalitarian country where there are no advertisements, that she realized "how much my field of vision is occupied without my consent by images and messages that want to sell me stuff."'
Grow up buttercup.  The cringing of feminism continues.
Posted by Christopher R Taylor at 9:34 AM