DYSFUNCTIONALITY AS A WAY OF LIFE

"Protecting vulnerable minorities from hate speech is one of the most basic and fundamental of human rights obligations, and all human rights organizations worldwide have emphasized this." 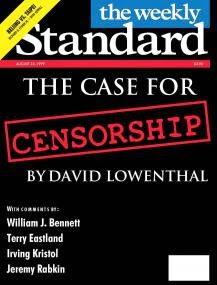 There is an article recently at a site called Thought Catalog which puts into plain terms something that a large minority of people in the west seem to promote or believe.  It is a response to the slaughter of a "Mad" type newsletter staff in France (Charlie Hebdo) by radical Muslims and it calls for freedom of speech to be limited:

She goes on to claim a love of free speech, but then calls on restrictions of that freedom:


Like any sensible person, I am a strong believer in the unalienable right to freedom of speech and I understand that defending freedom of speech is the most important when it's speech that many people do not want to hear (like, for example, pro-LGBT speech in Russia). Freedom of speech is the core of any democratic society, and it's important that freedom of speech be strongly respected and upheld. Censorship in all of its forms is something that must always be fiercely opposed. But we must never confuse hate speech with freedom of speech. Speech that offends, insults, demeans, threatens, disrespects, incites hatred or violence, and/or violates basic human rights and freedoms has absolutely no place in even the freest society.

Now, as Maeteloch wonders at Ace of Spades HQ, did the same person write that first sentence and last one?  This kind of attitude is based on the idea that people need to be free from feeling bad, or hearing things they don't like to fear.  The 'right' to avoid offense - for some protected groups, not all - is a common theme on the left, and it grows in noise every year.  They've pretty well abandoned the term "political correctness" for "social justice" but the song remains the same.  And behind it all is a basically infantile understanding of life.
Generally speaking, I hold psychiatry in contempt.  The jargon, the nonsense promoted as deep and meaningful (Freud's repulsive theories on sexual desire toward parents in infants, for example) as well as the overall attempt to replace morality and sin with feelings and psychiatric forces is at best obnoxious and at worst destructive and repellant.
Its not that psychiatrists and psychologists have nothing useful to say.  They are often good at diagnosis and examination of problems.  Its that their solutions are almost always useless and the entire profession seems to be an endless con: nobody ever seems to get better, and always has to come back for more sessions.  Its as if they can't quite put their finger on the real problem or its root causes.
However, that's not to say that some haven't been helped by this kind of thing.  Some people can be forced to recognize what they are doing or ignoring, and some useful basic common sense tips can be handed down.  The "12 step" style self-help groups have been amazingly successful in helping people understand their wrong and turn their lives around.  And what's more, it helps people who have to deal with addicts and messed up folks in their life understand and change as well.
There's a pattern that often develops between an addict and their loved ones that is so predictable and common that it has become established and given names.  Essentially the person who is the addict is feeding their desire so much that they ignore or attack everything that gets in the way, and subsume all of life into that desire.
This pattern becomes quite horrible, with everyone essentially living their lives to not anger or upset the increasingly irrational and unpredictable addict, trying to hold their family together and being almost constantly emotionally manipulated by the addict.
This system "called co-dependency" is only broken by recognizing the patterns and the people who suffer from it facing up to some basic realities of existence.  The 12-step program (and really, common sense and experience in life) forces the people there to recognize a few basic truths of life.
Now again, these seem sort of common sense, but its easy for us as human beings to fall into self destructive patterns when in stress or great pain.  As we age out of childhood, we generally learn these lessons and stop blaming others for how we behave or react.  We learn to control our emotions and behavior with varying degrees of success in an increasingly successful manner as we mature.
Children do not understand this and have not learned that level of emotional maturity.  They blame others for how they feel, they react to others without thinking, and they insist others (and the world) change to match their desires and lives.  They react by selfish emotion rather than reasoned understanding of others and thought.
And while some grow out of this, apparently some - more each year it seems, sometimes - never do.  In fact, one might postulate that the bubble wrap culture of overprotecting young people from consequence, failure, and challenge is necessarily creating generations of people who are never forced to grow up and deal with life as it is, rather than as they wish it to be.

Every feminist that whines she's 'raped' by some man spreading his legs more than she wants, or every black person that claims 'racism' when a stadium is torn down, or a homosexual claims 'oppression' when someone won't bake them a cake is someone demanding that other people are to blame for how they feel and that they must change to make them feel better.
This is a classic pattern of the codependent, of someone who insists, insists that others are to blame for all their problems and feelings, and what's more that everyone else must change so that they stop feeling bad.  Its a basic psychological disfunction, it is a pathology of mental behavior which, objectively, any qualified psychologist would immediately diagnose as obsession or neurosis, at the very least.
Instead, they're taken seriously, governments react to coddle them, and major organizations such as the United Nations are passing rules insisting that people must change to make others not feel bad.  The truth of the matter is, this is stunted emotional maturity.  It is a bad thing which people - for their own good - need to move past and grow beyond.
Failing to do so for them is actually damaging to them as a person and to their growth.  It is destructive to allow or assist someone in this behavior, its bad for them, and wrong to do so.  You're hurting people by assisting their lack of growth.  Its the same kind of false idea of love that would prevent punishing a naughty child because it makes them feel bad.  Real love prompts you to help people to do what is right and good for them even - perhaps especially - when they don't like it.  If you love your kids, you make them eat their vegetables, too.
When Canada set up "human rights tribunals" to check on people abusing others' rights, they quickly became leftist kangaroo courts designed to protect some favored groups and attack disfavored ones, based on this calculus of "hate speech" and feeling offense.  It is inevitable that this take place in any society where speech is limited not by its likelihood of destruction or damaging other rights, but by the offense some might take.
And its all based on this childish concept of avoiding personal responsibility, growing up, and blaming others for how you feel.  Whether you take offense or not at something is not anyone elses' problem but yours.  Offense is entirely, 100% without exception subjective and internal.  If you feel bad, that's your problem, not mine or anyone else's.
That's not to say that in a civilized society we ought not be polite and generous, and to be certain in modern cultures we must be tolerant of things we don't like - but that's a two way street and requires no laws.  If you think others should tolerate you and be polite to you or you will get upset and offended, then  you must be polite to them and try not to offend them, either.  And jailing or fining someone is offensive as all get out.
In fact, laws are useless in this regard, except as a way of imposing a tyrannical control on people that aren't liked.  You cannot prevent someone from feeling or taking offense by law.  You cannot fix someone's feelings with a statute and punishment.  They'll still feel offense, and take offense, whether the law is there or not - and what's more will find new ways and times to feel offense which the current laws do not cover.
Using law to fix behavior is always, without exception a failure.  Laws cannot and do not change people within.  They only modify public expression of someone's nature, when they think they'll get caught.
In essence this whole movement is a desire to make life comfortable, happy, easy, and nice feeling for everyone.  Its the ultimate judicial expression of hedonism and selfishness given form.  If people think that the only thing that matters in life is the here and now, their personal satisfaction and pleasure, and what they can touch and feel, then this is inevitable.  Its also inevitably going to fail and lead to crushing tyranny as the ever-expanding series of laws restricts everyone more and more in an Animal Farm pattern of expansion.
Grow up.  How you feel is not my or anyone else's problem, its what you're doing to yourself.  No laws can fix that, only a change of the heart in those around you.
Posted by Christopher R Taylor at 1:06 PM