"Are we really all Charlie? No, no and shamefully no." 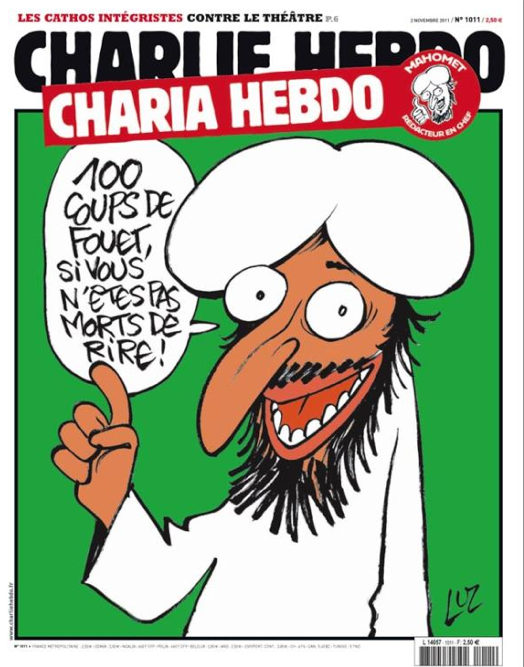 The terrorist murders in Paris of the staff of a satirical magazine has shocked the continent, even if it had less impact on the president of the US.  A huge "unity" rally was held, although what exactly it represented, meant, or the unity was about is not exactly clear.  It seems probable to me that most of the people involved thought it was some kind of big multiculturalism celebration.
One of the slogans that popped up is "Je Suis Charlie" - I am Charlie -  in a sort of solidarity with the people of that magazine and the slain journalists.  The idea is that the French people (and others around the world) are stating that these people don't stand alone and we're all opposed to brutal murder by radical Muslims.
Except, as Andrew Bolt points out, we're not all Charlie:

Unlike most politicians, journalists, lawyers and other members of our ruling classes, this fearless magazine dared to mock Islam in the way the Left routinely mocks Christianity. Unlike much of our ruling class, it refused to sell out our freedom to speak.

Its greatest sin — to the Islamists — was to republish the infamous cartoons of Denmark’s Jyllands-Posten which mocked Mohammed, and then to publish even more of its own, including one showing the Muslim prophet naked.

Are we really all Charlie? No, no and shamefully no.

No Australian newspaper dared published those pictures, too, bar one which did so in error.

The Obama administration three years ago even attacked Charlie Hebdo for publishing the naked Mohammed cartoon, saying it was “deeply offensive”.

President Barack Obama even told the United Nations “the future must not belong to those who slander the Prophet of Islam” and damned a YouTube clip “Innocence of Muslims” which did just that. The filmmaker was thrown in jail.

The New York Times refused to publish the latest cover of Charlie Hebdo out of fear that it might offend and be hurtful to Muslims.  NPR made the same call.  Determined to be a leader in craven capitulation, the New York Times referred to Muhammad as "The prophet" Muhammad - a trend echoed in several major news sources such as CNN recently, offering Muhammad an honorific denied other prophets and religious leaders they mention, such as Joseph Smith, Moses, Buddha, and Jesus of Nazareth.
The Associated Press ran the cover picture, but cropped it so much its essentially censored and not recognizable.  President Obama in January through his press secretary announced that "the White House has a moral responsibility to push back on the nation’s journalism community when it is planning to publish anti-jihadi articles that might cause a jihadi attack against the nation's defenses forces."  Former President Jimmy Carter blamed Jews for the attack because they are refusing to roll over and die for the palestinians.  On and on it goes.
Some seem to be coming to the realization that those on the right have long understood - that radical Muslims are a deadly blight determined to destroy our civilization and liberties - such as Bill Maher, who said "This happens way too frequently. It's like Groundhog Day, except if the Groundhog kept getting his head cut off... we have to stop saying when something like this that happened in Paris today, we have to stop saying, well, we should not insult a great religion."  The mayor of Rotterdam Holland - a Moroccan immigrant - was very angry:

'It is incomprehensible that you can turn against freedom,' Mayor Aboutaleb told Dutch current affairs program Nieuwsuur (Newshour).

'But if you don't like freedom, for heaven's sake pack your bags and leave.  'If you do not like it here because some humorists you don't like are making a newspaper, may I then say you can f*** off.

'This is stupid, this so incomprehensible. Vanish from the Netherlands if you cannot find your place here.'

He went on to note that their evil acts are making people suspicious of law abiding Muslims who are fitting into Dutch culture.   France's Socialist Prime Minister Manuel Valls recently said:

"Yes, France is at war against terrorism, jihadism, and radical Islam... but not against a religion." "France is not at war against Islam or the Muslims.... France will protect all of its citizens, those who believe and and those who don't"

The problem is, they're catching on quite late, are few in number, and one questions their sincerity.  Yes, they're upset now, but what will they do?  And how long will this ire last, given their previous behavior toward Islam?  Its all fine and good to rail against radical Muslims after an event like this - the world did against them after 9/11 - but then mere weeks later the song started to change when it became apparent someone was actually going to do something about it rather than talk.
Because ultimately, "Je Suis Charlie" is not about free speech. It's about French people not wanting to be executed at gunpoint for saying what Islamists don't like.  They aren't taking a strong stance on speech and expression but on fear and shock at the killings. So the core idea of multiculturalism and social justice held by the left is unchallenged and unchanged, just this particular specific aspect of it.
Yet there's an aspect to this that someone at Ace of Spades HQ brought up I think is worth repeating and considering.  Posting under the name "Wheatie" she noted:

Let's call those 'No-Go Zones' what they are...they're Colonies.

It's not immigration if you are ceding them territory. It's Colonization.

And that's a key point here.  See, in parts of Paris, as well as parts of different cities in England (Primarily London) and its getting that way in places such as Dearborn Michigan in the USA as well as elsewhere, Muslims are creating colonies.
They are "no go" zones that cops only enter in force and following careful Muslim-approved guidelines established at their headquarters.  Areas that speak Arabic (or other native languages) and are Muslim-only.  Areas that non-Muslims are attacked for entering, and women are treated as if they are in the depths of the most radical Muslim pockets of Syria and Pakistan.  Areas where the liberties and structures of the surrounding society are denied.
These aren't areas like Chinatown or Little Italy, where the culture dominates the area with food and speech.  You could always walk into these ethnic regions of cities such as New York City and Chicago, buy things, eat, do business, and leave.  Not so these Muslim colonies.
And the host nations are going out of their way to assist these colonies in their establishment.  New laws or exceptions to existing laws are passed.  Courts and police look the other way, even going to colonial leaders to ask permission to act.
In the old days, a superior force would colonize a less-advanced area, establishing their existence through strength and technological superiority.  Native Americans outnumbered white colonists but were kept back through superior weaponry and fortifications.  These new colonies are only able to exist and thrive through the assistance of multiculturalism and self-destructive policies of their host countries.
In other words, its like someone deliberately introducing cancer into their system, then eating and behaving in such a way that helps the cancer thrive.  Eventually it will overwhelm and destroy the host body, but until then maybe it can help them politically.
Because make no mistake that's exactly what the motivation is.  The Labor Party in England made that specifically and literally clear in a memo that was leaked, saying they wanted to make more immigration possible and coddle the immigrants so that they would gain political power by the new votes.  They knew they were going to have a hard time winning over English voters, so they figured they'd just add new ones.
Except these new ones don't want to be English.  They want to be al'Albionians, or whatever the Arabic conquerers would call the British Isles.  They want England to go away, they want to destroy democracy, throw away basic human rights and liberties, obliterate common law, jettison the government and establish an Islamic government in its place.  All the culture, all the history, all the laws, all the government, language, and existing structure, they want gone.
And that's the danger of how multiculturalism is presented.  And its evils are becoming apparent to even the dullest, most glassy-eyed supporter.  The problem is, that dullness is blinding them to the clear problem and they instead are looking at individual, isolated cases as if they are unrelated or not part of a blatant pattern.

These colonies are a serious problem that the left does not want to address because they were counting on them to win power.  But what they thought would help them gain power is becoming the power in their lands.  And now, belatedly, and confusedly, the left is becoming horrified at their demonic stepchild.

For more thoughts on the cultural suicide of the left, check out this piece by Colin Liddell.
Posted by Christopher R Taylor at 11:54 AM

I grew up in Dearborn, Michigan and I could relay more horrifying stories than one could stand to read over a cup of coffee. As a blue-eyed, blond irish american hottie you can only imagine the harassment I encountered multiple times daily from the pricks. I won't make you suffer the stories.

The cancer spreads quickly; When I entered kindergarten in '71-'72 there was one muslim girl by the time I graduated in '84 I would guess 50-60% of my class was arab. Today - and this is a verifiable fact through wikipedia - Fordson High School, my alma mater, has a muslim population over 97% (that was posted a while back and I'm guessing 100% probs.

In 2010 I met up for dinner with an Arab school mate. She was 1st generation American-born (although most of her older sibs were not), her husband was born and raised in Dubai, he is a printer, good guy. They are both fully assimilated non-practicing muzzies who have moved out of the "ghetto". He pointed out something to me I never considered. He said he hated going to Dearborn because the muslims there were "villagers". What he meant, and I could see this man, with his cosmopolitan upbringing, was right, is that the most of the colonialists-muzzies were not from the cities, Beirut, Damascus, Ryada, but from the villages where they were luck if they had running water. They freakin' immigrated to a suburb that borders Detroit!

I could write forever on the subject, but I won't.

My point is this colonialism and country-meets-city mentality merits some discussion.