"This will only lead to trouble." 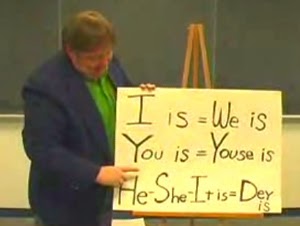 I have a simple question I'd like to ask.  I don't mean to be offensive, and I'm asking with genuine curiosity, not mockery or to start a fight.  I honestly, really want to know.
The question is this: my African American/black/etc fellow Americans, why don't you speak like the rest of us?
I know you can, because every black person I know of has an official American voice they speak with, even if they shift to a race-based dialect at other times.  There's nothing stopping you.
See, I ask this because every other country on earth, everywhere, black people speak like everyone else around them.  If you find a black Frenchman, he sounds like every other Frenchman around him.  Ditto in Germany, Japan, Finland, England, Canada, Mexico.   Everywhere, except America.
You can't blame slavery, because all of these nations had slavery in their past.  England had slavery up until less than a generation before the US ended it as an institution.  And slavery in America ended more than 3 generations ago.
Not everyone in a given country talks exactly the same.  Someone from Texas tends to sound different than, say, Idaho.  And its true everywhere - in London you'll hear 10 different accents depending on what part of the city you're in.
But here's the thing.  A black guy from Seven Dials sounds just like the white people, and the Indian people, and everyone else from Seven Dials.  I know why my friend Sarah has a Mexican accent, because she's from Mexico.  You're not from another country.  I didn't mind when my friend Martin from Sierra Leone had an accent, he was from Africa.  You were born here.  Your parents were born here.  Their parents were born here.
So what's up?  Why is it more "authentic" to bust out this "ebonics?"  Why can't you talk like everyone else, all the time?
I know you're aware this hurts you in official and important situations, because it goes away when you interview for a job or talk to an authority figure.  What's up?
Posted by Christopher R Taylor at 12:43 PM