RETRO WATN: The Wisdom of Elders

This is from a while back, in 2010. I keep almost writing this piece again because I keep running into the same myth: that its hypocrisy to teach your children to be better than yourself and avoid your mistakes and youthful foolishness.  Then I remember I already wrote it. 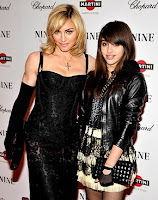 Some fun has been had at the expense of pop singer Madonna lately based on her US Magazine interview. In it she said about her daughter Lourdes:


"If anything, I wish she'd dress more conservatively, How's that for irony?"

This coming from a woman who spent her career as a nude model, dressing provocatively, pushing sex, and engaging in various racy and provocative acts to promote her career is a bit much for many people to swallow.

It is true that of any woman alive, Madonna probably has the least room to talk about how someone should dress more conservatively and be less visually provocative, what with her cone bras and faux lesbian kisses and so on. And she still promotes her image as a sexual creature, despite her advanced age, trying to look as physically attractive - and young - as possible.

Despite the fat target for accusations, of hypocrisy I have a different approach to this. One of the more difficult things to teach young people is wisdom, because it is very difficult to learn without time and experience. Wisdom most often is the aggregated lifetime of experiences, failures, mistakes, and pain which teaches that which few other things can. Gaining wisdom is a treasure beyond anything monetary, yet it is even more difficult to achieve than a fortune.

Telling young people not to do certain things can be difficult because sometimes the warnings cannot be given with tangible, rational explanation. For example, telling people to not eat crappy food can be very difficult to explain why. Young people can eat pretty much anything with almost no ill effect - what they don't understand is that the habits learned through this and the incremental damage done over time that causes trouble later. Other things like "act like a lady" or "read a book" are even harder to impress upon youth.

Older people have done things and gone through things which have taught them what may otherwise be impossible or at least very difficult to learn. They want to impart that wisdom and experience and spare younger people those pains.

When a parent smokes pot and finds out what a bad idea that was, them telling their kids not to smoke pot doesn't make them a hypocrite, it makes them wise. They've done something bad or self destructive and want to spare their kids that experience. Its like the fool who was badly burned telling other fools not to stick their hand in the fire. That's not hypocrisy or being mean to the others, it is sharing wisdom learned through pain that you'd spare them from going through.

In a culture where maturity, age, and experience is treated with reverence and honor, children are brought up to be more willing to take older people at their word. When the revered elder says "don't dress like a trashy slut" in such a culture, then the girls are more willing to listen and obey. In such a culture, then tradition can take on a power and significance it ought not - with tradition overwriting logic and reason, not to mention change - but rejecting tradition and the wisdom of elders has its own cost and dangers as well.

With the 1960s and the hippie revolution, young people rejected trusting elders and tradition completely and determined that history would teach them nothing. With this rejection came a series of foolish mistakes which are repeated over and over because the young are taught to reject the old, and the old are taught that youth is superior and they are obsolete and irrelevant. The results are not hard to see all around us.


Yet those youth grow up eventually and find out in time the things their parents wanted them to learn without the painful experience of failure and difficulty. They did things they ought not to have done, found out from personal experience why, and now understand what they rejected or ignored in the past. Madonna lived a trashy, slutty life (and to some degree still tries to), but she wants her daughter to not be as she was. This could be called hypocrisy - especially since she hasn't changed much - but it also could be called wisdom. There's a reason most older people tend to become more conservative, and it isn't fear or obsolescence, nor even clinging to a mythical golden past. Its experience and wisdom.

The older you get, the more you understand how well-seeming and idealistic schemes are not what they seem to be. You learn more about human nature, about consequences, about long-term effects, and about why some things will not work. You see the failures of past schemes and experience the disaster an idea you had resulted in. So you move away from the childish things of youth and grow older and wiser, maturing intellectually as well as physically. Usually. Some never do - typically those surrounded by leftist thought and input, isolated from the world and its consequences, and continually reinforced by like thinkers. Others fear change or reversing their positions even when they know they are wrong, or want what they believed to be true so badly they are willing to suspend reason to cling to it.

Madonna's past taught her what a bad idea it is for a young girl to dress and act like she did. Social conservatives share this outlook - often from personal experience, but not always. Many rely on older, wiser people from the past who know not trends and cultural shifts, but ancient, millennia-old truths and realities about ethics and the human soul which are true regardless of technology and culture. The things which seem so restrictive and cruel (no abortion, no promiscuous sex, lay off drugs, chastity, reverence, care in speech and thought, etc) in the end are a source of liberation, not because of greater overall freedom but because of the better life for everyone as a whole that results.

The Bodhisattva told Buddha that he had a great thing, that he was ultimately right... but that he personally wouldn't be following those tenets until everyone else did, because it was so personally costly. Sure, rejecting greed and comfort and personal ambition at the cost of others is very fine, but only once there isn't someone else to stomp all over you when you give it up. Living a life of virtue and ethical purity is very costly for most people. You tend to lose to the people who cheat, who steal, who crush others, and who care for nothing but themselves. You are passed up for promotions, you are outsold by other people, you lose your love to a sleazy lothario - or because she wanted you to be more sleazy. In a thousand ways you pay a price for living a better life, which causes a great deal of pain and self questioning.

Buddha's answer was to treat life as an illusion and shrug at hardship because ultimately none of it was real. But the truth is, real life is real, and everyone sane deep down knows this. We aren't spirits drifting around as part of some greater universal consciousness, we are real physical creatures and life hurts. The easy answer to this is to stop trying to do what is right, to stop fighting and give in, to be like the others who seem so happy and successful. Girls like guys who treat them like trash, I'll be one of those guys. Brad got two promotions and a huge salary by being a lying, backstabbing sleaze, OK I can do that too. LaQueesha dresses like a prostitute and has the hottest, richest guys all over her all the time buying her stuff, well I can slut it up as good as her.

Wisdom, however, teaches us that there is a better way. That the pains we experience for being good are nothing compared to the ultimate pains of a life lived less virtuously. Few are the people who die old and wicked who are glad they did. Typically such people have deep regrets, and almost always they express them. In raw practical terms, being used like a piece of meat for each man's pleasure in exchange for status and gifts ends up making a woman feel incredibly awful and cheap, and can result in lethal, disfiguring diseases. In raw practical terms, you can get away with ripping off customers and stabbing people in the back in business for a while, but eventually the customers figure out your products are lousy, your prices are too high, and nobody will deal with you any longer except the IRS and the FEC.

A more humble, virtuous life may cost you many of the things and status you desire in youth, but in your old age you'll not care so much about those things and avoid the regrets, consequences, and shame which getting all those things can so often cost you. And there's more to this world than is dreamt of in your philosophies, Horatio. There's a life beyond this one which has far greater significance and reality than we can now possibly imagine. C.S. Lewis in The Great Divorce tried to express that with grass blades so hard and sharp they cut people from this world who tried to walk on them. They were so much more real than our life that they were like knives. The future holds more than old age and money, and how you face that future is more important than how happy you are now.

Its just not easy to get people to understand that, often, until its too late.
Posted by Christopher R Taylor at 10:20 AM