"I rent boats and do anything else that goes with a weak will and a strong stomach." 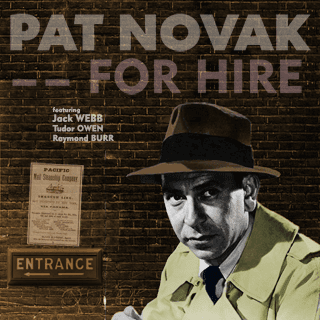 Before Dragnet, before everyone knew him, Jack Webb did several other radio shows.  The best of them was called Pat Novak for Hire, about a boat owner and general odd jobs guy who kept getting involved in various pulpy adventures.
What set this show apart was the writing, which was noire hard boiled writing at its absolute best.  The primary writer Richard L. Breen who went on to write such films as State Fair, Niagra, and PT 109.  And his work was poetry.  The interaction between Novak and his nemesis on the police force Lieutanant Hellman is classic and usually hilarious, and the philosophical monologues and musings of drunken ex-doctor Jocko Madigan is unique to the show.
So not feeling really on top of my game I'm going to give you some quotes from the show's all-too-brief 1946-47 run.
Every show starts with a grim and often bitter intro by Pat Novak about how hardcore his life and the world he moves through is.  This is San Francisco back before the hippies, the toughest place in America and one of the roughest places in the world.

"Around here a set of morals won't cause any more stir than Mother's Day in an orphanage. Maybe that's not good, but that's the way it is. And it wouldn't do any good to build a church down here, because some guy would muscle in and start cutting the wine with wood alcohol. All you can do is try to make the books balance, and the easiest way to do that is to keep one hand on your billfold and the other hand on somebody else's."
"Down in the waterfront, in San Francisco, you always bite off more than you can chew. It's tough on your windpipe, but you don't go hungry."
"Pat Novak, for hire. It's about the only way you can say it. Oh, you can dress it up and tell how many shopping days there are 'til Christmas, but if you got yourself on the market, you can't waste time talking. You got to be as brief as a pauper's will, because down in the waterfront, in San Francisco, everybody wants a piece of the cake, and the only easy buck is the one you just spent. Oh, it's a good life. If you work real hard and study a little on the side, you got a trade by the time you get to prison."

Almost all of these are worth listening to and as hardboiled as a fifteen year egg.
Then there were the descriptions.

"He stood at the door for a minute, and then he walked out. You got a funny feeling that he didn't walk into the night, that he was big enough to wrap it around his shoulders and take it with him."
"I watched her as she turned and walked out the door. She was wearing a flowered print dress, and as she walked, the roses kept getting mixed up with the daisies. She walked with a nice friendly movement, like the trap door on a gallows."
"Hellmann rolled him out onto the linoleum--a dapper little guy, except for a piece of cord around his throat, tied in a funny knot. He was deader than a broken drum. Somebody had pulled too hard on that piece of cord. The veins were standing out in his forehead, and his face looked like a roadmap lying around there on the floor."
"The reception committee didn't help much. They were sharks in dark, all three of them, with rolls of loose oily fat where there necks should have been, and small pig eyes that squinted through the cigar smoke rolling out of wide nostrils."
"He was about the size of a golf bag with arms. If he had a cigar box, he could see over a pool table."

And then there were the moments, where Pat Novak had to say something for the audience when he really didn't want to.

"He slipped out of my arms and stopped paying taxes."
"He couldn't have made it with a prayer book in both hands. He slid down to the floor and trembled for a moment and then flattened out like a leaf in a pool of water. Just before he died, he grabbed his side, as if he didn't like the way it hurt, and then he didn't care. I rolled him on his back and let him look at the ceiling. His eyes were open, and he looked surprised, like a guy who didn't figure on a change in the weather. There was a scar that ran across his forehead and dug deep into his hairline. And he was lying there with a bunch of pink gum showing, as if he was trying to pick up a few bucks with a toothpaste ad."

Novak wasn't fond of Hellman, despite the fact that the Inspector wasn't such a bad guy.  After a few episodes you notice that he's smarter than he seems, and uses Novak to solve his cases.

"I crossed over and knocked at the door. The guy that opened it had a face like three pounds of warm putty. It was moist and pink, and you got the idea they put the color in with a spray gun. And if his heart was made of the same stuff, they drained the oil out first."
"Hellmann, you ought to rent an idiot. The heavy thinking's too much for you."
"You couldn't strike oil in a filling station."
"I can't wait that long, Hellmann. You couldn't find a tractor on the back porch. I'd hang if I waited for your boys."
"He was a tough, hard cop, with a heart big enough to hide behind a piece of birdseed."

Here's a sample exchange between them; Imagine Hellman's voice as read by Raymond Burr, because that's who played him. And he played him plenty tough.


Novak: There's a gal up there, but that's all.
Hellman: Does she wear suspenders?
Novak: What?
Hellman: Then take my word, it's a man.
Novak: And you're gonna tell me he's dead, Hellmann.
Hellman: No, I'm not gonna tell you he's dead, Novak. He may be a soft breather.

And then there just were the lines, like poetry written in bullets, with a wreath of cigarette smoke around them.

"Father, you better be on call when I catch up to the guy. He's gonna have a lot of praying to do."
"For some reason, I felt like a man in quicksand complaining about his height."
"His head was over to one side, and his body was twisted over the other away, as if he couldn't make up his mind which direction to die in."
"I tried to follow the conversation, but it was like trying to put a smoke ring in your pocket."
"I didn't have any leads. There wasn't anything I could do but sit on my hands. It was like taking your niece to a nightclub."

If you want to listen to some shows, there are a few on Youtube, and most of the broadcast run on various Old time Radio sites such as Dumb.com.  Here's one show on Youtube to enjoy:

I always liked the way Jocko called him "Patsy."

It's too bad it was a short series. But then again, that's probably what made it special.