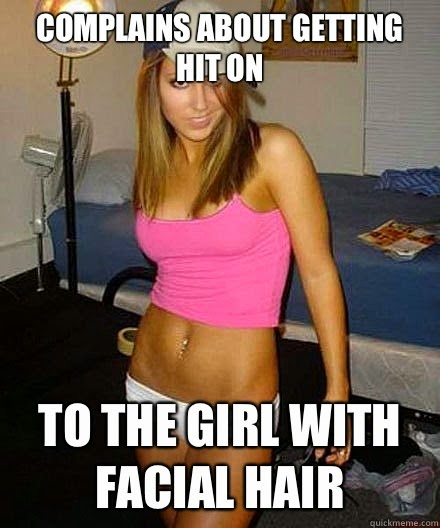 I don't hit on girls, not in public or in private.  I never have, I'm not a flirt, I'm not aggressive or even timid with women.  I'm distantly respectful and if necessary friendly and polite.  I try to treat women all the same no matter who they are, and figure the really pretty ones get tired of guys hitting on them anyway.
A Left leaning activist group called Hollaback put out a video that got 15 million hits in one week on YouTube.  The video is of a woman walking through New York City and being hit on by guys.  She's young, attractive, and has large breasts, wearing tight clothes, and in ten hours of filming she got hit on by just over 100 guys in a city with just over eight million people living in it.
If it sounds like I'm downplaying the awful experiences this woman is supposed to have suffered, its because I am.  In ten hours of work they only caught a handful of really offensive or rude comments, in a gigantic city packed with people.
And many women would consider this not so bad, since they like having attention from men and often dress just to attain such attention.  Its perhaps uncharitable and unfeeling, but the old saw goes: its flirting if he's handsome and rich, its sexual harassment if he's not.  Many of these guys aren't being offensive at all, just trying to draw her attention; attention she'd likely welcome from a really good looking, wealthy fellow.
I wouldn't care for the comments, and like to disappear in a crowd but then I am more of an introvert, too.  The thing is, she walked around for half a day in order to record these comments and despite being an attempt to portray the alleged misery of attractive, stacked girls having to deal with guys hitting on them, its not being hailed as a great effort by the left.
Why?  Because almost exclusively the guys hitting on her are Puerto Rican, black and other minorities.  And that drove the offense takers off the rails.  Charles C.W. Cooke writes:

“The fact that the video chooses to showcase the experience of a white woman experiencing harassment almost exclusively at the hands of black and Latino men,” Brooklyn Magazine’s Kristin Iverson proposed earlier this week, “is a pretty clear indication of who the audience for this video is supposed to be, namely, those who seek to protect and defend innocent white women, aka the already existing societal power structure.” This theme was picked up in more explicit terms elsewhere, the less direct references to the “power structure” quickly giving way to overt accusations of white supremacy. “Thousands of satisfied racists are sharing that viral catcalling video,” griped Lindy West at the Daily Dot, lamenting that its creators had imposed “manipulative, specific, politicized constraints on the issue of street harassment” and thereby permitted “the bulk of the audience to divorce themselves from the problem.” Yesterday, the Root’s Dion Rabouin dispensed with euphemism entirely, confirming that “some of the video’s intentional choices seem to play on the Birth of a Nation trope that white women simply aren’t safe from sex-crazed black and brown men.”

The problem is that women are lower on the leftist identity politics scale than blacks.  So the proposed travails of the woman in this video are lower than the perceived attack on a more protected identity group, and off we go.
The thing is, the group went all through NYC, according to their statement.  They filmed all across the city and this is who hit on her.  They filmed for 10 hours in all sorts of neighborhoods and boroughs.  This isn't unrepresentative, its exactly representative.
Some writers suggested that these men hit on her because white oppression compelled them to “This kind of harassment can be a way marginalized groups talk back to the white gentrifiers taking over their neighborhoods.”  In other words: the bitch had it coming.
Another demanded it be redone with a transexual black, for "universalization."  Yeah send RuPaul out there and see the reactions.
At least one feminist declared that this could be "the last straw" for a girl, unable to bear up under the strain of male attraction and interest.  Tiffany Jenkins writes:

Speak for yourself, Kate. This is the sort of thing that was said about women in the past to keep them in their place: that they are too fragile, sensitive and weak for the workplace, or for the political sphere, that they may faint at any moment, that they need a chaperone. Give your sisters a break. We are stronger than you think. We can tell guys to “back off”. And it is incredible that it’s necessary to make these points in the 21st century.

Frustrated with the combined approach of victimization ("we're weak!") and oppressive censorship, Miss Jenkins announces that she's trashed her feminist card and wants nothing to do with the modern movement.
Its interesting how the video producers presented this, they said "she's not wearing provocative clothing or responding to guys" so its all on them.  But she's not exactly wearing super modest clothes either: 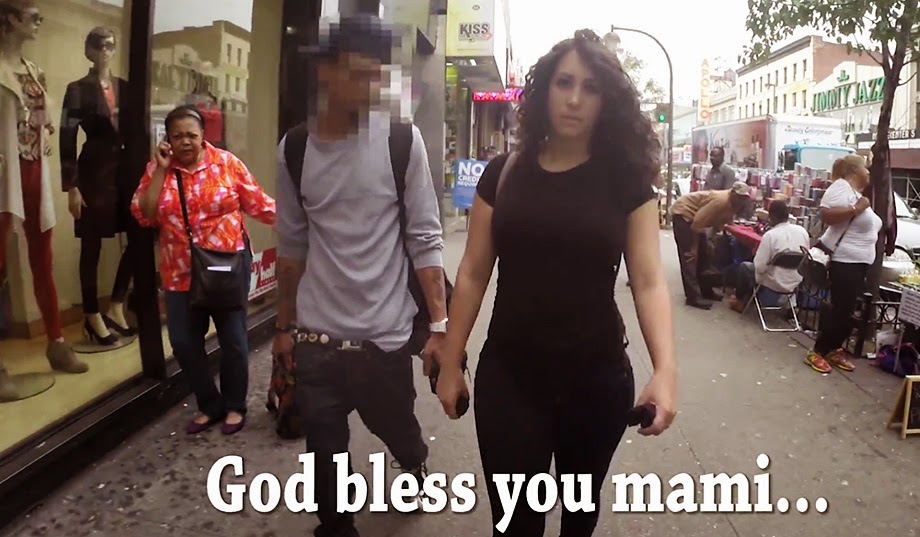 And it would be interesting and more useful for them to show what happens when a girl who dresses more modestly or covers up does the same thing, or even a less attractive, or older woman.  See the point isn't "she has it coming, the slut" but rather "she's getting what she advertises for."
I understand that's a subtle difference, but it works the same way for anything.  If you wear a Red Sox jacket and hat in New York City, you'll get a different reaction than if you wear Yankees gear.  The point is that people will respond to you in part based on your apparel and appearance.  And the picked and dressed a girl in a manner that's going to attract guys.
Its true she's not dressed like a Times Square hooker, and that's a good thing, but she's not exactly dressed in a manner designed to keep guys from hitting on her, either.  And it would have been informative and useful to show the difference - if any - based on how she was clothed.
Of course the legion of perpetually offended found offense at the creators for saying she deliberately was not provocative:

In other words: no matter how you do it, you did it wrong.  The obvious conclusion that, maybe, some women are dressing and acting in a manner that invites and requests reactions from men is simply dismissed before the discussion begins, a priori.  Women can act and dress any way they wish and men cannot respond any way except how the woman wants them to, at that moment, or they're wrong, brutes, sexist oppressors.
The man wearing the pack with the disguised camera ahead of her was the target of shaming as well:

“It is made clear that Roberts has a boyfriend who is filming her because he too wants to protect her from . . . whom exactly? Oh, multitudes of anonymous black and Latino men? How gallant of him. How evocative of countless other examples of men wanting to protect the safety of white women.”

Again, the behavior of the people involved is not the problem, its the problem of you for noticing.  These are protected identity groups they cannot be wrong, so the white guy in the mix must be ultimately to blame.
And behind it all, this video was put out by a group whose purpose was to try to get support for a law criminalizing catcalling and hitting on women in public.  The group is called Hollaback and their mission statement includes the words "most pervasive forms of gender-based violence and one of the least legislated against."  Violence.  Hitting on a hot girl is violent, according to this group, and should have the full penalty of law to stop it.
Now, to me, it just seems like people should not be rude.  I have to ask these guys has this ever worked for you?  Did any of the women you yell at and hit on stop, walk up to you, and give you their phone number or start flirting with you?  Does this behavior ever, ever succeed?  Because I'm highly skeptical unless she was an actual working girl.  You know, a real hooker.
It just doesn't hurt anyone to be polite, considerate, and respectful to everyone, even really hot women.  And I suspect, but don't have hard evidence, that this is a lesson white guys for the most part have learned.  In fact, I can't find it but I read a piece not long ago where a woman was lamenting that guys have learned this lesson and she kind of missed being hit on by construction workers.  Ya just can't win.
But if this video shows that culturally, blacks and hispanics are more likely to hit on a woman than white guys, maybe that's not an oppressive racist hit on these guys, but a cultural nod to whites?  Or is that simply so inconcievable?
Yeah I know.  It is inconceivable, or at least not allowed into the leftist worldview.
Posted by Christopher R Taylor at 7:58 AM