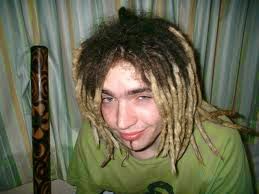 Voters in Oregon have passed a legalized marijuana law.  It really was just a matter of time, given that pot is one of the state's largest cash crops (off the books) and the general trend of society.  The actual legalization doesn't take place until next year, but people are already celebrating by smoking since the state's attorney general has announced they won't be busting anyone for weed that's legal under the upcoming law.
The biggest reason for the shift is that Colorado made huge tax dollars off of pot sales (although I strongly suspect that will taper off dramatically over time), but years of weed being popularized and used publicly without any consequence played their part as well.
When I was in school, drugs were looked down on as being used by losers.  Weed was the stuff your annoying trashy older brother and sister used, the old hippies you wish would just go away.  It was in the 90s that rappers brought it back into the public eye as being "cool" again, and after a while it seemed police just didn't care if you had a few joints on you, unless they really needed a reason to pick you up.
I'm conflicted on this one.  On one hand, doing stupid stuff to yourself has to be permitted in a free society and the federal drug laws are unconstitutional (the constitution gives no power to the federal government to regulate drugs within state borders).  On the other hand, smoking pot is bad not just to the person involved but to others around them.
Cops are very opposed to legalizing any drugs because they have a hard enough time handling drunk drivers without making more stoned drivers hit the road.  As I wrote about a while back, pot actually can make you a bad driver, but unlike alcohol, there is no useable, reliable field sobriety test for weed.  Stinking of bale isn't enough of an indication.  And it really does stink.
And there's a deleterious effect on productivity for most users.  As the ZMan writes:

I’m OK with the repairman sucking on a cancer stick while he repairs the lift. Nicotine helps concentration. The same repairman doing bong hits before working on the lift is probably about to kill a bunch of people. Of course, he probably called out of work so he can play video games and eat chips all day, but that’s another story.

The thing is, it varies.  Chemicals never affect two different people the exact same way.  In fact, they can vary from day to day on the same person.  Both marijuana and alcohol are depressants, but we all know at least one person that gets more violent and aggressive while drunk.  Certainly reducing inhibitions in some people is a very bad idea.  We've seen example after example of mass shooters and serial killers being pot users and that's no coincidence.
So pot won't necessarily result in someone doing poor, sloppy, inattentive, or sluggish work.  It probably will, because that's its typical effect on human beings, and almost certainly will with the great majority of people, but it won't always.
Smoking pot is a stupid, stupid thing to do.  Its a very nasty carcinogen and its bad for your brain, as studies have shown conclusively.  It tends to make you more lazy and less productive, effectively removing you from being a useful member of society, particularly as while every pot smoker claims they can control it and only use it once in a while, its rare that is true.
But at the same time, being no benefit to society is not a punishable negative.  its not something society should take action against.  Certainly its not something that society should take an effort to assist in or compensate for: if you are too worthless and stoned to get a job, I don't think anyone else should be compelled to pay for your rent or even food.
But liberty has to include the freedom to do stupid self destructive stuff.  If you want to eat lousy food, or too much, or smoke, or skydive, or jam metal spikes through your skin or distort and stain your skin by being stabbed thousands of times with dyed needles, that's your problem.
What the long-term effects of legal pot will be is anybody's guess.  I can see it being overall a negative, but how much of one is unclear.  Its likely that the more states that make weed legal, the less tourism countries like the Netherlands will get - and not propping up their ridiculous economic system will only benefit the world by showing how untenable it is.
One of the great myths of legal drugs is that it will reduce drug-related crime.  But drug-related crimes are generally caused by people who need their drug and will break the law to feed that need.  And the more someone is under the control of a drug, the less under control of themselves they are - and the less productive and likely they are to have money to pay for drugs.  So more people using drugs means a greater likelihood of drug related crime, not less.  Especially as government shops overcharge grossly, encouraging smuggling and illegal sales that legalization was supposed to end.
The problem is that legal pot changes a lot of things that aren't immediately obvious.  Businesses need to add pot to their rules and guides just like alcohol.  You can't come to work drunk and expect to keep your job - you can't come to work stoned, either.  Even a little buzz will annoy employers.
And its not just businesses.  Seattle University recently suspended students for selling pot brownies on campus.  Now I always understood that marijuana tasted awful, but apparently there are ways to cook it that reduce that nasty flavor.  But the problem is, these "medical" brownies were being sold all over campus, and its not permissible in the college to sell drugs of any kind.
Plus, colleges and universities rely on significant amounts of federal funding and eligibility for grants and other student financing.  By violating federal drug laws, they risk losing that all and money is truly the bottom line for these organizations.
And this is what it comes down to right now: just because its legal, doesn't mean you ought to be doing it.  You can legally strip naked but that doesn't mean you can do so in the line at McDonald's.  Its a matter of when and where, of learning limits and boundaries.
But in the modern era, the concept of "appropriate" is considered a horrible tyranny and some brutal oppression.  And societal limits are seen not as a structure to maintain a polite coherent culture, but targets to rip down and mock.  So a change like this, which might have found out its reasonable limits in time decades past now is likely to be very a real problem.
We'll see how it turns out over time.  But I'm not sanguine.
Posted by Christopher R Taylor at 9:59 AM

Another thing that is rarely mentioned in the legalization debate is that pot grows practically anywhere. There is a reason it is called "weed". With alcohol, tobacco, and any other heavily regulated (legal but bad for you) substance there is a significant hurdle to making your own and that keeps the "shadow economy" supply down. Pot can be grown easily and once harvested there is no good way to distinguish it from legally produced weed.

That is quite true. I have literally seen plants growing alongside the roads in Oregon here. its quite easy to spot.

because of the fat soluble qualities of those cannabinols, marijuana residues store within the body fat and within the organs like the brain, sex glands (testicles & ovaries), spleen, liver and lungs . These toxins produce chemical imbalances, nutrient depletion and cravings for the drug years later.If you want to read more about Cannabis Stores then click here to continue.