PRODUCTS OF YOUR IMAGINATION

"They're playing the most phenomenal game ever created!"


One of the things that concerns me as a gamer - the real thing, not the "I play video games dude" kind - is that role playing games are on the decline as a hobby.  People are playing video games that label themselves "RPG" instead of the ones that require pen and paper and other people around.
Don't get me wrong, I like World of Warcraft and Star Wars: the Old Republic and so on.  They are fun and can connect you with other players.  And they are (nearly) always available, so you can play without waiting for other people.
But they aren't the same as getting your dice out and sitting down with friends to play a game.  And some think that RPG manufacturers need to advertise more.  Which brings us to this, a display of the old ads that TSR ran for their products. I'm not convinced they were very effective.
First this ugly paste job: 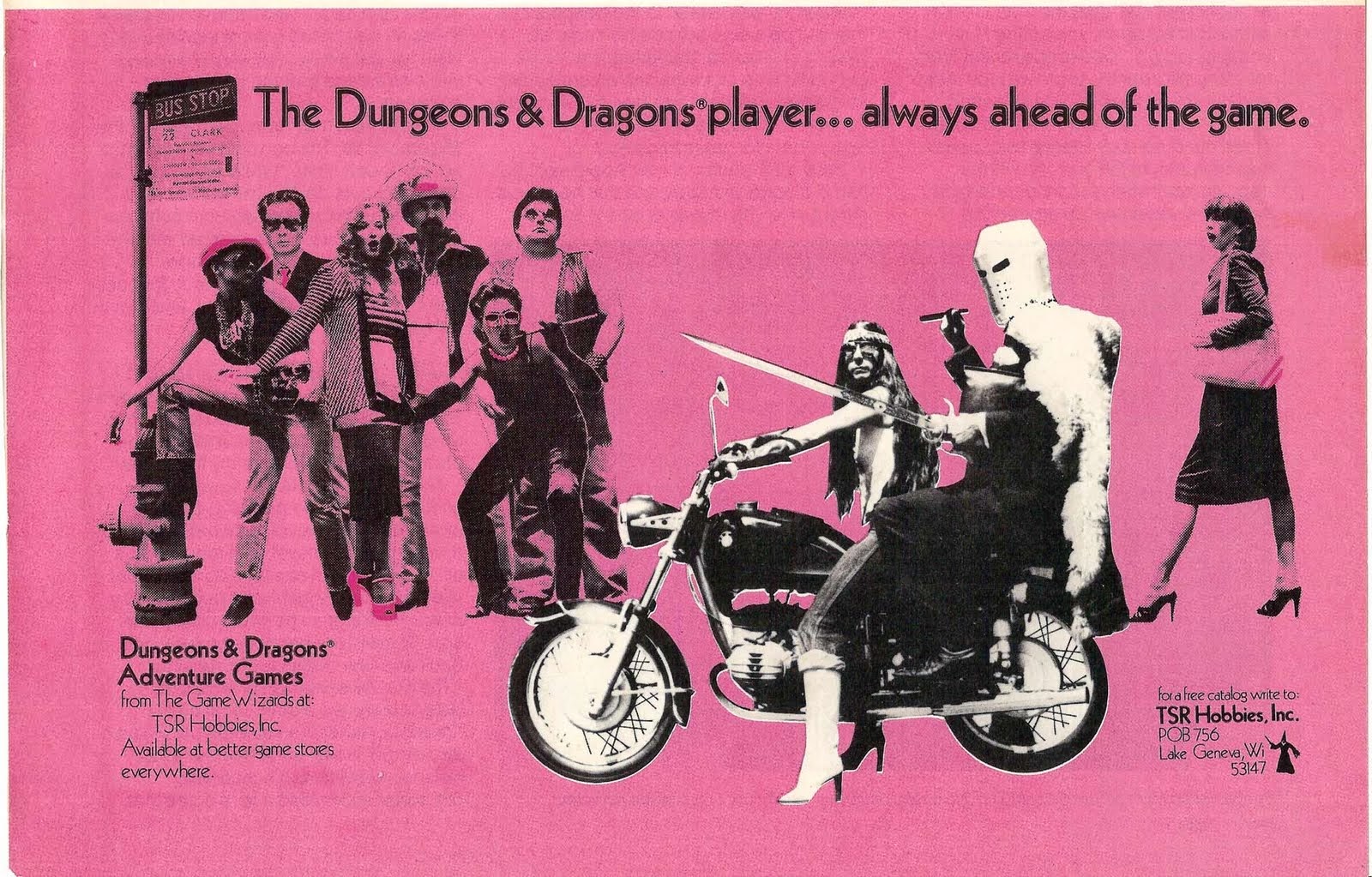 It doesn't get much more cheap and clumsy.  I kind of get what they are trying to say here, but it just doesn't work.  And why is the knight riding bitch and smoking a cigar?
Then there's this hideous thing.  I guess they were going for some kind of Peter Max op art thing but its just horrible looking: 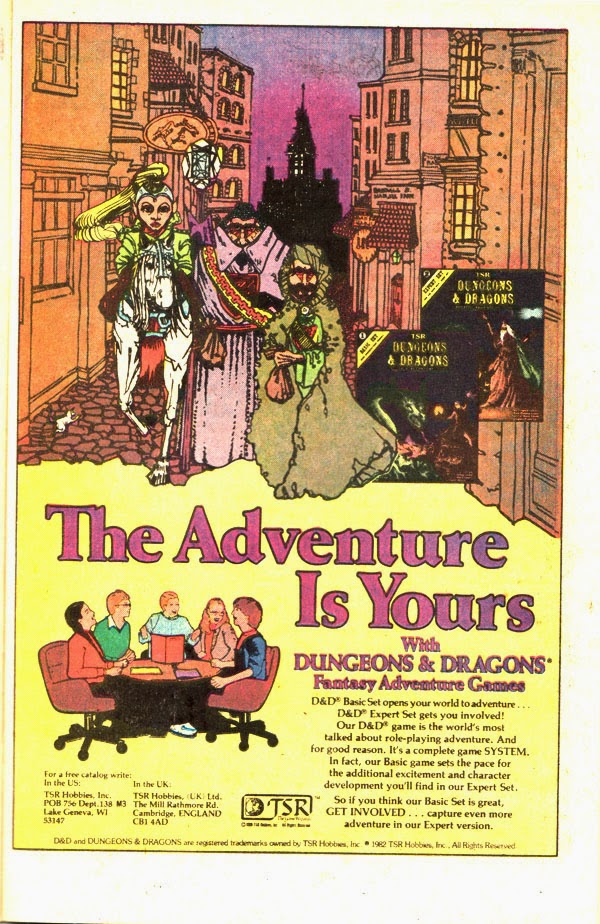 I remember seeing that ad and the art always struck me as just being terrible looking.  They should have sprung for some David Trampier art instead of having someone's 9 year old sketch it.  The next ads are better, if a bit confusing: 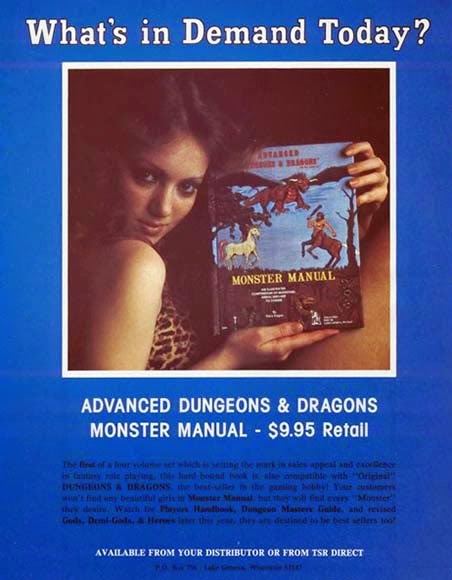 They ran a couple ads with this girl, who I think is E. Gary Gygax' wife Elise (update, Elise is Gygax' daughter, so maybe her?): 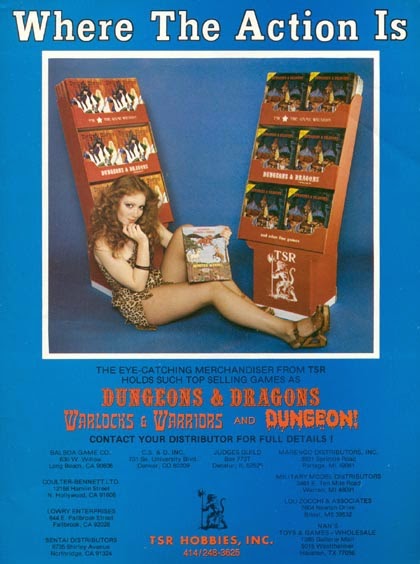 I guess they were trying to make D&D sexy.  I don't even remember what Warlocks & Warriors was, I am not sure I ever saw it.  None of the girls I ever gamed with looked like that.  Finally we get to a bit more basic ad, run in gaming magazines: 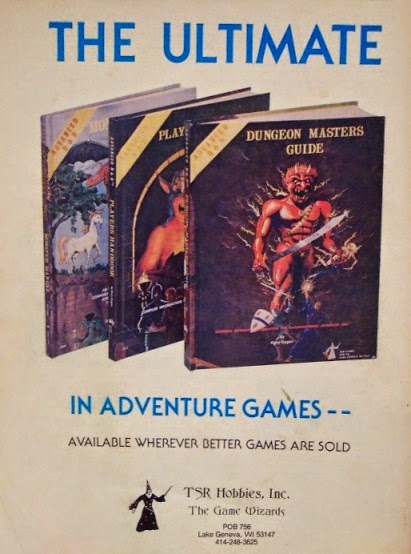 But TSR also sprung for some TV spots, especially during the time in the 80s when the D&D cartoon was running.  This was their high water mark, when they were doing quite well, and the ad isn't terrible:


They even got vet announcer Ken Nordine to do the voice over, he of a zillion voice overs and movie trailers.  He's one of those voices you  know but never had a name for.  The girls are cute and the guys look like dorks, and there's some of the animated series footage in it.  Its too bad the girl looks like you told her she won the lottery for a date with Sean Cassidy, she's a bit too dumbstruck and amazed for what's being described.
But that brunette?  A very young Jami Gertz, who went on to several films such as Less Than Zero.  I doubt she ever touched a polyhedral die in real life.
I'm skeptical these ads really brought in very many customers, but they did probably help establish the brand in people's minds and the tagline "Products of your Imagination" is a really good one.  They should have stuck with that because it works really well.
Finally we have this ad, which I doubt convinced even the most die hard D&D fan. 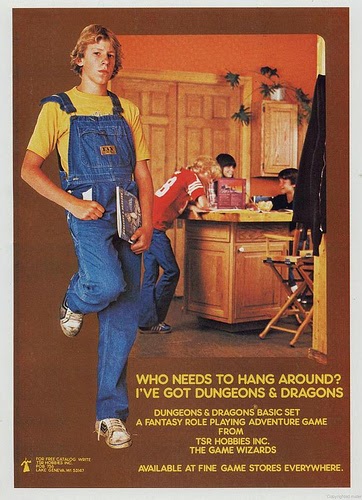 Yeah, that's a pretty typical 80s D&D player but does that sell your game?  Notice everyone playing these in all the games is always quite young, so you can tell who they were aiming at as customers.  But these days most players are in their 30s or older, because younger kids are playing collectible card games and computer stuff.
Probably more ads would be good, and these days they could be pretty astonishing in visual appeal, but they would be more about creating a mental image and association than sales, I suspect.  What I'd do is run a series of ads with gamers who are famous such as Joss Whedon, Vin Diesel, Jason Alexander, Patton Oswald, Mike Myers, Robin Williams with Billy Crystal, Stephen Colbert, Kevin Smith, Ben Affleck and Matt Damon, Matt Groening, Eddie Izzard, Trey Parker, Matt Stone, Stephen King, Jack Black, David Duchovney, Will Wheaton, and actually many others.
The fact that so many comedians and actors are into D&D shouldn't surprise anyone; its a game that requires imagination and improvisation, and a lot of the modern crop of stars were kids when D&D was really popular.  Throwing them into the ads and having them giving little anecdotes while showing D&D products, playing, and scenes of action behind them could be pretty effective.
Posted by Christopher R Taylor at 9:00 AM

I remember that TV commercial with Jami Gertz! I do think that ad was pivotal in my being interested in D&D, along with the D&D serialized cartoon, which was arguably the best thing on Saturday mornings during its run.

I also remember the "The Adventure Is Yours" ad in some comic books. That artwork look horrible now, but at the time I remember it was very similar to the artwork in the Steve Jackson 'Sorcery!" adventure books. I bet it was the same artist.

I was always very interested in gaming when I was a teenager, but had a hard time finding a group due to our being in a rural area where D&D had run afoul of the religious teaching in the homes of most of my friends. I had one friend whose mom quit letting him come over to our house simply because I let him borrow my Players Handbook to study.

I think I had all the D&D "choose your own adventure" style books, but that was the limit of most of my RPG experience. Other than some fumbling and misguided attempts with friends, I was never really able to get a solid campaign going. I tried again in adulthood with some co-workers, but they were into Vampire: The Masquerade and it really wasn't my thing.

That's interesting. It's not my area -- kind of like golf. My brother-in-law who was a professor of, I guess, Dramatic Arts or whatever, enjoyed D&D. He tried to get me involved. It sounded like fun for people with the right mind-set. I'm not surprised to learn RPGs are popular with entertainers. Makes sense.