"Qualified minorities who performed well on an intelligence or aptitude test and would have been offered a job directly 30 or 40 years ago are now compelled to attend a college or university for four years and incur significant costs."

You've probably heard of some US Supreme Court cases that have had a significant impact on our lives, and ones that were just awful (Roe vs Wade, Dred Scott v. Sandford, Kelo v. City of New London).  The courts can have immense effect on culture, law, policy, and economics often without meaning to.
Like ripples spreading on a pond, as George Will notes in a column a few years back, a decision can have wide reaching consequences far beyond what was intended or understood at the time.  In theory, justices are to have the wisdom to understand this kind of thing, but they don't always, and sometimes are blinded by their personal viewpoints.
One case you've likely never heard of is Griggs vs Duke Power Company, decided in 1971 in the Warren court.  The backstory is basically this: Duke Power Company required any employee who wanted a promotion beyond a certain point to have a high school diploma and to pass an aptitude test.  Willie Griggs decided the test was racis' and sued along with a group of other black employees who were unable to pass the test and had no diploma.
Duke Power Company pointed out that they provided funding for people to get a GED and that white employees had failed to pass and were not given promotion as well, and courts agreed all along the line... until they got to Chief Justice Warren's leftist-packed Supreme Court.  I'll let Bill McMorris tell the tale:

The Supreme Court wasn’t buying it. This was North Carolina after all. The court compared the tests to Aesop’s fable of the Fox and the Stork, in which a fox offers a dish full of milk to a stork, whose beak prevents it from satisfying its thirst. The implication that black and white workers were of a different species did not strike any of the justices as racist, unlike the objective tests. Griggs found that if blacks failed to meet a standard at a higher rate than whites the standard itself was racist—a legal doctrine known as disparate impact.

That's right, the court ruled that requiring blacks to face the same challenges as other ethnic groups to achieve promotion was racist because... well apparently they thought blacks were somehow incapable of taking the tests, or were innately different as human beings.  Even the civil rights acts of the 1960s specifically stated that tests not designed to be racist or discriminatory were perfectly acceptable for employment standards, but the Supreme Court ordered congress to change that.
So now what were employers to do?  The tests worked - as McMorris points out businesses were just following the military's successes against "the two most efficient peoples known to man" in WW2 and decided they'd use the same system of aptitude testing to place and screen candidates.  It worked, while it was legally possible.
Without testing, businesses turned to colleges and universities to handle it for them.  They reasoned  about this court ruling that these institutions would weed out the less able in a field and pass the more able, so they could use diplomas.  "This is, of course, just one reason why college attendance increased from 5.8 million in 1970 to 17.5 million in 2005," as George Will wrote in 2009. 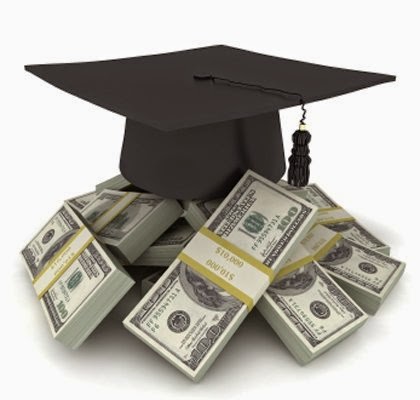 But it was basically free to take an aptitude test and get a high school diploma.  It costs more than a car to get a college degree.  So poor blacks, the very kind that the Griggs decision was supposed to help, are the very ones that now have a harder time getting and advancing in jobs.  In fact, the GI Bill resulted in only 1 of every 8 vets coming home going to college; the rest were able to use aptitude testing to get into jobs, something no longer possible.  Meanwhile education costs have gone up and up.
With more people pushed into the university system to get higher paying jobs, combined with massive government programs to help pay the bills, colleges and universities began raising their fees, costs, and rates.  Since Griggs was handed down, the average cost for a college education has gone up 440%, far more than the rate of inflation.
The Project on Student Debt showed that the average college student today takes out nearly $30,000 in debt, graduating into a job market with an unemployment rate around 20% for their age group.  Some point to a stat showing that unemployment for college graduates is just under 5%, but even during the worst of the Carter years, it was under 2%.
Ive written several times about why those costs have gone up and where that money is going (hint - nearly none of it to education), but with that supreme court decision, businesses have gone from individual testing to just letting colleges handle it.
In the process, colleges and universities changed how they promoted themselves, trying to get more people into their doors.  McMorris again:

By the late 1970s, universities were in crisis mode. The baby boom produced more students than they knew what to do with, but declining birth rates left them with a smaller pool of tuition-paying students. Their new role as the gateway to respectable careers and higher salaries solved that problem. They replaced comprehensive liberal arts education with career-oriented majors that displaced the apprentice, rise-from-the-bottom system that had previously defined the American labor market. Curriculum quality and homework rates plunged, but endowments swelled.

“To keep their mammoth plants financially solvent, many institutions have begun to use hard-sell, Madison Avenue techniques to attract students. They sell college like soap, promoting features they think students want: innovative programs, an environment conducive to meaningful personal relationships, and a curriculum so free that it doesn’t sound like college at all,” academic Caroline Bird noted

Standards have been steadily lowered, educational quality - judging by the difference between Freshmen and graduates - has declined, and costs have gone up.  More than half of new graduates (about 17,000,000 young people) are working in fields that have nothing to do with their degree: getting that diploma doesn't help you get a great job.
And yet businesses today require a diploma even for jobs that have nothing to do with a college education, because they can't use aptitude testing to screen or find gems in their applicants.  But the increased numbers of people getting bachelor's degrees is decreasing its value to employers.  In fact, the need to find work to pay off huge college debt is pushing students into fields they are technically overqualified for:

There are 100,000 postal workers, 317,000 waitresses, and 18,000 parking lot attendants with undergraduate degrees. One out of every four bartenders has a diploma, and though they listen to moping for a living, few majored in psychology. Nearly 6,000 janitors have doctorate degrees.

And every one of those guys is taking a job that someone without qualifications or a degree could have done, but now cannot get.
This kind of decision, meant well, but poorly considered, has had very negative impact on the economy, lives of people, education, and culture.  It was poorly decided (like many of the Supreme Court cases from that time period) to fit an agenda and has had poor impact on the nation.
So if you ever wondered why that management job at the Pizza Shack required a college degree, or why the Personnel department treats any degree at all as better than clear experience and skill in a job well, now you know.
Posted by Christopher R Taylor at 12:25 PM

I certainly hope that your article here gets picked up on a much wider stage. Your in depth writing and research needs to be read by many more people. Excellent article, my business, an agricultural records collection and keeping business, has over 1/2 of the employees with degree's none of which are in the field they are now working in.