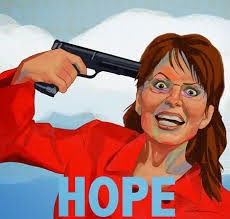 I am not a big Sarah Palin fan.  She can give terrific speeches (such as the very well-received and highly viewed 2008 RNC speech she gave) and she can be pretty good with statements.  She's not bad looking, and I admire her willingness to go after her own political party to crush corruption when she was governor.
My problem is that conservatism doesn't seem to come first had to Mrs Palin; she seems to be a bit of a rebel and a politician but not innately conservative in her worldview, so she has to get her ideas from people she trusts or listens to rather than from inside.
In the end, I suspect she's more show than substance, and I never liked the fawing admiration she got for a while from conservatives.  Still, she never deserved the raw, screaming, frothing hatred that she got and continues to get from the left, the entertainment community, and the clueless low info voters who want to be with the cool crowd.
At the time it was pretty obvious what was going on; they needed to obliterate her.  She was a charismatic, attractive, well-spoken woman with a Reaganlike folksy ability to reach the public that the left feared and hated.  She would be too effective.
As I wrote about in my Common Knowledge series, the left pulled out all the stops to wipe her out, and they had good reason to fear her: as soon as she was added to the McCain ticket, he tied with or pulled head of Barack Hussein Obama in polling.
What's interesting, though, is that the line has always been "oh we never were afraid, we were laughing at her!" from the left.  They insisted she was just so ridiculous they had to mock and attack her, not out of fear or concern but just hapless natural mockery.  Obviously this was a blatant lie, since they started it before anyone knew anything about her.  News organizations didn't send far more reporters to Alaska to dig into Palin's background than they committed to Barack Obama out of humor.  They did it out of fear and desperation to find something, anything to stop and destroy her.
Recently, they've admitted it.
Communist and former Obama cabinet official Van Jones recently admitted that on CNN:

Sarah Palin .. people forget. She had the Democratic party shaking in our boots in 2008. She came out, she gave that speech at the convention. That was, hands down, one of the best convention speeches - not by a woman, by anybody in 2008. People were running for the hills.

The reaction by the left was outrageous.  She was a strong woman in politics with a great speaking style and charisma and they treated her like an idiot, a piece of trash, there was no depth too low to dealing with this woman and her family.
And there was more than fear behind it.  Charles C. W. Cooke writes:


Here, progressive hypocrisy has been utterly breathtaking. Day in and day out, the more trigger-happy feminists within America’s media circus are moved to pen extravagant disquisitions on the nature of sexual inequality if and when a man they dislike so much as looks at them askew. Elsewhere, wholly substantive criticisms of Elizabeth Warren or Hillary Clinton are held up as shining examples of deeply embedded sexism within the United States, and of the subtle, sometimes invisible role that “hatred of women” plays within the country’s political culture. To take potshots at clownish figures such as Lena Dunham, we have learned, is to invite indignant death threats. And yet, when a veritable legion of male comedians elects to use foul, carnal, and, yes, “gendered” language to dismiss Palin and her family, our contemporary Boudiceas shrug at best and offer endorsements at worst. Sarah Palin, as the abominable bumper sticker has it, “isn’t a woman, she’s a Republican.”

That pretty much puts it as clear as it gets: the problem with Sarah Palin is that she wasn't a dutiful obedient drone for the left.  She dared to defy their order, their ranks.  She was off the plantation and had to be destroyed lest other women follow her path. 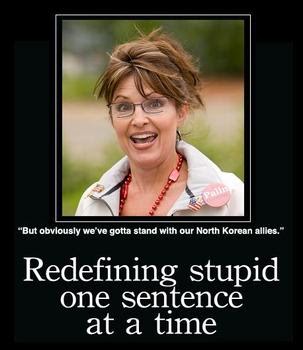 The comparison between Hillary Clinton and Sarah Palin was striking.  Clinton comes across as strident, shrieking, and unpleasant.  She's not a good public speaker, she seems bitter and arrogant, contemptuous toward the people she's forced to deal with.  Sarah Palin comes across as happy, fun, and welcoming.  It wasn't a pleasant comparison, but in 2008 it was inevitable.
And the significance of this isn't so much the political as the cultural, for me.  Whether Palin is done for politics or not, she's representative of the left's approach toward anyone who dares defy their order of things.  If you happen to belong to one of their favored groups and won't go along with their ideology, they hate you more than the white male.
Whether you're hispanic or black or homosexual or female or any other protected group, if you won't go along with the left politically, you're worse than an enemy.  You're a traitor who loses the right to be even called part of that group.  You're not black, you're a conservative Uncle Tom.  You're not a woman, you're a Republic**t.
And this is the worst sort of behavior, its the kind of actions that led people to lynch blacks in the south, burn books in the north, create lampshades out of prisoners in Poland, and burn witches in Scotland.  This is the attitude of the inquisition, this is where the worst in humanity comes out.
This is the epitome of intolerance and hatred of the other.  Its exactly, exactly what the left claims to be opposed and depict their political opponents as being characterized by.
For the left, its open season on someone that betrays their niche identity by daring to think for themselves.  That's why Bill Maher can say such horrific things about the Palin family and get a pass, but when he notes the brutal evil of Islamofascism is hated by the left.  Its why David Letterman gets a laugh and a wink when he jokes about Willow Palin being raped.  Its why a gubenatorial candidate for Democrats can call his opponent a whore in a speech and get cheers and laughter, not news and pundit condemnation.
Because as I've noted in the past, the left thinks not just that they are right, but that they are holy and enlightened, and that anyone who varies from this is not just wrong but evil and corrupt.  So they're fair game.  After all, no one cares about mean things said about Pol Pot or John Wayne Gacy.  The presumption of malice and monstrous hate in anyone who varies even a little from the left in political ideology is so ingrained that they simply don't see any wrong in such behavior.  Its totally reasonable!
And again, this is the same sort of argument and attitude used for genocide and evil in the past.  Those Irish aren't even human, who cares what you do to them?  African slaves aren't even human, they're property!  Jews aren't even human, you can do anything you want!  Dehumanize, reduce your opponent to a cartoon, to less than you and everything suddenly becomes okay.
And at the risk of repeating myself too much, that's exactly what the left claims to be opposed to.  Exactly what they do and say is what they accuse their enemies of being.  It makes me dizzy at times trying to keep up with it all.
Posted by Christopher R Taylor at 12:29 PM

It wasn't Bristol; it was the 14 year old Willow Palin whom Letterman used in his rape monologue. He later claimed to be speaking of the legal-aged Bristol to cover his disgusting behavior and pedophilia. It was hate, pure and simple, which I gladly return to him.

Thanks I'll update that