THE DEATH OF BEAUTY

"Why is modern art so very, very, very bad?  One would almost think these things are being made bad on purpose."

As an illustrator, the state of modern art does not affect me particularly.  When someone wants an illustration done, they don't turn to Kadinsky or Picasso, they turn to someone who can actually portray something accurately and effectively.  The fact that my stuff would never be hung in an art gallery is of no particular concern to me.
But the concept of beauty and art is dear to me not only as an illustrator but as a human being.  The three absolutes of ancient thought were truth, goodness, and beauty.  There was no subjective thought for the Greeks and the other ancient philosophers when it came to these concepts.  They were written in stone.
For these thinkers, the idea of "beauty is in the eye of the beholder" was accurate as far as it went, but it was not absolutely true.  People do perceive beauty differently, and what is pleasing to one person might not be to another.  But that doesn't make actual beauty subjective.
I've written about Truth several times and Goodness several times in extended essays, and I've long toyed with the idea of finishing the triad with at least one major essay on Beauty, but have not gotten there.  The problem isn't the concepts, its just the hook: trying to find something current and compelling for readers to hang it on and make the point more current and significant.
I think most everyone knows about the trash (sometimes, literally trash) that is put in art galleries and sold for gigantic sums.  From elephant dung to jars of urine to urinals and more, what is presented as art is a travesty and has been for some time now.  Why is that?  Why must art be so awful?
A few articles have come out lately examining this question because we're past wondering if its really art to wondering why anyone would even consider it to be.  John C Wright at EveryJoe examined this recently and examined it more closely at his own site. His conclusion is that art is, like much fiction, a casualty of leftist philosophy and politics.  In How We've Been Robbed of Beauty by the Left, he argues without stating it outright that art is a casualty of relativism.
Relativism argues that nothing is absolute, it is all subjective - that is, it is all a matter of one's perspective.  You cannot say something is true absolutely, you can only say its true... to you.  You cannot say something is absolutely wrong, you can only say you consider it wrong.  You cannot say something is truly beautiful, only that you think it is beautiful. For the relativist, its all a matter of what each individual believes, not based on anything certain and absolute.
Thus, beauty as an absolute is unacceptable in relativist philosophy.  Wright says:

If beauty is in the eye of the beholder, then anything, anything at all, can be declared to be beautiful merely by the artist. Like God creating light from nothing by the power of His word, the artist creates beauty not by any genius nor craftsmanship, but by his naked fiat. It is beautiful not because he actually created anything, but only because he says so.

By this logic, a urinal is beautiful, a light going off and on, a decapitated cow’s head covered in blood, flies and maggots, a glass of water on a shelf, a crucifix dunked in urine, a can of excrement, or an unmade bed. The argument given by the Left is that your inability to see the beauty in these things is due to your limitations, your untrained soul, your dullness. The argument merely ignores the fact that training the tastes to be dull, philistine and coarse is the opposite of training the tastes to be sensitive to beauty.

Thus, he argues, that beauty is either absolute, or it becomes meaningless.  If there is no certainty or standard to strive for in beauty, then it leave us only to ourselves and our basest desires.

Wright goes on in The Logic of Illogic to extend this to writing and other areas.  He complains that as John Scalzi has written about, the science fiction community is being kidnapped by the PC left and awards are being handed out not for well crafted sci fi but for emotionally compelling stories that promote a leftist worldview:

Here is this year’s Nebula award winning short story If You Were a Dinosaur, My Love which, at the time of this writing, is also on the short ballot for the Hugo.

It a less that a thousand words long, and I suppose there must be some merit to it aside from the quaint technique of opening each paragraph with a subjective form of the ending of the prior paragraph, which I call the IF YOU GIVE A MOUSE A COOKIE technique.

The situation passively described (in present tense first person stream-of-consciousness) is that of bigoted white southerners at a poolhall, on the eve of a wedding, beat the heroine’s fiancee, a palaeontologist, into a coma from which he may never wake; and as she stands in grief at his hospital bedside, she fantasizes that if he had been a dinosaur, he could have killed them instead. And she would turn into a flower.

I have no enmity against this story. Unlike what some of its critics claim, it is not terrible. Unlike what its fans claim, it is not great, or even very good. It is sweetly sentimental, melancholy, and shows some craftsmanship. It does not, alas, have any characters, merely lazy stereotypes: a bride, generic white bigots, a victim.

But his main point is that the left has a sort of uniformity in how it approaches everything and that system destroys real creativity and beauty, leaving only acceptable, correct political statements of the sort totalitarian governments require.

Both essays are well stated and argue a strong case for his position.  And mind you, he's not speaking about political leftists so much as the modern atheist naturalist relativist philosophical left.  Politics are a result of, the offspring or practical application of this philosophy, not its core.  So Wright isn't arguing against Hillary Clinton, he's arguing against the worldview and philosophy that produces a politician like Hillary Clinton.
I'd say Wright is correct in his analysis, as far as it goes.  But he hits most closely on the core problem in the first essay at EveryJoe:


In that timeless moment of sublime rapture, the heart knows even if the head cannot put it into words that the dull and quotidian world of betrayal, pain, disappointment and sorrow is not the only world there is. Beauty points to a world beyond this world, a higher realm, a country of joy where there is no death. Beauty points to the divine.

I've written about this before, but remember this scene from the film Amadeus?


The secret behind art, that indescribable wonder, the truth of what makes real beauty is that it is a glimpse of that which the naturalist, the atheist, and the relativist refuse to accept exists.  That there is more to this world that what we can measure and test and sense.  That reality consists of more than science and our senses are able to capture.  That the world we live in is only partly natural and partly supernatural.
Beauty gives us a glimpse beyond, to somehing other, something transcendent.  True art gives the viewer not just the scratchings of ink or layers of paint, not just the sounds or shapes, but something beyond it, to show something more and greater.  There's a truth and a goodness to beauty, just as there is a beauty in truth and goodness, and a goodness to truth and beauty.  And that truth is that there's more to life and here it is.  The tiniest eyeblink of a refracted flash of the beyond.
And if you cannot stand that concept, if you hate the very idea of it, then you must destroy and move away from it.  There cannot be beauty in art, or music, or writing, or any other creative effort.  There cannot even be any real creativity, only a sort of cunning.
In the place of this glimpse of the transcendent, there is a need to shock, to surprise, and to compel emotion.  It is no longer about truth or beauty or goodness, but about the visceral, animal response.  It is about "starting a conversation," or irony, or shocking the squares.  A picture of a man with a bullwhip up his pooter is declared art, while a picture of a man with a child is boring and lowbrow.
This didn't start out (entirely) deliberate.  Artists were less interested in doing what was great and beautiful than in what was new and distinct.  Rembrandt did it better than anyone before or after, what was there left for a less-talented artist to do?  So they started experimenting with technique and style rather than presenting truth through beauty.
Picasso and his kin began focusing on how people percieved images, and wanted to reduce art to a more simple, child-like freedom, so we get this: 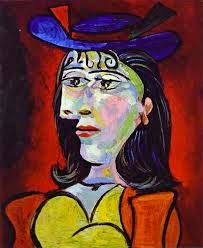 Kadinsky didn't want to be tied down to actual representation of anything at all and instead was interested in color studies: 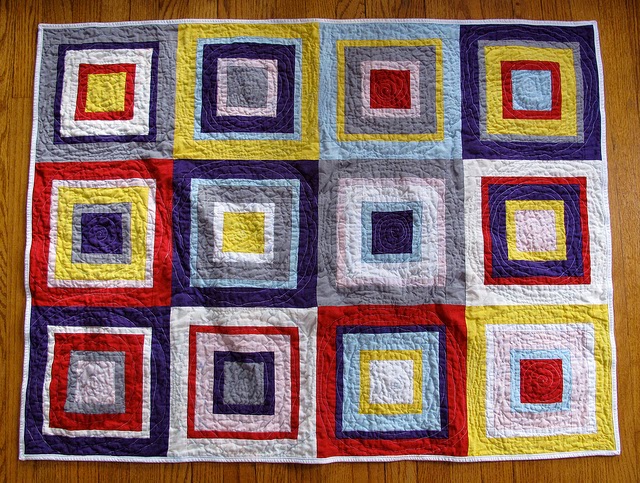 And Jackson Pollock just wanted to let gravity and the world paint for him, drizzling colors and seeing how they turned out: 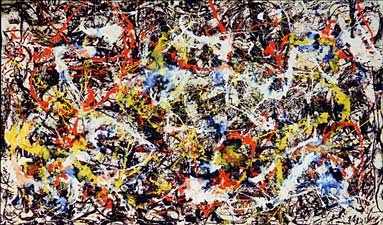 Finally we reach the stage where they literally had an actual "invisible art" display in London by such luninaries as Yoko Ono and Andy Warhol: 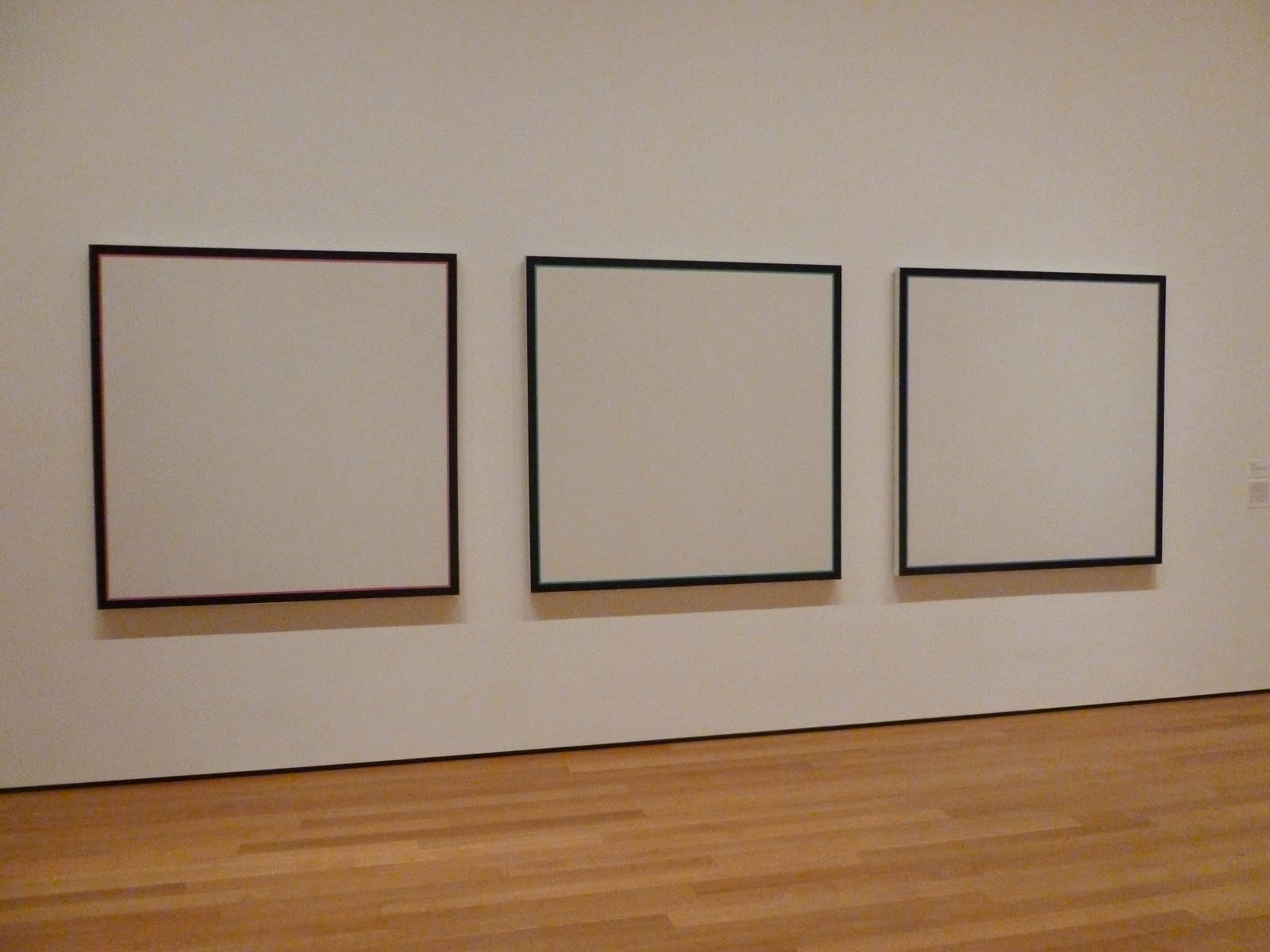 The news report snarks that this will infuriate "traditionalists."  No it just saddens actual artists and people who know what beauty is.  Its the state of the soul of art today: empty.  Lacking any of the actual education and philosophy to comprehend what beauty is, these artists didn't even have the tools to begin to unlock art.  All the have is technique and innovation and theory.


*Hat tip to American Digest for the Wright articles.
Posted by Christopher R Taylor at 11:42 AM