"...if you don't like your job you don't strike, you just go in every day and do it really half-assed: that's the American way."
-Homer Simpson 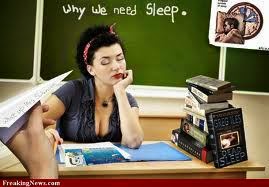 I went two whole years in a row without missing any school.  That was unusual for me because usually in the second semester would struggle a bit and I'd miss a few days then pick up again in Spring.  But it was rare to miss even one day a month; I liked school until my senior year and I looked forward to going back so if I could possibly go, I would.
I don't suppose that's particularly typical of kids, but I'd guess that it is unusual for students to miss too many days a month unless illness or disaster strikes.  Apparently the story is different for teachers these days.
In the San Francisco Chronicle, we find this story from Jill Tucker about the SF school districts:

While absenteeism is usually considered a student matter, in San Francisco - and many other districts - the average teacher misses more school than the average child.

If last year's numbers hold steady, the 4,100 teachers in San Francisco, on average, will each be absent about 11 times this school year, about once every three weeks. That's four to five days more than a typical student, out of 180 days total.

Ms Tucker notes that four of those days are in service and other required days.  The rest, teachers are skipping class.  And the days they miss are often pretty obvious:

In San Francisco, where classes start Monday, teacher absences gained attention last year when the district struggled to find enough substitutes to fill classrooms the day before Thanksgiving break, when more than 1 in 10 teachers called in sick, took the day off or were in training. Similar spikes in absenteeism happened several other times on a Friday or before three-day weekends.

This isn't unique to teachers; taking a day off before an extended weekend or holiday is pretty common.  But teachers are the ones who constantly claim they're in it for the children, that education is the most important thing ever, and so on.  So in theory, they hold a higher moral standard and dedication to their work than Joe Blow at the tire factory.
And that's the thing: whatever standards teachers once held, it seems the majority of them have let slide, or drop entirely.  Because this article points out that while slightly high, this is close to average in every major city in America.  San Francisco isn't unusually plagued with lazy teachers, this is pretty typical for big city schoolmarms.
In fact, across 40 school districts studied, 16% of teachers are "chronically absent;" missing 3 or more days in a row repeatedly, excluding maternity leave.
You're not going to get an apple that way.
Now, this approach to work isn't unusual as I've said before.  Its kind of become the standard for workers of all sorts of age groups and demographics in America.  The attitude is that you do the least amount of work possible to retain your job, whine until you get raises, and then go spend your money on what really matters in life: yourself and having fun.
I wouldn't at all be surprised if this hasn't infected every layer and type of job: pastors to brain surgeons, cops to judges.  Our president at the moment is a perfect example of a guy who seems like he'd rather be out partying and having fun than doing his work, no matter what is happening around the world.  Its become sort of a cliche now: if something has gone horribly wrong in the world, if some crisis erupts that requires the president's attention, he's either at or about to go to a fund raiser.  And fund raisers are not hard work, they are a party you might say a short speech at then go hang out with rich people and eat expensive food.
But he's not the cause of this or particularly unique, he's just a symptom.  Presidents are elected that represent their culture, not lead it.  He's very prominent and visible at it, not unique.  A concept of work having innate worth and being something valuable in its own self has been lost.  Work is drudgery, slavery you must endure so that you can get the money you deserve before even setting foot in the job - indeed, you deserve more but the boss is a stingy money gouging jerk.
The thing is, teachers were supposed to be different.  They endlessly, continually complain about never being paid enough for their hard work which they are so dedicated to and so honorably engaged in for the future.  Selfless, tireless, setting an example to the children.  Its not their fault that kids turn out badly, its the parents, the curriculum, the society, the gangs, the Republicans cutting their funds that are all to blame.  Teachers try so hard and work so hard, surely we can pay them more?
There are a lot of much harder jobs out there.  Firemen, oil field workers, soldiers, prison guards, etc.  You can list several dozen harder jobs just as critical to our lives and future, and none of them whine as much as teachers about their pay and work.  Not even half as much.  Soldiers grumble that they get lousy pay for risking their lives, but they don't go on strike and tell everyone, everywhere, all the time that they're paid so awful like teachers do.
Its such a constant drumbeat it is ridiculous.  According to US News and World Report, teachers are actually paid pretty well:

You're not going to get rich at the job, but that's not the point, is it?  And those numbers are two years old, showing a five year trend of going up on average, across America, every year.  Fifty-five grand a year for working nine months ain't bad, particularly when you claim your job is really about children and the future, not getting wealthy.
But what do we hear every time?  Teachers should get paid more, why do athletes make so much?  More, more, more.  And yet teachers seem to want to work less, less, less, taking extra time off.  This does not present a unified front of selfless sacrifice and honorable dedication to the children.  If you cared so much about the kids you wouldn't skive off an extra vacation day at their expense, would you?
Part of the problem is that school districts like San Francisco don't even require asking permission to take time off; you just call an automated system which gets a substitute.  They don't have to tell anyone at the school or ask the principal if they can get a day off, they just do it and call in to get a sub.  This kind of "innovation" simply makes people more likely to use it.
And teachers' unions have succeeded in making it so hard to even discipline a teacher, let alone fire them no matter how heinous their behavior, that there's no pressure or encouragement to stay at the job and work hard.
Think about your job right now.  If you didn't have to call in sick, just set up a replacement, if you were very difficult to fire no matter what you did, if you didn't even have to talk to a supervisor to let them know you won't be in... how many extra days off might you take?
Culture, system, and human nature are conspiring to make matters worse than ever in education.  More funding won't make a difference to this, not even a small difference.  If you paid teachers ten times as much they still have no motivation to not take extra days off.  If you quadrupled funding per class room it wouldn't make the slightest difference to this.  Money wouldn't change this.
The system is practically designed to encourage taking time off, and culture encourages people to do so because after all, what matters is how you feel, how happy you are, how comfortable, healthy, and good you feel about yourself, and oh yes, how much sex you have. We're told that children are our future, that educating young people is the most important thing someone can do, and that it is a travesty that Biff Linebacker gets paid ten times as much as a teacher every year.
But the system and culture doesn't act like that's true at all, does it?
Posted by Christopher R Taylor at 9:02 AM