THOR, YOU'LL BE A WOMAN SOON

"For any given male character, there is a female version of that character."
-Internet Rule 63

So, this is happening to Thor in the comics soon: 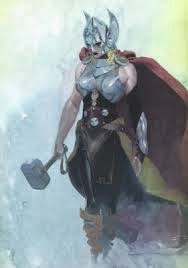 Its not a what if story, its not a dream sequence or an alternate universe, its not in an annual, this is the main storyline for Thor, and its 'permanent' as comics get.  Thor is going to be a girl.
What has been released so far is that apparently Thor has gotten to be such a jerk (again) that Odin takes away his power and gives it to someone else he deems worthy.  As the movie showed, Mjollnir has an enchantment: anyone who is worthy may take up the hammer and gain the power of Thor; anyone who is not cannot lift it.
So a woman picks up Mjollnir and gains the power of Thor.
Now there's the usual "what the??" internet outrage out there, and lots of publicity out there from news organizations covering the event.  Due to the popularity of the Thor movies, the character is pretty familiar to people and so there's quite a bit of interest.
When the discussion online comes up, inevitably someone posts about this from the past in Thor: 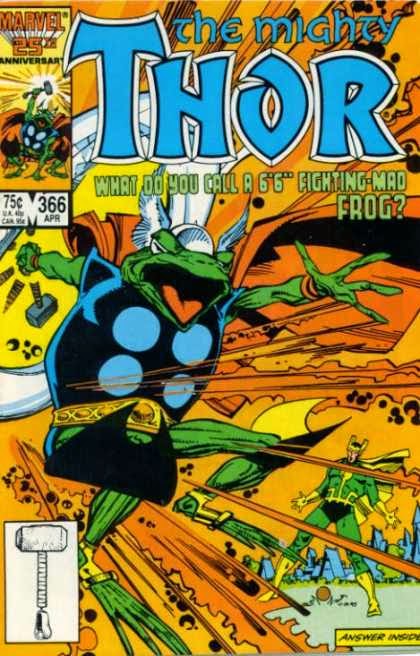 Yes, that's Thor as a frog.  It happened during one of the finest runs of the comic ever, written and illustrated by Bill Simonson.  The difference here was that this wasn't some big advertised event to sell comics, it was part of the story.  Thor, turned into a frog by the Enchantress, made his way to Mjollnir and lifted it, becoming Thor Frog.  It wasn't just fun it was actually a great story, but it only lasted one issue because it was a single event.  It wasn't someone else, it was Thor.
This also happened in Thor in the same story run: 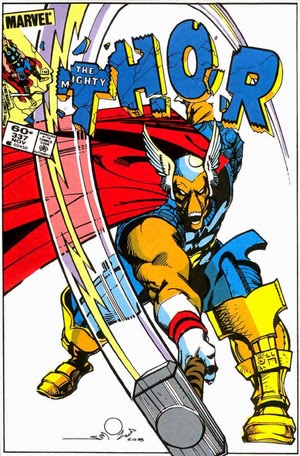 That's Beta Ray Bill, an alien.  Its not Thor that turned into this, its not Thor losing his power, its someone else who picked up the hammer, an alien trying to avenge his fallen people against the same demons (from the Fire Giant Surtur).  He didn't replace Thor.  He didn't take Thor's place.  He fought along side Thor (after an initial conflict) as an ally.
Incidentally, after this incident, Odin changed the enchantment on the hammer so that it wouldn't happen again; only one Thor at a time.  But he saw such heroism and greatness in Beta Ray Bill that he was given his own version of Mjollnir.
No, this girl Thor is different.  Its a replacement for Thor, its meant to be long-lasting, and its not a story matter, but a sales matter.  To be sure, they'll work a story up around her, but that's not where the concept originated.  It came from a meeting I can almost hear in my head:

-Bob, the sales of Thor aren't keeping up with Avengers and Iron Man
-You're right, we need to find a way to get more interest
-Or sales are down across the board; people just aren't reading comics as much any more
-Well we need publicity, a big event to get interest, that will pick up sales!
-I know, lets change Thor!
-Comics need more Strong Women© Let's make Thor a woman.
-And she has to have big knockers!

OK maybe that last part didn't come up; it was just assumed, this being comics.
Ever since the Death of Superman storyline, comic book companies have been using events like this and publicity to generate sales.  They release the information about big events of this sort far in advance to create buzz.  In the past, they would keep events like this secret, so that it would be a fun surprise and exciting to readers.  Today, the business is driven not by creators and innovators, but by a board of directors.
Each time a big event like this happens (Spider-Man getting married, Batman having his back broken and replaced by a series of others, etc) the companies push it big in the news interested in the sales that come from the publicity.  And more often than not, its driven by the business end rather than the story.  There are exceptions: the Civil War event recently in Marvel Comics, for example was more story driven, as lame as it was.
But these changes are temporary.  Everyone knows that Thor won't stay a girl.  Everyone knows that Spider-man won't permanently have swapped minds with Doc Ock.  Everyone knows that big events are just for a little while.  And since comic book speculation (buying issues you think will be collectible for later sales) is pretty much dead, the events aren't as good for sales as they used to be.
Comic books as done in the USA face a pretty significant dilemma.  Superman has been continually published since 1938, and he never really changes.  He's still the same basic guy with the same basic supporting cast (Jimmy Olson, Lois Lane, Lex Luthor et al), with the same hair cut, costume, and so on as always.  After a while, you've pretty much told all the Superman stories you can, but you still have to come out with that next issue for the following month.
But if you keep going without change, the story can easily become stale, so long-term readers become bored or disinterested in the comic, and you lose customers.  The answer is to have the character change over time.  Superman has, over his history, been married, died, changed powers (and split into two), had longer hair, regrettably in some cases, got a dog, and so on.  Spider-Man started out in high school, eventually went to college, got married, had a kid, even went crazy, thought he was a clone, found out he was the real deal, changed his costume which eventually became a villain (literally, the costume was a living symbiote), and more.
But if you change the character very much you run into problems as well.  Part of the reason a character is so interesting and likable is what they are designed as.  Peter Parker as geeky high school student who can't get a date and is picked on was part of his charm.  Superman as do-gooder raised in heartland America for basic ideals and principles was part of his charm.
So if you change them, you run the risk of losing that charm, losing the very thing that made people like them to begin with.  And if you age and mature characters, where do you stop?  Peter Parker at 60 with a gut and grandkids?  Batman in a wheelchair and long white beard?  Wonder Woman going through menopause and fighting varicose veins?
Also, changing characters annoys long-term readers.  They grew up with the Green Lantern as Hal Jordan, so if he goes berserk and tries to kill the universe and is replaced by someone else, you can alienate your basic core of loyal readers.
So comic book creators are in a bit of a bind: they can't really change things, but they have to.  So you get these events.  Wonder Woman loses her powers and becomes an international spy.  Green Lantern goes through a series of different people getting the ring.  Batman is replaced by other people, Gotham City is hit by a 9 point earthquake and flattened, Phoenix dies.
But a year or two later, its all back to the way it was, as if nothing changed.  The latest big stunt coming after Thor Girl is Wolverine dying "permanently."  He lost his adamantium bones a while back and got them back, now he's going to be killed, which I'm not exactly sure is even possible given his conception.
But it won't last.  Wolverine will be back.  Thor will be a guy again.  And the sales of these comics will continue to decline over time as people stop buying 5 dollar comics and get them online or just watch films instead.
In the end it doesn't really matter at all.
Posted by Christopher R Taylor at 10:31 AM

They have the She-Hulk. They could keep She-Thor around and call her Thorazine.

"Was it because of a gay queen pouting in the Marvel meeting rooms or because of jagoffs out for a better newsstand who decide to gay up some comic books, what difference at this point does it make? "