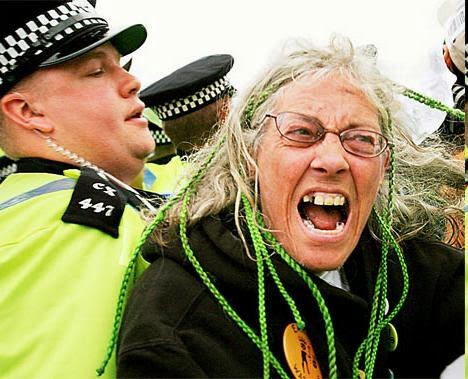 Yesterday I wrote a big post on an excellent article I hope people are reading by a woman who explained why she was no longer a leftist.  That post got linked by American Digest, which I appreciate, and comments were left at that site as well as at my article.
I didn't do a very good job, I fear, making my final main point because the piece was getting a bit long, I kept being distracted, and I really wanted to mostly focus on Danusha V. Goska's article.  But because of that, some misunderstood what I meant to say.
My primary argument was not that if we're nice enough hordes of people will abandon leftist ideology and we'll all win in a big rainbow-arched parade of joy and utopia.  I think we're headed to a very dark and difficult time in the very near future.  I think the left has won in America and the republic as we knew it is in its last stages.
My point was rather to note that Goska's reaction to the left and right tells us something not just about how we should behave, but how we can behave.  Because the bitterness, anger, hate, and strident outrage she saw in her leftist friends and colleagues drove her away, toward the love and genuine good will of those she knew on the right.
See, the point isn't that this will be some massive flood of converts because of behavior, but that it tells us what we ought to avoid.  When I wrote this:

There's only so much reactive bitterness and hateful destructive fury people can take. Yes, the left's unrestrained, insane fury helped get President Obama and a commanding majority in congress elected, but that kind of thing has no legs, it cannot last. And in the end, while you can get attention and some power by being such a monster, people tire of it and begin looking for someone who smiles once in a while in a non-ironic, non-smug manner.

I did not mean to say that we'll win in the end because the left is being such jerks.  What I meant was that when people see enough of this, they get sick of it and it stops working.  That means the left has to (and will) do something else.
As long as they control the bulk of the media, entertainment, education, and popular culture in the west, they can always depict the right as being far worse and that will be enough to keep and expand their power.  That's the hidden lesson in the upcoming election I fear too many are not thinking about.  Yes, people are very upset with and annoyed at Democrats.  That doesn't translate into voting for Republicans because the left has been so good at making the GOP seem worse than anything they Democrats do, no matter what they do.
In any case, there was a line in Goska's 10 reasons that says what I mean quite well:

I volunteered with the Sisters of Charity. For them, I pumped cold water from a well and washed lice out of homeless people's clothing. The sisters did not want to save the world. Someone already had.

See, the left has no choice but to eventually slide into frustrated, furious anger.  Their worldview backs them into a corner where they get more and more bitter and confused.  They believe that through right effort, program, and proper education, they can create a wonderful utopian dream world where war ends, racism vanishes, crime disappears, and everyone lives in love, doing good for other people spontaneously.  That's the entire concept of Communism: that if we just set things up right, it will be paradise on earth and all will work for the greater good without needing that awful greed.
And when the world continually and stubbornly refuses to go along, when reality keeps conflicting with their dreams, when their policies continually make things worse, they crash into this over and over again with increasing confusion and frustration.  They begin to blame others and everything except their basic idea.  They can't be wrong about this, so it has to be something else.
And that something else is inevitably those who disagree with them.  And who could disagree with this beautiful glorious dream of utopia but evil monsters?  And its not just okay to hate such a person, but morally proper.  You must hate someone who blocks this beautiful dream.
Contrast that with what Goska wrote above.  Someone has already saved the world.  We don't have to, and ultimately, cannot.  Right thinking, education, policies, and efforts are good and laudable.  We should strive to do better and improve the world.  But we aren't going to make paradise on earth by doing so.  Its not going to happen.
People on the right shouldn't be the torch-bearing pitchfork-wielding mob of outraged fury like the left because its ugly and awful and destructive.  The left is correct when they say hate is awful and wrong.  But its always awful and wrong to hate people, even if they disagree with you politically.  The right shouldn't make up ugly names about the president and scream hatred at political opponents because its counterproductive and drives people away.
The contrast between a group of shrill tooth-gnashing people filled with hate and sadistic rhetoric against their opponents... and people with hope and genuine smiles doing good for those around them is a very, very powerful cultural force.  The hippies knew this, even if they weren't consciously aware of it.
And the right doesn't need to be so filled with rancor and desperate fury like the left is because we have something better to offer and aren't driven by emotion and continual cognative dissonance.  We aren't thwarted by reality's constant refusal to go along with the plan.
We aren't relying on our efforts to save everything and bring about paradise, because we know that's not possible.  Communism requires people to change their very nature, to lose all greed, selfishness, laziness, and sin.  Mankind cannot make that happen no matter what government program or education system we develop.  Capitalism shapes those evils into the most productive manner possible.  Its a sort of economic Aikido: using the strength of the enemy against its self, rather than trying to just delete it.
We don't have to be as angry and frustrated as the left because we aren't up against an impossible goal.  Our beliefs do not require reality to change or a fundamental factor of human nature to be eliminated magically.  We aren't raging against the night, we're lighting a candle to see the way through.
So the point isn't "everything will be great!" but rather "we should avoid the furious hate and bitterness of the left and our ideas don't require it."
Posted by Christopher R Taylor at 9:29 AM