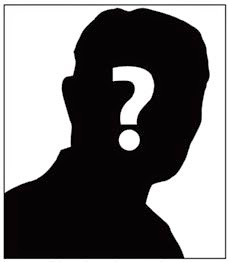 You'll see this kind of comment often on news websites, blogs, and around the internet.  It will be in response to a news story of an event, usually a crime, in which some individual is being sought or has been captured, but specific, key details about them are ignored entirely.
Examples of this aren't hard to find, and they come in a lot of different types.  There's the "spot the party" story where the political party of a troubled or corrupt politician is left out entirely or buried deeply into the story.  There's the "spot the religion" type which conspicuously avoids mentioning the religious affiliation of someone who has engaged in an act based on their religious zealotry.  There's the "what color?" story where a criminal the police request people watch out for is notably lacking the suspect's ethnic background.
Leaving out key details of a person's description or ideology where it makes sense is odd for a news story (remember who, what, where, when, why, and how?), but it happens out of a concern about potential lawsuits, but mostly out of political correctness and mindset.  News organizations are often very, very careful to avoid mentioning Muslims in a negative light out of fears of some mythical backlash.  And in the US, many news outlets will try very hard not to associate Democrats with anything negative.
In response, the comments can become pretty amusing.  Its become a sort of game of charades, with people postulating ridiculous guesses about the missing information.  Why we have no idea what that senator's political party is, could they have been Green party?  Maybe they're in the Silly Party, perhaps they're a member of the Whigs!  What religion could that young man screaming "Allahu Akhbar" been a part of when he blew up that Jewish clinic?  Maybe he was Presbyterian!  Or perhaps Hindu?
It becomes a source of rich and comedic mockery at the expense of the news organization and the writer.  The only reason this started in the first place was because of the blatant omission of applicable information.
Its not that a news story must always include this information.  If someone gets in a traffic accident, who cares what political party they are in or what their religion is?  Its irrelevant to the story - no matter who they are.  There's no reason to detail the race of a person in a news story unless its key to identity in the story or otherwise similar description is being used.
So sometimes the Profiling comment can be just an attempt to jab political targets.
I bet he was an illegal immigrant!
He was probably a Republican!
Of course it was a man that did it!
What do you want to bet he was Muslim?
Maybe those guesses are true, but that doesn't necessarily matter to the story.  There are bad folks in all sorts of categories, but their different identity groups don't always matter.  If its a story about an individual citizen caught up in something, what difference does it make about the organization they belong to, or what faith they hold?
Profiling comments can be good for tweaking overly sensitive, activist, or foolish writers; they need the feedback to help nudge them toward greater professionalism.  At the same time, they can just be an excuse to bash some group on the head, and that's where profiling goes wrong.
*This is part of the Profiles in Commenting series.
Posted by Christopher R Taylor at 9:34 AM