“When you smoke the herb, it reveals you to yourself.”
-Bob Marley 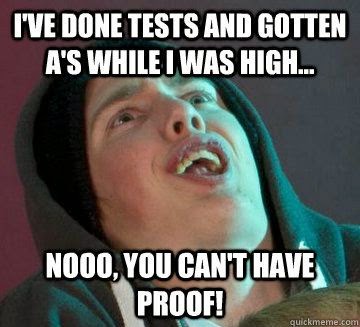 Daniel Keyes died recently at the age of 86 years.  He wrote the book Flowers for Algernon which is one of the saddest, most deeply disturbing books I have ever read.  It is beautifully written and a brilliant concept, and it makes me wonder about his other books, but a very sad book.
For the few of you who might not have read this book (I recommend doing so) it is about a retarded kid who is given a special treatment that increases his intellect enormously.  The book is written as a diary from his point of view as his intelligence and understanding of the world around him grows, and how that affects him.  He falls in love, he learns much, he begins to see and know things he couldn't before.
But the treatment is only temporary, and as the diary progresses, you feel the horror and tragedy of this young man's mind melting away and the sadness of watching him regress back into the childlike mind of his origin.  Now I'm hardly the smartest guy in the room but anyone with any degree of intellect reads this with fear and misery.  Fear that it might happen to us, some day, through just senility or Alzheimer's, and misery at what it would be like.
Which brings me to a study that was recently released by the National Institute of Drug Abuse in the USA.  Reported in the New England Journal of Medicine for the National Institute of Health, the report claims that use of marijuana in teenage years causes a permanent loss of IQ.  It is estimated that 6.5% of high school seniors use marijuana nearly every day (and that number is probably higher, as it is illegal and self reporting will be diminished by that fact).  After a long-term study covering 38 years, the researchers concluded:

The scientists focused on marijuana’s harmful effects on teens, an age group in which the brain rapidly develops, which is one factor that could help explain increased risks from marijuana use in this population. Research suggests that marijuana impairs critical thinking and memory functions during use and that these deficits persist for days after using. In addition, a long-term study showed that regular marijuana use in the early teen years lowers IQ into adulthood, even if users stopped smoking marijuana as adults.

The research, part of the "Dunedin Study" (no relation to Aragorn) examined over 1000 people starting in 1972 and watched their lives, testing them regularly to see how their brains and bodies were, examining psychology and behavior, and so on.  And they discovered that if you smoke weed as a teenager, you are dumber as a result.
Now, anecdotally, I know this to be rock solid objective, obvious fact.  You probably do too, thinking back of the idiot stoners in your youth.  I knew guys who were just brilliant in school that started smoking pot and over time just got dumber and dumber.  It was awful to watch, like Flowers for Algernon in action.
Now, some of that loss of intelligence can be recovered by stopping pot use, and certainly the amount you smoke makes a difference.  Guys who toke constantly are destroying their brains much faster and much more effectively than someone who just has a few joints over the weekend while watching DVR'd Parks and Recreation.
But the data is consistent either way: pot kills your mind.  And its not particularly surprising that smoking anything is detrimental to you.  I mean, deliberately sucking burning materials into your lungs is bad no matter what it is, and no matter how your doctor told you its good for your glaucoma.  And using it in other forms (brownies, etc) doesn't change the data any.
Every time I bring this up, at least a few people yell "no way, I toke up all the time and it hasn't affected me, dude!"  And I can't help but think of this scene from Beerfest (strong content warning, definitely NOT safe for work, but very funny):


Not shown: the 400 pound woman he takes home.  That's where the whole concept of "beer goggles" comes from.  You think you're no dumber because you're stoned.  The guy who's under the influence has impaired judgment.  The guy who is not as smart isn't smart enough to know better.  The people watching from the outside?  They can see what's really going on.
Now, usually this is where people say "well if you can't handle your weed, yeah but I'm better."  And that's what everyone says, no matter what a mess they are, until they hit rock bottom and say "I need help."  The problem is, pot is damaging to brains and has other strange effects (it seems to cause insomnia later in life, for example) at any level of use in teens, its just more pronounced the more its used.
Scientists believe this is because the human brain develops significantly in the teenage years, so the damaging effects of pot have long-term, possibly permanent effects.  But here's the thing to consider: pot affects your brain in negative ways at all times in your life; it just does nastier things to teenagers.
Now, that doesn't mean there needs to be laws banning marijuana; alcohol does terrible things to your brain too (by killing many brain cells, to begin with).  And I think that the federal government has no constitutional permission to regulate drugs in states.
It just means that anyone who's smart and cares about their health might want to think twice about how good it makes them feel to smoke weed and its effects on their life.
Posted by Christopher R Taylor at 9:25 AM

Having encountered many heavy pot smokers over the past 30 years, it is a plain fact that it amounts to a self-induced Dunning-Kruger effect. There is a stark degradation of cognitive ability - a literal stupidity - which you typically do not see with drunks, and which the pot user himself never can. The effect is noticeable even in teens, compounded by their typical arrogance of presumed immortality. Show them burned-out stoners in their 50s and the teen will insist "that will never be me!" even though everyone who knows them sees it already is.