THE CASE FOR FATHERHOOD 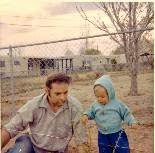 My father died quite young, back in 1988 at the age of 51.  I was pretty young back then too, barely 22 and a lot of growing to do in my life.  But his imprint and the things I learned from him were very foundational and still have a major impact on how I view the world and what I do.  In those short 22 years I learned so much about life, what it means to be a man, and how to behave that I cannot imagine what it would have been like to hot have my father in my life from the very beginning.
But many children experience just that.  And while I suspect deep down everyone knows better, society seems to want to act as if kids without dads are not really any worse off - and according to some radicals - are probably even better off.
Recently Anthony Daniels spoke (pdf) about fatherhood and the family in England, and his words resonate with far too many American families as well:

Mothers would say to me that they were pleased to be independent, by which they meant independent of the fathers of their children — usually more than one — who in general were violent swine. Of course, the mothers knew them to be violent swine before they had children by them, but the question of whether a man would be a suitable father is no longer a question because there are no fathers: At best, though often also at worst, there are only stepfathers. The state would provide. In the new dispensation the state, as well as television, is father to the child.

And this is too often the case in America as well.  With the state providing food, shelter, utilities, and other goods for the children and mothers, it has taken much of the obvious roles of the father away.  The kids are taught about family and manhood by entertainment, local examples, and schools.  The protection comes from police and even gangs.  The fathers aren't exactly absent - they typically live nearby - but are in no relationship with the child.  They're not fathers, they are just men who live in the area.
The assumption of those who offer the state as a proxy for father is that anyone can be as good, or perhaps even better, a father than the real parent of the child.  That the state can do just fine in this role because parents are interchangeable.
Former Texas Senator Phil Gramm illustrated the absurdity of this claim with a story.  He told a woman, “My educational policies are based on the fact that I care more about my children than you do.” She said, “No, you don’t.” Gramm replied, “Okay: What are their names?"
There's no relationship with other people's children for the state, beyond a clinical intersection with their life.  There's no fatherhood, only provision of various goods and services.  A few recent studies showed the significance of fathers in the lives of children.
Papa was a rollin' stone
Wherever he laid his head was his home
And when he died, all he left us was alone.
-The Temptations, "Papa Was A Rollin' Stone"
The first examined children who were abused or beaten, particularly when younger.  What they found might seem surprising to many: kids are more likely to be abused by single mothers than by fathers.  Why?  Warren Farrell speculates in his book Father and Child Reunion:

Domestic violence, as I document in Women Can’t Hear What Men Don’t Say, is a momentary act of power designed to compensate for a continuing experience of powerlessness. Which is why adult women abuse adult men as often as the other way around and why single mother households account for 43% or all abused children.

According to the book, over 60% of all kids killed by their parents are killed by the mom in a single parent household.  Children are more than twice as likely to be victims of neglect by their mother than by their father, possibly because mothers are more likely to be in a position to neglect kids (as the primary caregiver in the home) and possibly because single parents feel they don't have time to properly care for them.
In fact, for women as well as children, the safest place, statistically, is in a home with a father and mother in it.
When you comin' home dad?
I don't know when, but we'll get together then son
You know we'll have a good time then.
-Harry Chapin, "Cats In The Cradle" 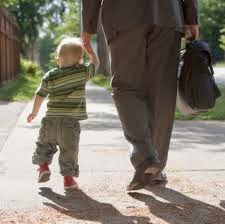 Another study examined a feminist quandary.  While feminists reasonably and properly insist that men need to step up and take their share of the care for children, they also argue that women are best at it and men shouldn't be taking care of especially young children on their own.
The concept of "Shared Parenting" by separated parents is that each one has a burden and can care for children - even infants - because both are parents.  While it is true that women provide things no man can and generally have a nature and approach to parenting that men lack... that is true in reverse as well; men provide what women in general cannot or do not.
An examination of 45 years of studies recently showed that fathers can and do provide good care, and further that it is bad for the children for the father to not share parenting duties and time.  Given the tendency of judges to side with the mother in child custody cases, and the pressures by feminist groups to keep children away from what they consider brutal, violent, and dangerous men (who are secretly all rapists anyway, according to some radical feminists), this kind of information is revolutionary.  Yet again, common sense notes this is obvious.  Fathers are parents too and there's nothing inherently inferior or incompetent about a man caring for a child.  Having been raised by two parents I know how well my father could do when mom was away.  It was different, but not inferior.
A third study in 2013 by Sara McLanahan, Laura Tach, and Daniel Schneider was even more confirming of common sense.  Lestlie Loftis writes at PJ Media:


The researchers took  peer-reviewed studies, culled them for studies designed to isolate causal effects, and ended up with 47 studies to analyze. They could not identify the precise mechanism of the adverse outcomes, but they did find causal effect between father absence and social-emotional development. (Finding cause without being able to pinpoint the mechanics is common in science. Just ask an anesthesiologist.)

They suspect, and recommend further research to confirm, that father absence does not reduce cognitive ability but that it increases behavioral problems which hamper cognitive ability. Or more simply, father absence doesn’t affect kids’ ability to think but makes them angrier, sadder, and more stressed. When they act out from those emotions, then they sabotage their potential.

McLanahan, Tach, and Schneider not only found causal effect, but also that causal effects were strongest where the conventional wisdom would call them weakest, in early childhood father absence and in boys.

That a missing father would be detrimental to the development and learning of children is not surprising, but it is not hard to find writing and speech that says otherwise.  Why anyone would argue otherwise is a matter of speculation, and while it is easy to assume the worst out of someone who would do so, I think its more a matter of academic detachment and theory rather than wicked mustache twirling.
He never said he loved me
Guess he thought I knew.
-Reba McEntire, "The Greatest Man I Ever Knew"
If you start with a theory (say, men are awful or centrally planned state power should be increased) and then start looking for ways to support that, you can find all sorts of ways to do so.  Its called an a priori argument in rhetoric - an argument that presumes it is correct, and looks for support rather than examining the facts to learn what is true and what is not.
And if you are so distant from families with children - as many academics and elites are, either having no children or having them essentially reared by someone else - then this becomes an intellectual exercise rather than one that is shaped by experience.  You can argue yourself into things that you'd never buy, had you gone through them personally.
The overall data shows an unpleasant reality: that children who lacked a father are more likely to become involved in crime, suffer poverty, lack education, and become dependent on the state.   Its no coincidence that Chicago, where 75% of black children are born outside of marriage and without a father to raise them, is the most violent, homicide-plagued city in America.
Fathers are a critical part of a child's growth, development, and life, beyond childhood.  There are still times when I, at nearly 50 years old, need my father's guidance and wisdom and do not have it.  I feel that lack, and have to try to find my way without what I should have had to help guide me.
And a nation without fathers is, I fear, a nation without a future.
Posted by Christopher R Taylor at 9:44 AM