"We've all been raised on television to believe that one day we'd all be millionaires, and movie gods, and rock stars, but we won't. And we're slowly learning that fact. And we're very, very pissed off."
-Fight Club 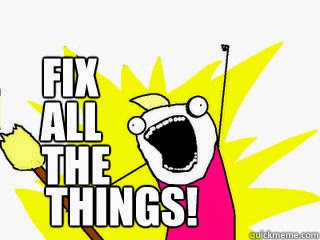 If there's one thing young people, particularly college people, like, its the feeling of being at the edge of revolution, being part of something big and important.  Most children to some degree grow up with this belief, and the more wealthy and safe the families, the greater the expectation.  But this confidence gotten more pronounced in later generations.
Raised to believe they are special and unique and destined for greatness by educators and parents more concerned about self esteem in children than being ready to face a cruel, uncaring world, children expect that they will be terribly important and pivotal in the future, and many never grow out of this stage.
This is played off of by the left, which presents the world as a horrible place that they can change.  The entire Obama campaign in 2008 was all about this; "we are the ones we've been waiting for."  Vote for Obama and together we'll fix all the problems!
So far they've been very successful with this approach, because young people, particularly those of college age, are just beginning to realize the way they were raised and the way they understand the world ought to be is very different from how it really is.
The left shows up and tells them it can be that way, if only everyone would do what they say.  That we can have that wonderful utopia, that we can fix it all with a few more taxes, a bigger government, a few more laws.  Some will have to give up things, but that's okay they're all richer than you are anyway.  Lacking discernment and experience enough in life to see through this, young people eat it up with a spoon.  Its been tremendously effective for 40 years or more.
But they're in danger of throwing all that away.
Recently leftist Michael Bloomberg, former mayor of New York City, gave a commencement address to the graduating class of Harvard University.  In it he said this about recent blocking and censorship of conservative ideas and speakers at institutions of higher learning:

It is just a modern form of McCarthyism; think about the irony: In the 1950s, the right wing was attempting to repress left wing ideas. Today, on many college campuses, it is liberals trying to repress conservative ideas even as conservative faculty members are at risk of becoming an endangered species.  And that is probably nowhere more true than it is here in the Ivy League.

Putting aside the misconception about "McCarthyism" he has a point about ideological repression on college campuses.  He then went on to note how heavily the Ivy League's faculty donated to Barack Obama in the 2012 elections.

In the 2012 presidential race, according to Federal Election Commission data, 96% of all campaign contributions from Ivy League faculty and employees went to Barack Obama.  There was more disagreement among the old Soviet politburo than there is among Ivy League donors.
...
Neither party has a monopoly of truth or God on its side. When 96% of Ivy League donors prefer one candidate to another, you really have to wonder whether students are being exposed to the diversity of views that a great university should offer.  A university cannot be great if its faculty is political homogeneous.

Now keep in mind, this is the guy that banned large drinks and ordered restaurants in NYC to stop using lard in their cooking. This is Mr Nanny State, he's not a conservative in any sense of the word whatsoever.  He endorsed and enthusiastically supported President Obama for president in both 2008 and 2012.  Now Bloomberg went off on a weird tangent about gun control presumably to certify his leftist credentials and Ace tore him apart on that, but Bloomberg still makes a critical point. Even he can see a problem with utterly blocking and denying debate on any substantive issue in an educational setting.
In just this year several commencement speakers and special guest speakers at colleges were blocked simply because they would not follow the leftist party line; they were outside the accepted range of ideas and thought and must be prohibited a voice at college. Harry Enten at 5:38 took a look at commencement speakers at major colleges and universities across America and saw a distinct and obvious pattern:

Former secretary of state Condoleezza Rice recently pulled out of giving the commencement address at Rutgers University after students protested. Rice was just the latest would-be commencement speaker to face criticism and withdraw. The head of the International Monetary Fund, Christine Lagarde, bowed out of speaking at Smith College after students there protested. Robert Birgeneau, who was chancellor at the University of California, Berkeley when police used batons to break up an Occupy protest, declined to attend the graduation ceremony at Haverford College, where he was set to receive an honorary degree. Students and faculty had objected to the visit.

For the 2013 and 2014 commencement seasons, I looked up the guest commencement speaker at the top 30 universities and the top 30 liberal arts colleges as rated by U.S. News and World Report. In cases where there was no guest commencement speaker, I took the guest baccalaureate, class day or senior day speaker.
...
As it turns out, I couldn’t find a single clearly aligned Republican political figure who spoke at any of these schools in the past two years. (Two tables showing all the speakers are at the bottom of this post.) Twenty-five Democrats spoke. Eleven Democrats gave the main commencement address among the top 30 universities, including House Minority Leader Nancy Pelosi and former Mississippi governor and current Secretary of the Navy Ray Mabus. At the top 30 liberal arts schools, it was 14 Democrats.

Even in years before that, few actual conservative speakers were ever allowed, even when Republican speakers manged to get an invite and successfully speak.  How much impact and how important are these speeches to young people?  I'd guess virtually nil.  But that's not the point I'm getting to here.
If you at college refuse to allow any dissenting voice to even be heard, what does that say about the quality and diversity of voices that are allowed?  Comedian Dana Gould has a bit where he goofs on his WASPY father who is willing to listen to anyone "be they white and Catholic, or Catholic and white."  And that's the attitude you get on too many college campuses.  They will celebrate and allow any diversity of voice and multicultural influence... as long as it agrees with their politics.
Now, this is bad for education and is more along the lines of an indoctrination camp, a cult campus where you get one party line and shun anyone who dares disagree.  Hundreds of stories and court cases from students and faculty who dared question the leftist perspective attest to how rigid this is becoming.
But there's a problem here for the left.  As Mayor Bloomberg points out, it wasn't all that terribly long ago when the left was the outsider, the guys trying to get control of culture.  And when they tried, the right often silenced them, shunned them, shut them out, particularly on college campuses.
That didn't work out so well did it?
See, the more you try to silence and shun something, the more forbidden, mysterious, and "transgressive" it becomes.  And as a result, the more attractive it becomes to college age kids.  By making conservatism the "other" it becomes the oppressed minority, the target of powerful tyranny rather than the source of it.  The more you keep something from young people the more attractive it becomes.
And further, the less free speech you allow, the more interesting and persuasive those alternate voices become.  Because the left is solidly and comfortably in power in every single institution and cultural structure in America, let alone the western world.  And the main lever that the left has on young people is to say "things could be better, do it our way."
Well we've been doing it their way for quite a while now.  And things are not only not better, in a lot of ways, they're worse.  The great voice of hope and change turned out to be just another politician, distinct only in his incompetence.  The left argues that they just need more time, more money, more power.  But as that happens, young people may very well begin to notice how this is turning out.
And when they do, they'll also notice a different point of view which is being denied them, a mysterious outsider voice, a group that isn't allowed to speak openly, which makes them mysterious and interesting.
So suddenly instead of being the institution and the mainstream which the left is distinct and attractively opposed to, the right becomes that attractive alternative, the rebel voice offering a different way to fix what has gone wrong.
Will that happen?  I don't know, I suspect we'll reach a crisis point at which all the old institutions and structures will fail and all the patterns we're used to and understand will collapse.  But this is something that the left really should consider.  Particularly the very people who out of one side of their mouth talk about free speech, tolerance, and diversity.
Even Rush Limbaugh says he doesn't want his opposition to disappear.  He wants them to always be around in a clinical way, like a batch of polio in a lab that teaches us how wrong they are.  Trying to utterly silence and remove the voice of dissent just has not worked out well in the past.
Posted by Christopher R Taylor at 8:51 AM