I am an independent writer, which means I publish my own work instead of going through a publishing house.  That's as opposed to a vanity writer, who pays a publisher to print their own work; the distinction might seem obscure but its significant: I get paid for my work, instead of paying someone else.  Not much mind you, but paid.
Because I'm not a printing house, I have to rely on someone else to print my work.  At first, when I came out with my first book (The Fantasy Codex) in 2006, I used LazerQuik printers in town here.  It was a matter of giving them the files on a disc and they printed me a box of Codices.  Eventually I managed to sell most of them, but it was a major expense up front and difficult to reach out to more distant buyers.
Then  I found Lulu.com.  This company is an online print-on-demand (POD) business that lets you upload the files you desire and build a book, then print as many as you wish.  Even more handy is that they have a store so other people can print and buy your books as you wish; Lulu takes the lion's share of the money and give you some based on how you price your book.
Now, they take more than I wish, but the convenience and ease of sales make up for a lot of that.  Personally I'd prefer making more than about 10% off each book, but that's the best I can do right now and reasonably expect sales.
I've used Lulu for a while now and they have been pretty solid in terms of quality.  However, Lulu isn't the only game in town.  Amazon has partnered with (or perhaps owns, I'm not sure) a company called CreateSpace.  This company is set up to help people print their own books and materials as well, a POD company.  However, CreateSpace is tied to Amazon, so once you get a book set up and ready to sell on there, it goes on the world's largest book seller's website automatically.
This is, I admit, a major advantage, and one I'm looking into.  There are several other different POD companies out there of varying quality and validity, such as Lightning Source, but these are the top two.  I'm trying out CreateSpace but as I started working on it, I noticed some interesting things.
For example, Lulu allows you now to print books in proper paperback form, rather than "trade" which is larger and less popular with readers.  Book readers are strangely conservative and traditional, so they don't care for oddly sized and shaped fiction, and they want things the way they've always had it, even without realizing it consciously.  Having books printed in the right size makes Lulu's POD service very attractive, since nobody else offers it that I can find on the internet.
What's the difference?  Here's a photo showing both sizes: "pocket" and trade paperback size.  The smaller one is the same size as your basic paperback you have nearby: 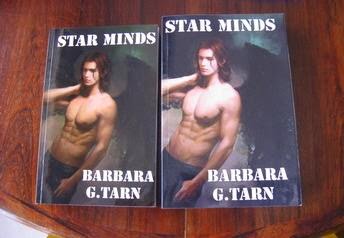 Now I'm able to offer both Snowberry's Veil and Old Habits in regular paperback book size, which is a big help in promoting my work - and get this, the smaller book size is cheaper, a lot cheaper, so I don't have to charge 15 bucks for a book to get any profit.
However, there are drawbacks.  First, the paper.  This isn't something I remember ever paying attention to, but take a look at a sheet of paper from your printer and a page from a paperback (go ahead and grab them both, I'll wait).
See the difference in color and texture?  Printer paper is crisp white stuff and the pages of your paperback are softer and more cream colored.  There's historical reason for this: Paperbacks were the red headed stepchild of printing, the cheap crappy version of a book that was knocked off on cheap paper and printed quick and dirty for wider distribution.  They cost a lot less than hardbound books and are more disposable - you can cram one in your pocket and carry it around without feeling too badly about it.
But now, when people read a paperback, they expect not only that certain size, but the look and feel of a paperback.  They want that cheap crappy paper because that's what they're used to and comfortable with.  And Lulu does not offer cream colored paper with their paperbacks.  So that's a major strike against the company.  CreateSpace does, but again; wrong paperback size.
Now, both companies allow you to upload and will tell you if something is wrong with your basic text.  Lulu warns you if you upload an improperly formatted page size in your document that it is a different size from your chosen book.  Heed this warning.