FROM LIGHT INTO SHADOW

"These people are playing with matches… I don’t think they understand the scope and scale of the wildfire they are flirting with." 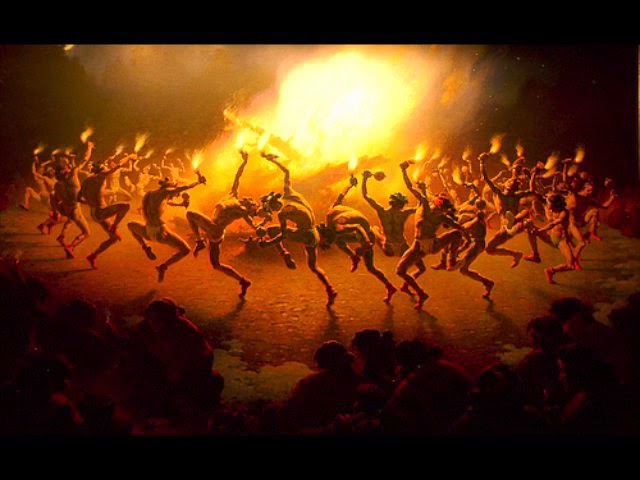 Can you hear the drums?  They aren't off in the distance any more, they're next door.  They are very rhythmic and primal, they get you at the gut, where your emotions are.
People write about civilization vs barbarism and the danger of collapse we face.  I've done it in the past, comparing barbarity with civilization and examining where civilization ends and barbarism begins, and I've written about how liberty seems to inevitably lead to collapse, that the end result of civilization is to suicide.  But the more I think about it, the more I think the danger is not barbarity, but turning primitive.
Consider the culture we now live in.  We have all the trappings of civilization; we have a system of education, laws, a shared language, a written language, organized entertainment, artistic expression, and so on.  There is comfort, peace, safety, and structure of a society.  We seem civilized.
But increasingly, the culture is primitive.  Just look at a few aspects of our culture and how they display primitivism.
In the end, I'm left with the vision of not civilization at all, not even barbarism.  We're a bone's throw away from living in a cave.  We have some of the appearance of civilization, but we're increasingly pre-civilization.  We have wonderful comforts and distractions, but then so did people in Tahiti.  But that didn't make them civilized.
This is something cultural relativists actually get right: those barbaric cultures had a civilization, of sorts.  The Iroquois had a language, the Germanic tribes had education and medicine.  No group of humans on earth ever were utterly without any civilized structures whatsoever.  Even in a Lord of the Flies setting, people build up cultural structures and are as civilized are they are able.
The difference is the level of sophistication and meaning in a culture, not its furniture.  Having music and art and education doesn't make a group civilized, it makes them human.  What you do with that, why its there, what it says and how it affects the culture is what makes them civilized.  The bare existence of medicine and language isn't enough, it has to do something greater and more meaningful than mere pragmatic application.
Civilization is when you take that written language and write The Odyssey.  Civilization is when you take those instruments and write The Messiah.  Having the ability to discuss ideas matters only when you take it to places like The City of God or Plato's Dialogues.  Being able to craft art only matters when you produce something like Mona Lisa or The Maltese Falcon.
As much as I like The Avengers, it was meaningless junk.  It was entertaining but shallow as a sheet of paper.  There's a time and place for that, not everything has to be wonderful and deep, but if that's the pinnacle of your civilization... you're not civilized at all.
The film Idiocracy put this all down to demographics.  The film proposed that over the centuries the smart people didn't have many, or any, kids, and the dumb people bred like rabbits and just overwhelmed the world.  But if you look around you can see that its happening in less than a generation and not by breeding.  The stupid and shallow has taken over western culture while presenting its self as amazingly intellectual and erudite.
The truth is, this shift is ideological; that is, it is based on what people believe and why, what they think is important and true, and what they understand about life.  There's a piece at Taxi Cab Depressions which presents its self as an encounter with a curmudgeon which is very powerful and compelling.
Called The Pig Trap, its an examination of the slow prison we've allowed to be built around us and what it means to us.  The (probably apocryphal) person in the piece says:

...the sad truth is that 95% of the problems we have in this country could be solved tomorrow, by noon… simply by dragging 100 people out in the street and shooting them in the f***ing head.”

And lemme tell ya, he had the list… he rattled off 25 or 30 names of well-known, prominent politicians, mostly Democrats, but a few Republicans, several members of the current Cabinet, a couple of Obama’s “czars”, a couple of figures from the Bush administration and the Republican establishment, several media company executives and on-camera newscasters, reporters, and pundits, a couple of people who are active in leftist politics but not in elected office… he had obviously thought about this to some degree already.

He's right.  This is critical to understand: large cultural movements almost always are driven by small groups of very dedicated people.  The American Revolution involved a small segment of the population and only about a third of the colonists are estimated to truly back the idea of revolt against the King.
Its easy to be cynical about this and declare with condescension "well most people are stupid and worthless so they are easily led around like sheep mbaaa," but the truth is, I believe, much less cold.  People are busy.  They have their lives, they are chasing that naked toddler around the house with a towel trying to dry them off after the bath.  They have to get the dishes done, and that TPS report finished, and read that next chapter for their report, and tear down the transmission on that K-Car before noon.  Everyone has a life, and most of those people's lives are so full they don't have time or inclination to think about the whys and the wherefores.
So they trust others to do so, or at least rely on them when it comes up.  OK, what he says sounds right, whatever, I gotta get this done.  They aren't inclined and don't have the time it takes to get to that right away, and so they delegate the ideas and the cultural shifts to others, hoping they do it right.  Sure, most people are pretty easily manipulated by slick packaging, emotional appeals, and clever language.  That's why advertising works.  That's why politicians campaign.
So a combination of no time and credulity tends to work.  A small group of people can do an awful lot of damage - or good - by being tireless and focused and dedicated.  Now, my response would never be to shoot them.  Killing people for doing what I disagree with and believing things I don't care for is more evil than what they are doing.  That is the wrong response, and I reject it without qualification.
But the basic concept is valid: if this small group of people - and I have no doubt most of you can list a lot of them off the top of your head - were gone, then the rest wouldn't have the understanding, drive, or zealotry to keep it going.  They are driving this and claiming majority status in the process, but are a small number.
This isn't a case of just a demographic shift over time; if that was true, we'd becoming significantly more conservative as the left slaughters its own offspring by the thousands every day.  The truth is, its not a smart/dumb divide in childbirth in any case.  Its an urban/rural one in most cases; the urbanites have fewer children while the rural have more.  Often its ethnic as well, as immigrants have more children and long generational citizens do not.  That has nothing to do with intellect.  There's a snobbish appeal to the thought that we smart people are more cautious about childbirth and woe unto our culture, but that's just not very valid.
Our situation is the result of a change in worldview that demolished nearly everything in the past without anything substantive to replace it other than well meaning and hope.  Someone asked on Facebook what you'd say to someone who time traveled here from the mid 20th century to try to explain things and I responded with this:

Everything you held dear and believed in is now considered evil and banned, while everything you thought was crazy and sick is celebrated and protected

Patriotism?  Family?  American culture?  Faith?  All evil.  Homosexuality, abortion, adultery, pornography, etc?  All good.
This didn't happen because we bred ourselves stupid, it happened because we chose to abandon basic foundational truths for what we hoped and wished would be true instead.  This happened because of a shift in worldview from absolutes to relativism.  This happened because what you want and try is now more important than what you accomplish and succeed at.  Sure that idea didn't work, but you meant well and its a good idea, so it worked anyway because there's a deeper truth here and you're a racist homophobe for doubting it, you bitter bible-clinger.
And as this has taken place, all the things that make up true civilization have fallen apart and been replaced with the drum-hammering bone-in-the-nose primitive, dressed in hipster clothing and sporting a beard from Noah's time.
But what Idiocracy got most right is that all of it will fall to pieces, not because people are so stupid they water their crops with energy drinks, but because they will be shamed into thinking water is evil and we should abandon our old ways.
*Hat tip to American Digest for the Taxi Cab Depressions link.
Posted by Christopher R Taylor at 12:16 PM