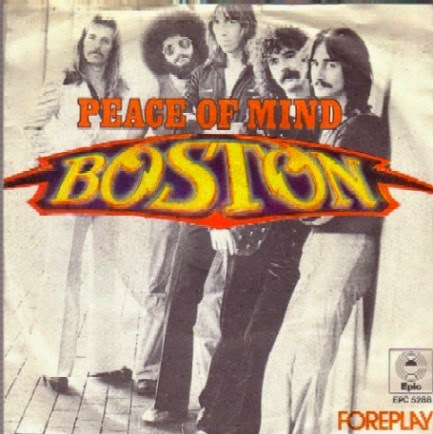 Boston has a lot of songs that are easy to listen to, memorable, have a great sound, but don't burrow into your ear and stay there all day like tinnitus.  Too much modern music is built around a catchy hook or groove and a beat and offer little else, so they just sit in your mind and repeat over and over until you go insane or hear something more substantial to replace it.
Behind that music, however, are many songs with a deeper and more significant meaning in the lyrics than is initially observed by most.  People associate Boston with good time rock and roll, and songs like "Party" and "Smokin" definitely fit those themes, but there's more to the band.
Whether due to personal problems and ideas or just an appreciation of the theme, Boston's songwriter Tom Scholz returns to the idea of depression, motivation, and facing problems with songs like "Man I'll Never Be" which I wrote about in the past in this series.  Boston only rarely (on their worst disc Corporate America) deals with protest themes and social justice, mostly they just deal with personal issues and memories.
In the song "Peace of Mind" Boston deals with a perspective on life I think many can appreciate, especially these days.  Its about someone who just wants to be left alone and live a good life, not a life of stress and regulation, but a free life.  "People have advice they just keep on givin'" the song says, and these days that "advice" too often seems like or actually is a command.  We've gone beyond "people ought to get along" to "you must get along in the way I say or you will be punished" in too many cases.
Think of the future, realize there's more to life than your riches or your pet themes and ideas.  Understand that the world is not about political victory, your ideology, or riches.
"All I want to have is my peace of mind," the song goes.  I just want to be left alone, and find peace, not struggle with the world, not fight hard to get ahead.  The conflicts and confusion of life leave him cold, he just wants to live life, not fight and struggle every day, and I'm sure everyone has felt that way at least sometimes in their life.
And, since this is Boston, you get glorious overlayered soaring guitars and even more soaring singing by Brad Delp.  Its not just thoughtful, its delivered in an artistic, enjoyable manner.  This is the kind of thing rock is supposed to do, not just make you groove or dance, but give you beauty and art with something to think about.
Now if you're feelin' kinda low 'bout the dues you've been paying
Future's coming much too slow
And you wanna run but somehow you just keep on stayin'
Can't decide on which way to go
Yeah, yeah, yeah

I understand about indecision
But I don't care if I get behind
People li vin' in competition
All I want is to have my peace of mind.

Now everybody's got advice they just keep on givin'
Doesn't mean too much to me
Lot's of people out to make-believe they're livin'
Can't decide who they should be.


*This is part of the Songs I Like series.
Posted by Christopher R Taylor at 9:29 AM